Prior to her birth, her aging father Henry had recognized his nephew, Cont Baldwin V of Hainaut, as his heir presumptive. However, the 72-year-old count fathered a daughter, Ermesinde, who displaced Baldwin as heir presumptive. Upon Henry's death ten years later, a war of succession inevitably took place. At its end, it was decided that Count Henry's fiefs would be split: Baldwin would have Namur, Ermesinde would have Durbuy and La Roche, and Luxembourg would revert to their common liege, the Holy Roman Emperor. Emperor Henry VI then gave the fief to his brother Otto.

Ermesinde was initially betrothed to Henry II of Champagne, but the engagement was cancelled in 1189. Instead her first husband was Theobald I of Bar (1158–1214). He successfully negotiated with Otto I, Count of Burgundy, for the latter's renunciation of Luxembourg, thus making Theobald and Ermesinde the Count and Countess of Luxembourg. When Theobald died in 1214, Ermesinde married Waleran III, Count of Limburg (1180–1226), who would rule as the Count of Luxembourg. In 1223 Ermesinde and Waleran pressed their claim to Namur against Margrave Philip II, but were ultimately unsuccessful. 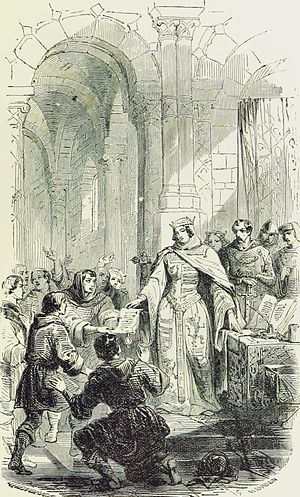 Ermesinde granting charters of freedom to the city of Echternach

After Waleran's death, Ermesinde ruled Luxembourg alone for two decades. She proved to be an effective administrator, granting charters of freedom to several towns and increasing the prosperity of her country.

Legend has it that the Countess was one day walking in the area around her castle, near Eischen. There she saw a woman coming down from a hill, who had in her arms a child that was wrapped in sheepskin, on which was a black cross.

The Countess was convinced that this was the Virgin Mary, and therefore planned the construction on this spot of the abbey that would later become the Abbey of Notre-Dame de Clairefontaine. In her will she asked that she be buried at this location. The Abbey of Clairefontaine was in fact only built by her son, Henry V. After many years, the abbey was destroyed in the late 18th century by French troops.

The Jesuits then reconstructed a part of it from 1875 to 1877, including the old chapel. During these works, the Jesuit monk Martin Paul on 11 May 1875 found a gravestone, along with human remains. Next to the skeleton was a plaque with the inscription: "Voici les precious ossements de la très Illustre et Pieuse Princesse Ermesinde, Comtesse Souveraine de Luxembourg et de Namur. Notre heureuse fondatrice que Dieu Glorifie et sans fin Bénisse" (Here lie the precious remains of the very Illustrious and Pious Princess Ermesinde, Sovereign Countess of Luxembourg and Namur. Our founder whom God Glorifies and forever Blesses") In 1747, shortly before the old abbey was destroyed by the French, the nuns had hidden Ermesinde's remains here.

Currently, the remains are in the crypt of the chapel of Clairefontaine.

The children of Ermesinde and her first husband, Theobald I of Bar, were:

The children of Ermesinde and Waleran III, Count of Limburg were: