Ernest Thompson Seton (August 14, 1860 – October 23, 1946) was an author (published in the United Kingdom, Canada, and the US), wildlife artist, founder of the Woodcraft Indians, and one of the founding pioneers of the Boy Scouts of America (BSA). Seton also influenced Lord Baden-Powell, the founder of Scouting. His notable books related to Scouting include The Birch Bark Roll and The Boy Scout Handbook. He is responsible for the appropriation and incorporation of what he believed to be American Indian elements into the traditions of the BSA.

Ernest Thompson Seton, born Ernest Evan Thompson[1] in South Shields, County Durham (now part of South Tyneside, Tyne and Wear), England of Scottish parents, Seton's family emigrated to Canada in 1866. Most of his childhood was spent in Toronto. As a youth, he retreated to the woods to draw and study animals as a way of avoiding his abusive father. He won a scholarship in art to the Royal Academy in London, England.[2]

On his twenty-first birthday, Seton's father presented him with a bill for all the expenses connected with his childhood and youth, including the fee charged by the doctor who delivered him. He paid the bill, but never spoke to his father again.[3][4]

Ernest changed his name to Ernest Thompson Seton, believing that Seton had been an important family name. He became successful as a writer, artist and naturalist, and moved to New York City to further his career. Seton later lived at Wyndygoul, an estate that he built in Cos Cob, a section of Greenwich, Connecticut. After experiencing vandalism by the local youth, Seton invited them to his estate for a weekend where he told them what he claimed were stories of the American Indians and of nature.[5] 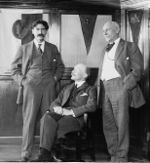 Seton met Scouting's founder, Lord Baden-Powell, in 1906. Baden-Powell had read Seton's book, The Birch Bark Roll of the Woodcraft Indians, and was greatly intrigued by it. The pair met and shared ideas. Baden-Powell went on to found the Scouting movement worldwide, and Seton became the president of the committee that founded the Boy Scouts of America (BSA) and was its first (and only) Chief Scout. The position of Chief Scout was removed, and the position "Chief Scout Executive" was taken on by James West. His Woodcraft Indians (a youth organization), combined with the early attempts at Scouting from the YMCA and other organizations, and Daniel Carter Beard's Sons of Daniel Boone, to form the BSA.[6] The work of Seton and Beard is in large part the basis of the Traditional Scouting movement.[7]

Seton was Chief Scout of the BSA from 1910–1915 and his work is in large part responsible for the appropriation and incorporation of what he believed to be American Indian elements into the traditions of the BSA. However, he had significant personality and philosophical clashes with Beard and James E. West.

In addition to disputes about the content of Seton's contributions to the Boy Scout Handbook, conflicts also arose about the suffrage activities of his wife, Grace Gallatin Seton Thompson, and his British citizenship. The citizenship issue arose partly because of his high position within BSA, and the federal charter West was attempting to obtain for the BSA required its board members to be United States citizens. Seton drafted his written resignation on January 29, 1915, but he did not send it to BSA until May.[8]

Seton married twice. His first marriage was to Grace Gallatin in 1896. Their only daughter, Ann, was born in 1904 and died in 1990. Ann, who later changed her first name, became a best-selling author of historical and biographical novels as Anya Seton. According to Ann's introduction to the novel Green Darkness, Grace was a practicing Theosophist. Ernest and Grace divorced in 1935, and Ernest soon married Julia M. Buttree. Julia would write works by herself and with Ernest. They did not have any biological children, but did adopt an infant daughter, Beulah (Dee) Seton (later Dee Seton Barber), in 1938. Dee Seton Barber, a talented embroiderer of articles for synagogues such as Torah mantles, died in 2006.

Seton early in his writing career

Seton was an early pioneer of the modern school of animal fiction writing, his most popular work being Wild Animals I Have Known (1898), which contains the story of his killing of the wolf Lobo. He later became involved in a literary debate known as the nature fakers controversy, after John Burroughs published an article in 1903 in the Atlantic Monthly attacking writers of sentimental animal stories. The controversy lasted for four years and included important American environmental and political figures of the day, including President Theodore Roosevelt.[9]

In 1907, Seton and the naturalist Edward Alexander Preble verified a claim from ten years earlier by the frontiersman Charles "Buffalo" Jones that Jones and his hunting party of musk oxen had shot and fended off a hungry wolf pack near the Great Slave Lake in Canada. Seton and Preble discovered the remains of the animals near Jones's long abandoned cabin.[10]

For his work, Lives of Game Animals, Volume 4, Seton was awarded the Daniel Giraud Elliot Medal from the National Academy of Sciences in 1928 .[11] In 1931, he became a United States citizen. Seton was associated with the Santa Fe arts and literary community during the mid-1930s and early 1940s, which comprised a group of artists and authors including author and artist Alfred Morang, sculptor and potter Clem Hull, painter Georgia O'Keeffe, painter Randall Davey, painter Raymond Jonson, leader of the Transcendental Painters Group, and artist Eliseo Rodriguez.[12] He was made a member of the Royal Canadian Academy of Arts.[13]

He died in Seton Village in northern New Mexico at the age of eighty-six. Seton was cremated in Albuquerque. In 1960, in honor of his 100th birthday and the 350th anniversary of Santa Fe, his daughter Dee and his grandson, Seton Cottier (son of Anya), scattered the ashes over Seton Village from an airplane.[14] 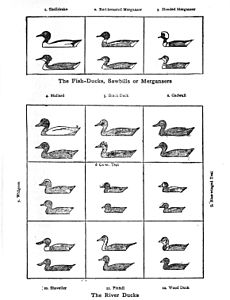 The Philmont Scout Ranch houses the Seton Memorial Library and Museum. Seton Castle in Santa Fe, built by Seton as his last residence, housed many of his other items. Seton Castle burned down in 2005 during an attempt at restoration; fortunately all the artwork, manuscripts, books, etc., had been removed to storage before renovation was to have begun.[15]

The Academy for the Love of Learning, an educational organization in Santa Fe, acquired Seton Castle and its contents in 2003. The new Academy Center opened in 2011 includes a gallery and archives featuring artwork and other materials as part of its Seton Legacy Project. The Seton Legacy Project organized a major exhibition on Seton opening at the New Mexico History Museum on May 23, 2010, the catalog published as Ernest Thompson Seton: The Life and Legacy of an Artist and Conservationist by David L. Witt.

Roger Tory Peterson drew inspiration for his field guide from the simple diagram of ducks that Seton included in Two Little Savages.[16]

Several of Seton's works are written from the perspective of a predator and were an influence upon Robert T. Bakker's Raptor Red.[17]

Seton is honoured by the Ernest Thompson Seton Scout Reservation in Greenwich, Connecticut, USA, and with the E.T. Seton Park in Toronto, Canada. Obtained in the early 1960s as the site of future Metro Toronto Zoo, the land was later used to establish parkland and home to the Ontario Science Centre. Seton is mentioned in Philip Roth's Novel, Nemesis, where he is credited for having introduced Indian lore to the American camping movement.[18]

In 1979 a cartoon based on Seton's 1922 book Bannertail: The Story of a Gray Squirrel was produced in Japan. Shīton Dōbutsuki Risu no Banā (Japanese: シートン動物記 りすのバナー, English: "Bannertail: The Story of Gray Squirrel") is a 26-episode animation produced by Nippon Animation. In 1989-1990, Eiken Animation of Japan released Seton Doubutsuki (Japanese: シートン動物記, English: "Seton Animal Chronicles") a 45-episode cartoon TV series that depicts the different literary works of Seton including his 1898 Wild Animals I Have Known. Notable episodes include: "Lobo, the King of Currumpaw" (Episode 17 & 18), which many viewers later came to know when the storyline was plotted into a popular 2009 TV documentary entitled, The Wolf that Changed America. The cartoon was dubbed in German, Catalan and Arabic and saw an emerging popularity among Arabs in the early 1990s (Arabic: مخلص صديق الحيوان "Mokhles Sadik ul Hayawaan").

The cartoon was an adaptation from its precursor cartoon book entitled Seton's Wild Animals (Japanese: シートン動物記) by Sanpei Sirato published between 1961 and 1965 and consisting of a total of five volumes. Kenji Uchiyama translated Seton's work for the cartoon book from English into Japanese.

In October 2015 the Comedy Central Show 'Drunk History' gave a short, drunk history lesson by Mike Still (season 3, episode 10, second act). It mostly concentrates on the story of Lobo but also mentions the roots of the Boy Scouts and helping out troubled teens.

In a 1993 issue of the Japanese manga Diamond is Unbreakable, the character Jotaro Kujo references E. T. Seton's quote "there is no animal that cannot be tracked".[19]

Manga artist Jiro Taniguchi and scenarist Yoshiharu Imaizumi published a manga in 4 volumes, romanticizing the life of Seton: シートン, Shīton, 2004-2006. These manga were not translated into English, but appeared in French, Italian and Spanish. Here are the French titles: