For other individuals with the same surname, see Hanfstaengl family.

Ernst Franz Sedgwick Hanfstaengl (2 February 1887 – 6 November 1975) was a German businessman who was an intimate of Adolf Hitler before falling out of favour and defecting. He later worked for Franklin D. Roosevelt and was once engaged to the author Djuna Barnes.

Ernst Hanfstaengl, nicknamed "Putzi",[1] was born in Munich, Bavaria, Germany, the son of a German art publisher, Edgar Hanfstaengl, and an American mother. He spent most of his early years in Germany and later moved to the United States. His mother was Katharine Wilhelmina Heine, daughter of William Heine, a cousin of American Civil War Union Army general John Sedgwick. His godfather was Duke Ernst II of Saxe-Coburg and Gotha. He had an elder sister, Erna,[2] two elder brothers Edgar and Egon, and a younger brother Erwine.[3]

He attended Harvard University and became acquainted with Walter Lippmann and John Reed. A gifted pianist, he composed several songs for Harvard's football team. He graduated in 1909.

He moved to New York and took over the management of the American branch of his father's business, the Franz Hanfstaengl Fine Arts Publishing House. On frequent mornings he would practice on the piano at the Harvard Club of New York, where he became acquainted with both Franklin and Theodore Roosevelt. Among his circle of acquaintances were the newspaper baron William Randolph Hearst, author Djuna Barnes (to whom he was engaged), and actor Charlie Chaplin.

Upon the outbreak of the First World War, he asked the German military attaché in New York Franz von Papen to smuggle him back to Germany. Slightly baffled by the proposal, the attaché refused and Hanfstaengl remained in the U.S. during the war. After 1917, the American branch of the family business was confiscated as enemy property.

On 11 February 1920, Hanfstaengl married Helene Elise Adelheid Niemeyer of Long Island. Their only son, Egon Ludwig, eventually enlisted in the US Army Air Corps. A daughter, Hertha, died at the age of five.

Returning to Germany in 1922, he was living in his native Bavaria when he first heard Hitler speak in a Munich beer hall.[4] A fellow member of the Harvard Hasty Pudding club who worked at the U.S. Embassy asked Hanfstaengl to assist a military attaché sent to observe the political scene in Munich. Just before returning to Berlin the attaché, Captain Truman Smith, suggested to Hanfstaengl to go to a Nazi rally as a favor and report his impressions of Hitler. Hanfstaengl was so fascinated by Hitler that he soon became one of his most intimate followers, although he did not formally join the Nazi Party until 1931. "What Hitler was able to do to a crowd in 2½ hours will never be repeated in 10,000 years," Hanfstaengl said. "Because of his miraculous throat construction, he was able to create a rhapsody of hysteria. In time, he became the living unknown soldier of Germany."

Hanfstaengl introduced himself to Hitler after the speech and began a close friendship and political association that would last through the 1920s and early 1930s. After participating in the failed Beer Hall Putsch in 1923, Hanfstaengl briefly fled to Austria, while the injured Hitler sought refuge in Hanfstaengl's home in Uffing, outside of Munich. Hanfstaengl's wife, Helene, allegedly dissuaded Hitler from committing suicide, when the police came to arrest him.

For much of the 1920s, Hanfstaengl introduced Hitler to Munich high-society and helped polish his image. He also helped to finance the publication of Hitler's Mein Kampf, and the NSDAP's official newspaper, the Völkischer Beobachter. Hitler was the godfather of Hanfstaengl's son Egon. Hanfstaengl wrote both Brownshirt and Hitler Youth marches patterned after his Harvard football songs and, he later claimed, devised the chant "Sieg Heil". Included among Hanfstaengl's friends during this period were Hanns Heinz Ewers and fellow Nazi Party worker and journalist Kurt Lüdecke.

Fluent in English, with many connections to higher society both in Britain and the United States, he became head of the Foreign Press Bureau in Berlin. Aside from this official position, much of his influence was due to his friendship with Hitler, who enjoyed listening to "Putzi" play the piano. Hanfstaengl later claimed to have alerted Hitler and Hermann Göring about the Reichstag fire.

When Winston Churchill was staying at the Hotel Regina in Munich in the summer of 1932, Hanfstaengl introduced himself and said he could easily arrange a meeting with Hitler there since he came to the hotel every evening around five o'clock. At that time Churchill said he had no national prejudices against Hitler and knew little of his "doctrine or record and nothing of his character". In the course of the conversation with Hanfstaengl however Churchill said, "Why is your chief so violent about the Jews? I can quite understand being angry with the Jews who have done wrong or who are against the country, and I understand resisting them if they try to monopolise power in any walk of life; but what is the sense of being against a man because of his birth? How can a man help how he is born?" Hanfstaengl according to Churchill, must have related this to Hitler because the next day around noon he came to the hotel to tell him that Hitler would not be coming to see him after all. Hitler thus lost his chance to meet with Churchill on his own terms and Churchill likewise refused to meet with him on several subsequent occasions. The Gathering Storm. By Winston S. Churchill. Chapter V. (1948) 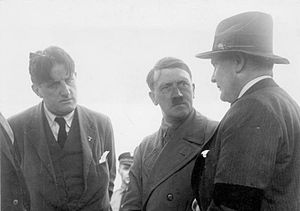 As the NSDAP consolidated its power, several disputes arose between Hanfstaengl and Germany's Propaganda Minister, Joseph Goebbels. Hanfstaengl was removed from Hitler's staff in 1933. He and Helene divorced in 1936. Hanfstaengl fell completely out of Hitler's favour after he was denounced by Unity Mitford, a close friend of both the Hanfstaengls and Hitler.

In 1937, Hanfstaengl received orders to parachute into an area held by the nationalist side of the Spanish Civil War, to assist in negotiations. While on board the plane he feared a plot on his life and learned more details from the pilot about the mission, who eventually admitted he had been ordered to drop Hanfstaengl over republican-held territory, which would have meant almost certain death. The pilot eventually landed on a small airfield after claiming an engine malfunction following a brief talk with Hanfstaengl, which allowed him to escape.

This version of the story was related by Albert Speer in his memoirs, who stated that the "mission" to Spain was an elaborate practical joke, concocted by Hitler and Goebbels, designed to punish Hanfstaengl after he'd displeased the Führer by making "adverse comments about the fighting spirit of the German soldiers in combat" in the Spanish Civil War. Hanfstaengl was issued sealed orders from Hitler which were not to be opened until his plane was in flight. These orders detailed that he was to be dropped in "Red Spanish territory" to work as an agent for Francisco Franco. The plane, according to Speer, was merely circling over Germany containing an increasingly disconcerted Hanfstaengl, with false location reports being given to convey the impression that the plane was drawing ever closer to Spain. After the joke had played itself out, the pilot declared he had to make an emergency landing and landed safely at Leipzig Airport.[5] Hanfstaengl was so alarmed by the event that he defected soon afterward.

In a late 1960s interview at his home in Schwabing (Munich), Hanfstaengl said he was convinced he was to be tossed out of the plane sans parachute over northern Germany.[citation needed]

He made his way to Switzerland and after securing his son Egon's release from Germany, he moved to Britain where he was imprisoned as an enemy alien after the outbreak of the Second World War. He was later moved to a prison camp in Canada. In 1942, Hanfstaengl was turned over to the U.S. and worked for President Roosevelt's "S-Project", revealing information on approximately 400 Nazi leaders. He provided 68 pages of information on Hitler alone, including personal details of Hitler's private life, and he helped Professor Henry Murray, the Director of the Harvard Psychological Clinic, and psychoanalyst Walter C. Langer and other experts to create a report for the OSS, in 1943, designated the "Analysis of the Personality of Adolph Hitler". In 1944, Hanfstaengl was handed back to the British, who repatriated him to Germany at the end of the war. William Shirer, a CBS journalist who resided in Nazi Germany until 1940 and was in frequent contact with Hanfstaengl, described him as an "eccentric, gangling man, whose sardonic wit somewhat compensated for his shallow mind."

Hanfstaengl wrote Unheard Witness (1957) (later re-released as Hitler: The Missing Years) about his experiences. In 1974, Hanfstaengl attended his 65th Harvard Reunion, where he regaled the Harvard University Band about the authors of various Harvard fight songs. His relationship to Hitler went unmentioned.

Hanfstaengl died in Munich in 1975. In 2004, his story was told by author Peter Conradi in his book Hitler's Piano Player: The Rise and Fall of Ernst Hanfstaengl, Confidante of Hitler, Ally of FDR.

Hanfstaengl has rarely been mentioned or portrayed in dramatisations of Hitler's life or of life in Nazi Germany. He was, however, an important supporting character in both the TV film Hitler: The Rise of Evil (in which he was portrayed by Liev Schreiber) and author Ron Hansen's historical fiction novel Hitler's Niece. He also features as a character in Roger L. Conlee's novel The Hindenburg Letter, set in Berlin in 1942, The Fox in the Attic by Richard Hughes and Faye Kellerman's novel Straight into Darkness, set in Munich in 1929. He was portrayed by British actor Ronald Pickup in the 1990 TV mini series The Nightmare Years, based on William Shirer's 1960 historical study, The Rise and Fall of the Third Reich. He was frequently mentioned in 2011's In the Garden of Beasts by Erik Larson, the story of the U.S. Ambassador (1933-1937) William E. Dodd and his family in prewar Berlin. Hanfstaengl is also profiled in Hitlerland: American Eyewitnesses to the Nazi Rise to Power.[6] He also appears as a character in W.E.B. Griffin's "Honor Bound" series which tells the story of fictional Marine officer and OSS agent Cletus Frade. He was played by Randy Quaid in (1982) Inside the Third Reich.[7]

In Saul Bellow's novel Herzog, Valentine Gersbach, previously the best friend of the title character until cuckolding him, is described as "somewhat resemb(ling) Putzi Hanfstaengl, Hitler's own pianist."[8]