From Infogalactic: the planetary knowledge core
Jump to: navigation, search
For other uses, see Erotica (disambiguation). 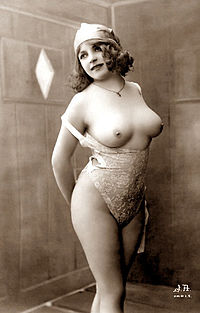 Curiosa is erotica and pornography as discrete, collectible items, usually in published or printed form.

Distinction is often made between erotica and pornography (as well as the lesser known genre of sexual entertainment, ribaldry), although some viewers may not distinguish between them. A key distinction, some have argued, is that pornography's objective is the graphic depiction of sexually explicit scenes, while erotica "seeks to tell a story that involves sexual themes" that include a more plausible depiction of human sexuality than in pornography.[2] Additionally, works considered degrading or exploitative tend to be classified by those who see them as such, as "porn" rather than as "erotica" and consequently, pornography is often described as exploitative or degrading.[2][3]