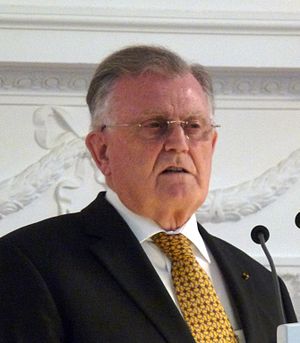 Erwin Teufel (born 4 September 1939 in Zimmern ob Rottweil) is a German politician of the CDU. Teufel was the leader of the CDU parliamentary faction in the state parliament (Landtag) of Baden-Württemberg from 1978 to 1991. He was minister-president of Baden-Württemberg and chairman of the CDU state party group from 1991 to 2005, serving as President of the Bundesrat in 1996/97. Teufel is an honorary member of A.V. Cheruskia Tübingen, a catholic student fraternity which is a member of the Cartellverband.