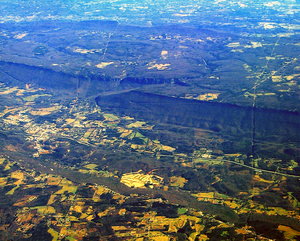 Escarpment face of a cuesta, broken by a fault, Cumberland Plateau, Tennessee

An escarpment is a steep slope or long cliff that occurs from faulting, tilting or warping and resulting erosion and separates two relatively level areas of differing elevations. Usually escarpment is used interchangeably with scarp (from the Italian scarpa, shoe[1]). But some sources differentiate the two terms, where escarpment refers to the margin between two landforms, while scarp is synonymous with a cliff or steep slope.[2][3] The surface of the steep slope is called a scarp face.

Scarps are generally formed by one of two processes: either by differential erosion of sedimentary rocks, or by vertical movement of the Earth's crust along a geologic fault. Most commonly, an escarpment is a transition from one series of sedimentary rocks to another series of a different age and composition.

Escarpments are also frequently formed by faults. When a fault displaces the ground surface so that one side is higher than the other, a fault scarp is created. This can occur in dip-slip faults, or when a strike-slip fault brings a piece of high ground adjacent to an area of lower ground.

More loosely, the term scarp describes the zone between coastal lowlands and continental plateaus which have a marked, abrupt change in elevation caused by coastal erosion at the base of the plateau.

Schematic cross section of a cuesta, dip slopes facing left, and harder rocklayers in darker colors than softer ones.

Earth is not the only planet where escarpments occur. They are believed to occur on other planets when the crust contracts, as a result of cooling. On other Solar System bodies such as Mercury, Mars, and the Moon, the Latin term rupes is used for an escarpment.

Shaded and colored image from the Shuttle Radar Topography Mission—shows an elevation model of New Zealand's Alpine Fault running about 500 km (300 mi) long. The escarpment is flanked by a vast chain of hills squeezed between the fault and the mountains of New Zealand's Southern Alps. Northeast is towards the top.

When sedimentary beds are tilted and exposed to the surface, erosion and weathering may occur. Escarpments erode gradually and over geological time. The mélange tendencies of escarpments results in varying contacts between a multitude of rock types. These different rock types weather at different speeds, according to Goldich dissolution series so different stages of deformation can often be seen in the layers where the escarpments have been exposed to the elements. These varying levels of erosion can lead to strange features forming in the exposed rock.

The Sierra Escarpment in California. 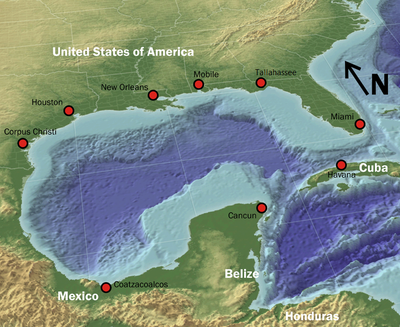 At the Florida Escarpment, seen in the eastern Gulf of Mexico, the sea bed drops precipitously from less than 300m to 3000m over a short distance.