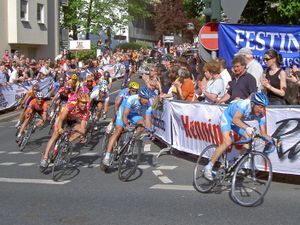 The Eschborn-Frankfurt City Loop (until 2008 Rund um den Henninger-Turm, sometimes called the Frankfurt Grand Prix in English; in 2010 Rund um den Finanzplatz Eschborn-Frankfurt) is a semi classic cycling race around Frankfurt am Main with the start and finish on Darmstädter Landstraße outside the Henninger-Turm (Tower), a grain silo belonging to the Henninger brewery which backs the event. The race takes place on a complicated route in the Taunus mountains west of the city with around 1500m (5,000 feet) of climbing. The climbs of the Ruppershain, Feldberg and Mammolshain have been regular features; the Mammolshain has a 26% gradient and is climbed twice in the race. The race concludes with three laps of 4.5 kilometres in the centre of Frankfurt.

The race, organised for many years by brothers Hermann and Erwin Moos, began in 1962 with Henninger as main sponsor to publicise the Henninger Tower opened in 1961. The event received classic status in 1967 when Paris–Brussels was forced off the calendar due to traffic problems.

Rund um den Henninger-Turm was part of the UCI Road World Cup for one year, 1995, with the HEW Cyclassic in Hamburg getting the German leg of the series. The event is also not part of the UCI ProTour. Observers say holding the race on 1 May, often midweek, counts against it.

In November 2007, organiser Bernd Moos said Henninger would stop backing the race after 2008. He said that after 46 years Henninger was pulling out because of economic conditions.[1] In January 2009 Moos said that the race would continue as the Eschborn-Frankfurt City Loop, named for new sponsors, Frankfurt and the neighboring town of Eschborn, which would also be the start of the race.[2][3] The race will no longer pass the Henninger Tower.

In 2015, the race was cancelled due to terrorist threats.[4]