Escheat /ᵻsˈtʃiːt/[1][2][3][4] is a common law doctrine which transfers the property of a person who dies without heirs to the Crown or state. It serves to ensure that property, once legally owned, never becomes legally unowned. It originally applied to a number of situations where a legal interest in land was destroyed by operation of law, so that the ownership of the land reverted to the immediately superior feudal lord.

The term "escheat" derives ultimately from the Latin ex-cadere, to "fall-out", via mediaeval French escheoir.[5] The sense is of a feudal estate in land falling out of the possession by a family into possession by the overlord.

In feudal England, escheat referred to the situation where the tenant of a fee (or "fief") died without an heir or committed a felony. In the case of such demise of a tenant-in-chief, the fee reverted to the King's demesne permanently, when it became once again a mere tenantless plot of land, but could be re-created as a fee by enfeoffment to another of the king's followers. Where the deceased had been subinfeudated by a tenant-in-chief, the fee reverted temporarily to the crown for a year and a day by right of primer seisin, after which it escheated to the overlord who had granted it to the deceased by enfeoffment. From the time of Henry III, the monarchy took particular interest in escheat as a source of revenue.

At the Norman Conquest of England all the land of England was claimed as the personal possession of William the Conqueror under allodial title. The monarch thus became the owner of all the land in the kingdom, a position which persists to the present day. He then granted estates in land to his favoured followers, who thereby became tenants-in-chief, under various contracts of feudal land tenure. Such tenures, even the highest one of "feudal barony", never conferred ownership of land but merely ownership of certain rights with respect to that land. Such persons are therefore correctly termed "land-holders" or "tenants" (from Latin teneo to hold), not owners. If held freely, that is to say by freehold, such holdings were heritable by the holder's legal heir. On the payment of a premium termed feudal relief to the treasury, the heir was entitled to demand re-enfeoffment by the king with the fee concerned.

Where no legal heir existed, the logic of the situation was that the fief had ceased to exist as a legal entity, since being tenantless no one was living who had been enfeoffed with the land, and the land was thus technically owned by either the crown or the immediate overlord (where the fee had been subinfeudated by the tenant-in-chief to a mesne lord, and perhaps the process of subinfeudation had been continued by a lower series of mesne-lords) as ultimus haeres. Logically therefore it was in the occupation of the crown alone, that is to say in the royal demesne. This was the basic operation of an escheat (excadere), a failure of heirs.

Escheat could also take place if a tenant was outlawed or convicted of a felony, when the King could exercise the ancient right of wasting the criminal's land for a year and a day, and after that the land would return to the lord. By contrast, one guilty of treason (rather than felony) forfeited all lands to the King permanently. John and his heirs frequently insisted on seizing terrae Normannorum, "lands of the Normans", the English land of those who preferred to be Frenchmen rather than Englishmen when the victories of Philip Augustus forced a proclamation of allegiance.) Since disavowal of a feudal bond was considered a felony, lords could escheat land from those who refused to be true to their feudal services. On the other hand, there were tenants who were sluggish in performing their duties, while not being outright rebellious against the lord. Remedies in the courts against this sort of thing, even in Bracton's day, were available, but were considered laborious and frequently ineffectual in compelling the desired performance. The commonest mechanism would be distraint, also called distress (districtio): the lord would seize some chattel, and hold it until performance was achieved. This practice had been dealt with in the 1267 Statute of Marlborough. Even so, it remained the most common extrajudicial method applied by the lords at the time of Quia Emptores.[6]

Thus, under English common law, there were two main ways an escheat could happen:

From the 12th century onward, the Crown appointed escheators to manage escheats and report to the Exchequer, with one escheator per county established by the middle of the 14th century. Upon the death of a tenant-in-chief, the escheator would be instructed by a writ of diem clausit extremum ("he has closed his last day", i.e. he is dead) issued by the king's chancery, to empanel a jury to hold an "inquisition post mortem" to ascertain who the legal heir was, if any, and what was the extent of the land held. Thus it would be revealed whether the king had any rights to the land. It was also important for the king to know who the heir was, and to assess his personal qualities, since he would thenceforth form a constituent part of the royal army, if he held under military tenure. If there was any doubt, the escheator would seize the land and refer the case to the king's court where it would be settled, ensuring that not one day's revenue would be lost. This would be a source of concern with land-holders when there were delays from the court. 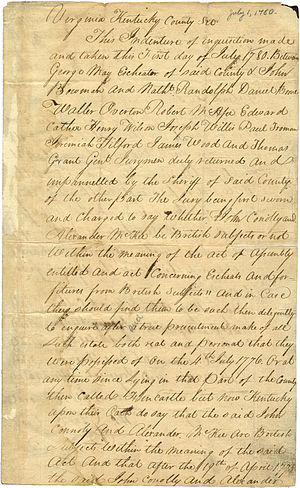 Jury finding from Kentucky County, Virginia County Court from an inquest of escheat. A twelve-man panel adjudged John Connolly and Alexander McKee to be British citizens within the meaning of the Virginia Assembly Act of 1779 concerning British subjects and their rights under Virginia law. (The Assembly had seized Connolly's claims prior to the inquest.) The jury found that the lands of Connolly and McKee were forfeited as they were British (and not American) citizens. Daniel Boone was listed as member of jury. (July 1780)

Most common-law jurisdictions have abolished the concept of feudal land tenure of property, and so the concept of escheat has lost something of its meaning. In England and Wales, the possibility of escheat of a deceased person's property to the feudal overlord was abolished by the Administration of Estates Act 1925; however, the concept of Bona vacantia means that the crown (or Duchy of Cornwall or Duchy of Lancaster) can still receive such property if no-one else can be found who is eligible to inherit it.

The term is often now applied to the transfer of the title to a person's property to the state when the person dies intestate without any other person capable of taking the property as heir. For example, a common-law jurisdiction's intestacy statute might provide that when someone dies without a will, and is not survived by a spouse, descendants, parents, grandparents, descendants of parents, children or grandchildren of grandparents, or great-grandchildren of grandparents, then the person's estate will escheat to the state.

In some jurisdictions, escheat can also occur when an entity, typically a bank, credit union or other financial institution, holds money or property which appears to be unclaimed, for instance due to a lack of activity on the account by way of deposits, withdrawals or any other transactions for a lengthy time in a cash account. In many jurisdictions, if the owner cannot be located, such property can be revocably escheated to the state.

In commerce, it is the process of reassigning legal title in unclaimed or abandoned payroll checks, or stocks and shares whose owners cannot be traced, to a state authority (in the United States). A company is required to file unclaimed property reports with its state annually and, in some jurisdictions, to make a good-faith effort to find the owners of their dormant accounts. The escheating criteria are set by individual state regulations.

Escheat can still occur in England and Wales, if a person is made bankrupt or a corporation is liquidated. Usually this means that all the property held by that person is 'vested in' (transferred to) the Official Receiver or Trustee in Bankruptcy. However, it is open to the Receiver or Trustee to refuse to accept that property by disclaiming it. It is relatively common for a trustee in bankruptcy to disclaim freehold property which may give rise to a liability, for example the common parts of a block of flats owned by the bankrupt would ordinarily pass to the trustee to be realised in order to pay his debts, but the property may give the landlord an obligation to spend money for the benefit of lessees of the flats. The bankruptcy of the original owner means that the freehold is no longer the bankrupt's legal property, and the disclaimer destroys the freehold estate, so that the land ceases to be owned by anyone and effectively escheats to become land held by the Crown in demesne. This situation affects a few hundred properties each year.

Although such escheated property is owned by the Crown, it is not part of the Crown Estate, unless the Crown (through the Crown Estate Commissioners) 'completes' the escheat, by taking steps to exert rights as owner. However, usually, in the example given above, the tenants of the flats, or their mortgagees would exercise their rights given by the Insolvency Act 1986 to have the freehold property transferred to them. This is the main difference between escheat and bona vacantia, as in the latter, a grant takes place automatically, with no need to 'complete' the transaction.

One consequence of the Land Registration Act 1925 was that only estates in land (freehold or leasehold) could be registered. Land held directly by the Crown, known as property in the "royal demesne", is not held under any vestigial feudal tenure (the crown has no historical overlord other than, for brief periods, the papacy) and there is therefore no estate to register. This had the consequence that freeholds which escheated to the Crown ceased to be registrable. This created a slow drain of property out of registration, amounting to some hundreds of freehold titles in each year.

The problem was noted by the Law Commission in their report "Land Registration for the Twenty-First Century". The Land Registration Act 2002 was passed in response to that report. It provides that land held in demesne by the Crown may be registered.

Escheat in the case of deceased estates is currently inoperative by virtue of Section 76 of the Administration Act 1969. However, Section 77 of the same Act provides that where there is no near kin to inherit the estate of someone who dies intestate, the estate passes to the Crown as bona vacantia. When a person becomes bankrupt, that person's property vests in the Assignee appointed to manage the bankrupt's property for the benefit of creditors, but in certain circumstances the Assignee may disclaim the property; if the Assignee does so, ownership interests (including interests in land) are destroyed unless a court order is issued that the property be delivered to or vested in a particular person.