Espoo (Finnish pronunciation: [ˈespoː]; Swedish: Esbo, [ˈɛsbo]) is the second largest city and municipality in Finland. The population of the city of Espoo is 268,924 (30.09.2015).[6] It is part of the Finnish Capital Region, and most of its population lives in the inner urban core of the Helsinki metropolitan area, along with the cities of Helsinki, Vantaa, and Kauniainen. Espoo shares its eastern border with Helsinki and Vantaa, while enclosing Kauniainen. The city is on the shore of the Gulf of Finland, in the region of Uusimaa.

Other bordering municipalities of Espoo are Nurmijärvi and Vihti in the north, and Kirkkonummi in the west. The national park of Nuuksio is situated in northwestern Espoo.

Aalto University is based in Otaniemi, Espoo, along with a thriving science community that includes numerous startups and organizations such as VTT – the Technical Research Center of Finland. Several major companies are based in Espoo, including Nokia Solutions and Networks, Microsoft Mobile, KONE, Neste Oil, Fortum, Orion Corporation, and Outokumpu, as well as video game developers Rovio and Remedy Entertainment.

The city of Espoo is officially bilingual. The majority of the population, 83.6%, speaks Finnish as their mother tongue, while a minority of 8.3% speaks Swedish. 8% of Espoo's population has a first language other than Finnish or Swedish.

The name Espoo probably comes from the Swedish name for the River Espoo, Espå (or Espåå), which in turn comes from the old Swedish word äspe, meaning a border of aspen, and the Swedish word for "river", å, thus "a river bordered by aspen". The name was first mentioned in 1431. The banks of the River Espoo are even today heavily populated with aspen. 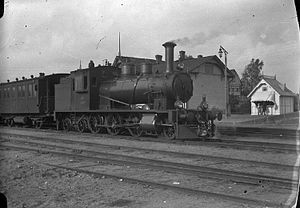 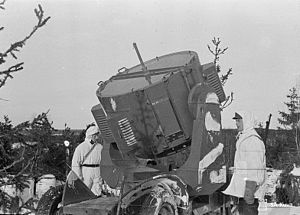 Anti-aircraft searchlight in Haukilahti in 1940

The first inhabitants in the area arrived about 9,000 years ago. Physical evidence (pollen grains) indicates agriculture from ca. 1000 AD, but there are no historical records. Up to the 13th century, the area was a borderland between the hunting grounds of Finnish Proper and Tavastian Finns, with a sparse population. Immigrants from Sweden established permanent agricultural settlements during the 12th and 13th centuries, assimilating the sparse local Finnish-speaking population. Espoo was a subdivision of the Kirkkonummi congregation until 1486-7. The oldest known document referring to Kirkkonummi is from 1330; Espoo as a subchapter has been dated to the 1380s, although the first document directly referring to Espoo is from as late as 1431. The construction of the Espoo Cathedral, the oldest preserved building in Espoo, marks the independence of Espoo. Administratively, Espoo was a part of Uusimaa. When the province was split to Eastern and Western provinces governed from the Porvoo and Raasepori castles, respectively, the eastern border of the Raasepori province was in Espoo. The 13th century road connecting the most important cities in Finland at that time, the King's Road passes through Espoo on its way from Stockholm via Turku and Porvoo to Viipuri.

In 1557, King Gustaf Wasa decided to stabilize and develop the region by founding a royal mansion in Espoo. The government bought the villages of Espåby and Mankby (Finnish: Mankki) and transferred the population elsewhere, and built the royal mansion in Espåby. (Mankby was eventually abandoned and was never repopulated.) The royal mansion housed the king's local plenipotentiary (vogt), and collected royal tax in kind paid by labor on the mansion's farm. The administrative center Espoon keskus has grown around the church and the Espoo railway station, but the municipality has retained a network-like structure of to the modern day.

In 1920, Espoo was only a rural municipality of about 9,000 inhabitants, of whom 70% were Swedish speaking. Agriculture was the primary source of income, with 75% of the population making their living from farming. Kauniainen was separated from Espoo in 1920, and it gained city rights the same year as Espoo, in 1972.

Espoo started to grow rapidly in the 1940s and '50s. It quickly developed from a rural municipality into a fully-fledged industrial city, gaining city rights in 1972. Due to its proximity to Helsinki, Espoo soon became popular amongst people working in the capital. In the fifty years from 1950 to 2000, the population of Espoo grew from 22,000 to 210,000. Since 1945, the majority of people in Espoo have been Finnish speaking. In 2006, the Swedish speaking inhabitants represented barely 9% of the total population. The population growth is still continuing, but at a slower rate. 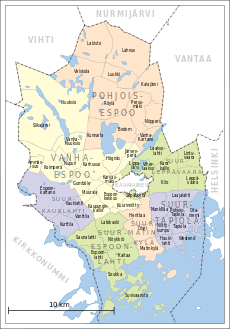 The districts and major areas of Espoo

Espoo is located in southern Finland, along the shore of the Gulf of Finland, and in the region of Uusimaa and the Helsinki sub-region. Prior to the abolition of Finnish provinces in 2009, Espoo was a part of the Southern Finland Province.

The city borders Helsinki, the Finnish capital, which is to the east. Other neighbouring municipalities are Vantaa to the east and northeast, Nurmijärvi to the north, Vihti to the northwest, and Kirkkonummi to the west and southwest. Espoo is a part of the Finnish Capital Region, which is the inner core of the Greater Helsinki metropolitan area.

Although Espoo is relatively highly populated, it has large amounts of natural wilderness, particularly in the city's western and northern portions. The city has a total of 71 lakes, the largest of which are Lake Bodom, Nuuksion Pitkäjärvi, Vanhankylän Pitkäjärvi, Loojärvi, Velskolan Pitkäjärvi, Saarijärvi, Matalajärvi, Siikajärvi, and Lippajärvi. The city has a large coastline on the Gulf of Finland.

The official animal of Espoo is the Siberian flying squirrel, the official bird is the common blackbird, and the official plant is Anemone nemorosa.

Espoo contains many high income suburbs, and six out of the ten highest average income postal code areas in Finland are in Espoo.[citation needed] 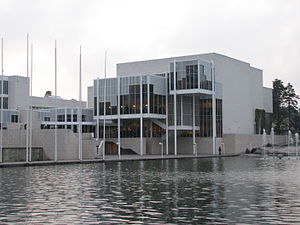 Espoo has several manors two of which are open to the public. The most important is Espoon kartano (Swedish: Esbo gård, Espoo Manor), mentioned first time in 1495, and belonging to the noble Ramsay family since 1756. The current main building dates from 1914, but a mill dates from the 1750s and Finland oldest walved stone bridge from 1777 is on the King's Road (Finnish: Kuninkaantie, Swedish: Kungsvägen) which passes by the manor. The main building can be rented for weddings and similar occasions. Guided tours are available on request for groups. The other manor open to public is Pakankylän kartano, located on the northern shore of Lake Bodom. The manor hosts a restaurant and club rooms, partly with original furniture open to the public, but meant originally to Kaisankoti sanatory and old people's home located on ground of the manor.

The Metal band Children of Bodom comes from Espoo, Finland. They are named after the unsolved murder known as the Lake Bodom murders which took place at Lake Bodom, a lake in northern Espoo, in 1960. The bands Norther and Kiuas also come from Espoo. 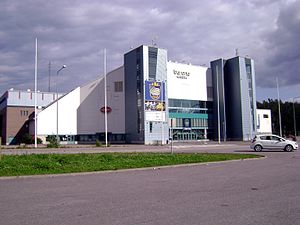 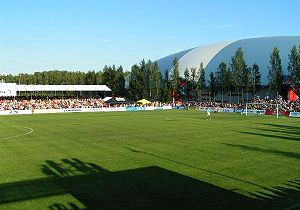 At the 1952 Summer Olympics, the city's Westend Tennis Hall hosted the fencing events.

Espoo is home to several premier league sports teams. The Espoo Blues play at Barona Areena in the SM-liiga – professional ice hockey league. The club was established in February 1984 as "Kiekko-Espoo" and played their first season in 1984–1985 in the Finnish Second Division. In 1988 they achieved a place on the Finnish First Division and in 1992 they celebrated their promotion to the SM-liiga. The club and the team changed their name in 1998. The name came from the dominant colour of their home jersey. The full name of the club is Blues Hockey Oy. The Blues are a contender for the title almost every year, but have yet to win the series. They have come second two times though, most recently in 2011.

FC Honka is a football club that was promoted into the Finnish premier division (Veikkausliiga) for the first time in its history at the end of the 2005 season. Honka now plays in the third tier Kakkonen. They play home matches at Tapiolan urheilupuisto. 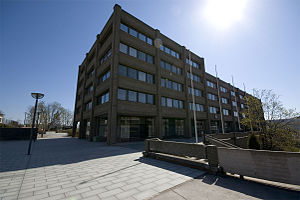 The city hall of Espoo, located in Espoon keskus

Results of the Finnish parliamentary election, 2011 in Espoo: 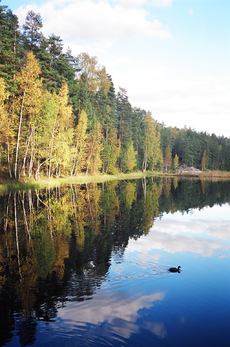 Nuuksio National Park in the autumn

Espoo is twinned with:[9]