From Infogalactic: the planetary knowledge core
Jump to: navigation, search
Not to be confused with Essex County, New Jersey.

Essex County is a county located in the U.S. state of New York. As of the 2010 census, the population was 39,370.[1] Its county seat is Elizabethtown.[2] Its name is from the English county of Essex. Along with Hamilton County, Essex is entirely within the Adirondack Park.

When counties were established in New York State in 1683, the present Essex County was part of Albany County. This was an enormous county, including the northern part of New York State as well as all of the present State of Vermont and, in theory, extending westward to the Pacific Ocean. This county was reduced in size on July 3, 1766, by the creation of Cumberland County, and further on March 16, 1770 by the creation of Gloucester County, both containing territory now in Vermont. On March 12, 1772, what was left of Albany County was split into three parts, one remaining under the name Albany County. One of the other pieces, Charlotte County, contained the eastern portion.

In 1784, the name "Charlotte County" was changed to Washington County to honor George Washington, the American Revolutionary War general and later President of the United States of America.

Essex County was split from Clinton County in 1799.

Essex County is in the northeastern part of New York State, just west of Vermont along the eastern boundary of the State. The eastern boundary of Essex County is Lake Champlain, which serves as the New York – Vermont border at an elevation of just under 100 feet (30.5 m). The highest natural point in New York, Mount Marcy at 5,344 feet (1,629 m), is in the Town of Keene.

The Ausable River forms a partial northern boundary for the county. 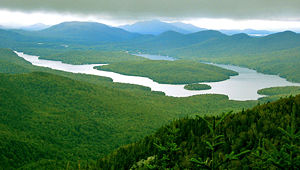 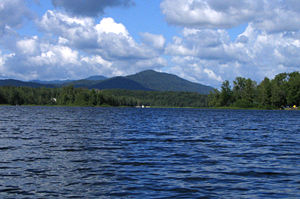 The following public use airports are located in the county:[10]