The Estadio Gran Parque Central, usually just Parque Central, is the stadium of Club Nacional de Football. It is located in Montevideo, Uruguay, near Nacional headquarters (exactly between the streets Carlos Anaya, Jaime Cibils, General Urquiza and Comandante Braga), in the La Blanqueada neighbourhood. In this stadium, Nacional plays most of its home games.

This stadium was one of the venues of the 1930 FIFA World Cup, and it is the grounds in which one the first matches in the history of the FIFA World Cup were played (when in group D the United States defeated Belgium 3-0 on July 13, 1930). This historical fact was remembered by FIFA on two occasions: 1987 and 2005.[5] At the same time, another match was played at the now defunct Estadio Pocitos, between France and Mexico, where the first ever goal on a world cup was scored. The stadium has four main stands: Tribuna José María Delgado (North), Tribuna Atilio García (South), Tribuna Abdón Porte (West), Tribuna Héctor Scarone (East), named after famous Nacional players (like Atilio García, Abdón Porte and Héctor Scarone) and a chairman of the club (José María Delgado).

The Estadio Gran Parque Central is an important landmark in the history of Uruguay, not only because of its relevance in sports, but also for its bonds with the rich history of Uruguayans and their patriotic feelings.

Before the existence of Parque Central as a sports ground, in exactly the same location (which used to be known as "Quinta de la Paraguaya"), Uruguay's national hero José Artigas was named Jefe de los Orientales (leader of the Uruguayan people) in 1811.

The Parque Central was opened for the practice of sports in 1900, having been the site of Montevideo's bullring until the abolition of this activity. At first,the tenants of the stadium were Deutscher Fussball Klub for their home games at the first Uruguayan league championship in the 1900s. As a sports stadium, the Parque Central was inaugurated on March 25, 1900 with a match between the Deutscher Fussball Klub and the CURCC (Central Uruguay Railway Cricket Club). The final score was CURCC 2 - Deutscher 0. Before the game, a lunch was served at Hotel Lanata, among personalities from the Government and leaders of the clubs. According to some chronicles from that period, the inauguration included the Don Bosco Band and the "Flora" gunship Band. There was also a special highlight with a Scottish skirt dancer who took the 7,000 people present by surprise, as they were unaware of the Scottish traditions. Two days after Nacional would meet the Deutscher F. K. in a game that ended 1-1.

The land was the property of "Tranvias a la Union y Maroñas", a German streetcar company whose employees were the founders of the Deutscher F. K. The venue consisted of four tennis courts and two football fields. By 1901,the streetcar company conceded Nacional the second field as they entered the AUF league. From that year until now, the Estadio Gran Parque Central has witnessed several championships won by Nacional (the last one in 2010/2011 season) and Uruguay national football team.

Many parts of the stadium remain unchanged since 1900, like the old "Mirador" located behind the Tribuna Atilio García stand, although the current pitch is different from the one of the beginning of the past century. The current orientation is east-west,opposite to the first one that was north-south,and there was another field in the actual place of the east stands and eastern part of the pitch.

Until 1930, the Parque Central was the main sports venue in Uruguay. It was only with the building of the Estadio Centenario that Nacional's stadium was superseded.

Burnt almost completely after the fire of 1911,it was rebuilt a couple of years later.The second remodelling of the Estadio Gran Parque Central took place in 1944. On that occasion, improvements of the pitch and the four stands were made, and more seats were added in the main stand, Tribuna José María Delgado.

Thirty years later, the Parque Central was remodelled once again due to a fire that destroyed part of the stadium. 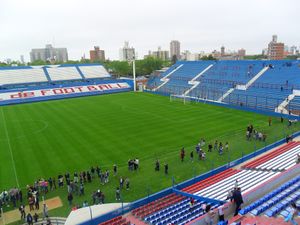 In 2005, through the efforts of Nacional fans and the sale of modern, special seats in the Tribuna José María Delgado stand, the Estadio Gran Parque Central was remodelled once again. The aim of this remodelling was to meet international football standards, which would allow Nacional to play home games for the Uruguayan Championship and the Copa Libertadores at its historic stadium. The present capacity is 27.000, but in following years it is expected to expand to 40.000 (this extension would help in the intention of Nacional to include it as a venue of the future world cup in 2030).

During the 1930 FIFA World Cup, the stadium hosted 6 group matches: