From Infogalactic: the planetary knowledge core
Jump to: navigation, search
This article is about the Greek letter. For other uses, see Eta (disambiguation).

Eta (uppercase Η, lowercase η; Ancient Greek: ἦτα êta or Modern Greek: ήτα íta) is the seventh letter of the Greek alphabet. Originally denoting a consonant /h/, its sound value in the classical Attic dialect of Ancient Greek was a long vowel [ɛː], raised to [i] in medieval Greek, a process known as iotacism.

In the system of Greek numerals it has a value of 8. It was derived from the Phoenician letter heth

. Letters that arose from Eta include the Latin H and the Cyrillic letter И. 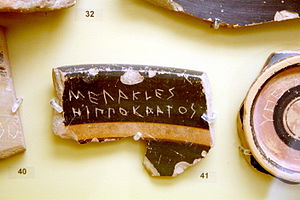 Eta (Heta) in the function of /h/ on the ostrakon of Megacles, son of Hippocrates, 487 BC. Inscription: ΜΕΓΑΚLES HIΠΠΟΚRATOS. On display in the Ancient Agora Museum in Athens, housed in the Stoa of Attalus. 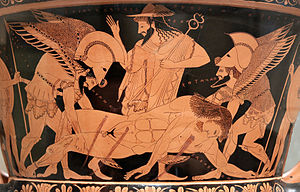 Eta in the function of /h/ on an Attic red-figured calyx-krater, 515 BC. Amongst the depicted figures are Hermes and Hypnos. Inscriptions: HERMES - HYPNOS.
Main article: Heta (letter)

The letter shape 'H' was originally used in most Greek dialects to represent the sound /h/, a voiceless glottal fricative. In this function, it was borrowed in the 8th century BC by the Etruscan and other Old Italic alphabets, which were based on the Euboean form of the Greek alphabet. This also gave rise to the Latin alphabet with its letter H.

Other regional variants of the Greek alphabet (epichoric alphabets), in dialects that still preserved the sound /h/, employed various glyph shapes for consonantal Heta side by side with the new vocalic Eta for some time. In the southern Italian colonies of Heracleia and Tarentum, the letter shape was reduced to a "half-heta" lacking the right vertical stem (Ͱ). From this sign later developed the sign for rough breathing or spiritus asper, which brought back the marking of the /h/ sound into the standardized post-classical (polytonic) orthography.[1] Dionysius Thrax in the second century BC records that the letter name was still pronounced heta (ἥτα), correctly explaining this irregularity by stating "in the old days the letter Η served to stand for the rough breathing, as it still does with the Romans."[2]

In the East Ionic dialect, however, the sound /h/ disappeared by the sixth century BC, and the letter was re-used initially to represent a development of a long vowel /aː/, which later merged in East Ionic with /ɛː/ instead.[3] In 403 BC, Athens took over the Ionian spelling system and with it the vocalic use of H (even though it still also had the /h/ sound itself at that time). This later became the standard orthography in all of Greece.

During the time of post-classical Koiné Greek, the /ɛː/ sound represented by eta was raised and merged with several other formerly distinct vowels, a phenomenon called itacism after the new pronunciation of the letter name as ita instead of eta.

Itacism is continued into Modern Greek, where the letter name is pronounced [ˈita] and represents the sound /i/ (a close front unrounded vowel). It shares this function with several other letters (ι, υ) and digraphs (ει, οι), which are all pronounced alike. This phenomenon at large is called iotacism.

The upper-case letter Η is used as a symbol in textual criticism for the Alexandrian text-type (from Hesychius, its once-supposed editor).

In chemistry, the letter H as symbol of enthalpy sometimes is said to be a Greek eta, but since enthalpy comes from ἐνθάλπος, which begins in a smooth breathing and epsilon, it is more likely a Latin H for 'heat'.

The lower-case letter η is used as a symbol in: