The Etching Revival is the name given by at the time, and by art historians, to the renaissance of etching as an original form of printmaking during a period of time stretching approximately from 1850 to 1930.

During the century after Rembrandt's death the techniques of etching and drypoint brought to their highest point by him gradually declined. By the late eighteenth century, with brilliant exceptions like Piranesi and Tiepolo, most etchings were reproductive or illustrative.

However, in the 1840s and 50's in France, a number of artists did produce some landscape etchings which seemed to recapture some of the spirit of the old master print. Daubigny, Millet and especially Charles Jacque produced etchings that were different from those heavily worked reproductive plates of the previous century.

Three people were of special importance to the French Etching Revival: the publisher Alfred Cadart,[1] the printer Auguste Delatre, and Maxime Lalanne, an etcher who wrote a popular textbook of etching in 1866. Cadart founded the Société des Aquafortistes in 1862, reviving the awareness of the beautiful, original etching in the minds of the collecting public.[1]

"A Treatise on Etching" by Lalanne was translated by S.R. Koehler and published in the United States in 1880. It played a significant role in the Etching Revival in America.

However, before the translation of Lalanne's book, Philip Gilbert Hamerton had become an enthiusiastic promoter of etching in Britain. His "Etching and Etchers" (1868) was more an art history than a technical text but it did much to popularize the art and some of its modern practitioners. The book went through many editions till the 20th century. By the 1870s Hamerton was also publishing an influential periodical, titled "The Portfolio", that published etchings in editions of 1000 copies. 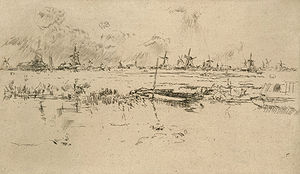 For Hamerton and others, the father of the British Etching Revival was Francis Seymour Haden, the surgeon etcher, who, with his brother-in-law, the American, James Whistler, produced a body of work starting around 1860 that still stands as one the highpoints of etching history. Haden was a collector and authority on the etchings of Rembrandt and it comes as no surprise that as Whistler, the younger man, began to show signs of veering far from the 17th century model, Haden and he parted company.

It was Whistler who convinced the artist Alphonse Legros, one of the members of the French Revival, to come to England as a teacher. This linking of the art of the two countries, though short-lived, did much to validate etching as an art form. Very soon, French etching would show the same modernist signs that French art showed generally, while English and American etching remained true to the kind of technical proficiency and subject matter artists revered in Rembrandt.

Etching as a collected and therefore as a practised art appears to have died with the Great Depression. Without a large group of collectors many artists returned to their canvases. Etchings fell hugely in value until the 1980s when a new market (albeit a small one) began to develop for what is now seen as a small but important tributary of the stream of 19th- and 20th-century art.