Etna is a Denominazione di origine controllata (DOC) for wine from the Etna region in Italy.

Etna D.O.C. territory is closely tied to the biggest active volcano in Europe - Etna. Much of it is covered with crops and natural vegetation. Among the cultivated species the grape vine has always played a major role.[1]

Man appears on the island of Sicily in the Upper Paleolithic (20,000 years B.C.).[2] Evidence exists that ancient grapes are proved to be dated before man ever stepped on the island;[3] however it was only during the Neolithic era when population devoted itself to agriculture and viticulture.

Later on between 1 800 and 500 B.C. the Greeks occupied Sicily. They contributed a lot to the viticulture and the techniques of vinification. Apart from their expertise they introduced new grapes, among which "Grechetto". Its contemporary name is Grecanico and today it can be found in some areas of the Etna region.[2]

Mythology is closely tied to the island as well. The early settlers – the Sicels, who inhabited the island before the Greeks worshipped the God of wine Adranus. The Greeks prayed at Dionysus and the Romans revered the wine God Bacco.[2] Etna volcano and its indigenous wines are often being cited in the Greek mythology as enchanting means for healing, relaxation and amusement. 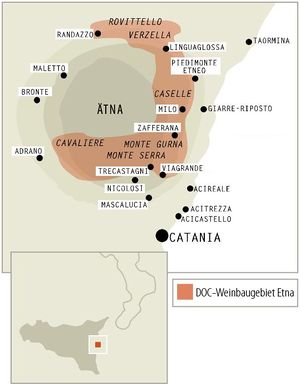 Among its purposes is to establish a method of recognizing the quality wine making and in the same time to enhance the international and national reputation of the product.[3]

In the Etna region there are substantial differences in climate, not only compared to the rest of Sicily, but also from one area of the volcano to another. This is due to the fact that Etna region has semi-circular shape, spread from north to south-west. This characteristic allows for different environments to be formed each with its own microclimate, benefiting from different exposure and different level of proximity to the sea.

Altitude in the Etna region varies between 450m asl and 1100m asl. This factor is the main reason for the temperature amplitudes between day and night and seasonally.

A major difference compared to the rest of Sicily is in the case of precipitation. The highest levels are encountered on the east slopes of the volcano.[2] The rain is practically absent in the summer, can also be very high during the autumn – winter period.

Due to the above differences in the climatic conditions this affects the maturation of the grapes and therefore there is a significant difference between the harvest period of the Etna and the rest of the Sicily areas.[2]

The soil is volcanic and very rich in minerals. It is formed by the disintegration of one or several types of lava of different ages and eruptive materials such as lava, ash and sand. Containing all these particles, the crops cultivated on Etna soil benefit from nutrients like iron, copper, phosphorus, magnesium and others.[2]