From Infogalactic: the planetary knowledge core
Jump to: navigation, search
For the village of Eaton, traditionally in Berkshire, see Eaton, Oxfordshire.

Eton /iːtən/ is a town and civil parish in the ceremonial county of Berkshire, but within the historic boundaries of Buckinghamshire, lying on the opposite bank of the River Thames to Windsor and connected to it by Windsor Bridge. The parish also includes the large village of Eton Wick, two miles west of the town, and has a population of 4,980.[1] Since 1998 it has been part of the unitary authority of Windsor and Maidenhead.

The town is best known as the location of Eton College, a famous public school.

The land that is now Eton once belonged to the manor of Queen Edith, wife of Edward the Confessor. The land was appropriated by the Normans after 1066. The main road between Windsor and London went through the area and a hamlet sprang up amid pasture meadows to maintain the road and the bridge.

In 1440, Henry VI chose Eton as the location for his new college, Eton College. Workmen were moved into Eton to build the college. All of the land immediately around the hamlet was granted to the college, which stopped further growth. The new college chapel made the village a pilgrimage point, and inns were set up along the high street. Henry VI gave the college the right to hold fairs on its grounds.[2]

During the English Civil War, after Windsor Castle was captured by parliamentarian forces, the Royalist army moved into Eton and attempted to retake the town, occupying the college. Efforts to retake Windsor were unsuccessful and the royalists eventually fled.[3]

The college sometimes leased small plots of land to the village as an act of charity, leading to the construction of houses near the bridge. Scholars at the college also used to collect "salt" (money) from the inns of Eton High Street.[4] This practice continued until 1845 when a scholar refused to associate with the inns because they were a "temptation" to Eton students.[5] Eton was favourably[clarification needed] modernised and was the first village in the UK to have its own post office and modern drainage system.[6]

By 1925 the town was described as more commercial than residential, with most of the buildings (apart from those of the school itself) belonging to businesses serving the schoolboys.[7]

In about 1970, the bridge connecting Eton to Windsor was closed to all motor traffic. 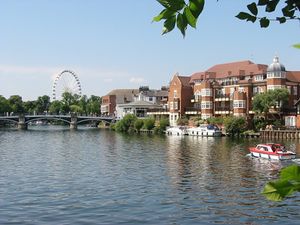 View of Eton looking across the River Thames from Windsor

On Borough level, the town is part of the Eton and Castle electoral ward and is currently represented by one councillor (George Fussey of the Liberal Democrats) in the Royal Borough of Windsor and Maidenhead.[8]

Nationally, since 1997 the ward has formed part of the UK Parliamentary constituency of Windsor and is currently represented by Adam Afriyie of the Conservative Party.

Between 1983 and 1997, the town was part of the UK Parliamentary constituency of Windsor and Maidenhead which was continuously held by the Conservative Party during this period.

Before 1983, the town was within the boundaries of the UK Parliamentary constituency of Eton and Slough. This was consistently held by the Labour Party from its creation in 1945 to its redistribution in 1983, except between 1964 and 1966 when it was held by a Conservative.

Eighty metres southeast of the town's historic pedestrian and cycle bridge is Windsor and Eton Riverside railway station. The town's other station, Windsor and Eton Central railway station, is 200 m to the southwest. The destinations are London Waterloo and London Paddington respectively. The Central Station offers the "change-at-Slough" service to London, taking between 41 and 56 minutes, compared to a no-change-required 56–78 minutes for the Riverside Station.[10]