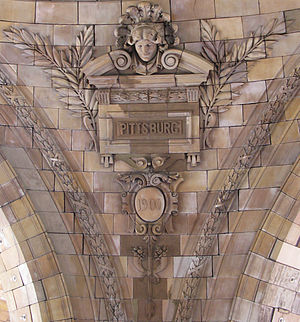 Inside of the rotunda of Union Station in Pittsburgh showing the spelling as it was in 1900.

The name of the city of Pittsburgh, Pennsylvania, has a complicated history. Pittsburgh is one of the few U.S. cities or towns to be spelled with an h at the end of a burg suffix.

The suffix burgh is the Scots language and Scottish English cognate of the English language borough, which has other cognates in words and place names in several Indo-European languages. Historically, this morpheme was used in place names to describe a location as being defensible, such as a hill, a fort, or a fortified settlement.[1][note 1] 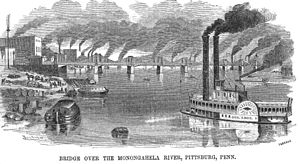 Pittsburgh (originally Fort Duquesne) was captured by British forces during the Seven Years War. The earliest known reference to the new name of the settlement is in a letter sent from General John Forbes to William Pitt the Elder, dated 27 November 1758, notifying Pitt that his name had been given to the place. In that letter, the spelling is given as "Pittsbourgh."[2][3] As a Scotsman, General Forbes probably pronounced the name /ˈpɪtsbᵊrə/ (PITS-brə or PITS-bə-rə), similar to the pronunciation of "Edinburgh" as a Scotsman would say it:

The first recorded reference using the current spelling is found on a survey map made for the Penn family in 1769.[citation needed] In the city charter, granted on March 18, 1816, the Pittsburgh spelling is used on the original document, but due to an apparent printing error, the Pittsburg spelling is found on official copies of the document printed at the time.[2] Even before the name of the city was temporarily changed to Pittsburg in 1897, that spelling variant was well-attested. For example, the image to the right—published in 1857—is captioned "Bridge over the Monongahela River, Pittsburg, Penn." 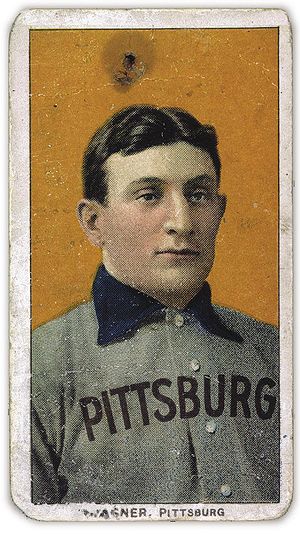 The city's name is commonly misspelled as Pittsburg because innumerable cities and towns in America make use of the German -burg suffix, while very few make use of the Scottish -burgh suffix. This problem is compounded by the fact that from 1891 to 1911, the official spelling of the city's name was temporarily changed to Pittsburg.

Official elimination and restoration of the 'h'

In 1891 the United States Board on Geographic Names adopted thirteen general principles to be used in standardizing place names, one of which was that place names ending in -burgh should drop the final -h.[7] The Board compiled a report of place name "decisions", also in 1891, in which the city's name was rendered Pittsburg.[8][note 2]

The Board's primary concern in revising the spelling of Pittsburgh was to ensure that all municipality names ending in -burgh be standardized to end in -burg. However, the Board also supported its decision to rename Pittsburgh by referencing the printed copies of the 1816 city charter which featured the spelling Pittsburg rather than Pittsburgh. Based on those copies of the city charter, the Board claimed that the official name of the city had always been Pittsburg. However, the members of the board seem to have been unaware that the original copy of the 1816 charter specified the name of the city to be Pittsburgh, and that only the printed copies of the charter featured the erroneous spelling Pittsburg. The full decision and rationale from the Board follows:

The Board's decisions had limited but effective power; they were compulsory upon all federal government agencies, including the Post Office. The new official spelling was resisted by many people in the city. The Pittsburgh Gazette refused to adopt the Board's decision, as did the Pittsburgh Stock Exchange and the University of Pittsburgh.[8] Official city documents continued to use the old spelling.[2] Responding to mounting pressure and, in the end, political pressure from senator George T. Oliver,[8] the United States Geographic Board (a successor to the original United States Board on Geographic Names) reversed the decision on July 19, 1911, and the Pittsburgh spelling was restored.[2] The letter sent to senator Oliver to announce this decision, dated July 20, stated:

Sir: At a special meeting of the United States Geographic Board held on July 19, 1911, the previous decision with regard to the spelling of Pittsburgh without a final H was reconsidered and the form given below was adopted:

Pittsburgh, a city in Pennsylvania (not Pittsburg).

Perhaps the most familiar reference to the Pittsburg spelling is on the renowned 1909 T-206 baseball card of Pittsburgh Pirates legend Honus Wagner, printed two years before the spelling of the city was reverted to Pittsburgh. Its scarcity, even at the time, combined with Wagner's reputation as one of the greatest players in baseball history, made it the most valuable sports card of all time, with one pristine specimen yielding $2.8 million at auction.[11] It has been characterized as the "Holy Grail" of baseball cards.[12] The Pirates' uniforms of the time displayed "PITTSBURG" across the chest. The portrait of Wagner makes it appear as if there could be an H on the end, cut off by the border of the picture, but the caption beneath it is "WAGNER, PITTSBURG", confirming that the omission of the H was intentional.

The '-h' in Pittsburgh culture

The presence of the -h at the end of the word Pittsburgh is occasionally recognized in Pittsburgh culture. It is often rendered as PGH. For example, Pittsburgh International Airport's abbreviation is PIT, while Union Station's abbreviation is PGH. (This is ironic considering that Union Station opened in 1903, when the official spelling of the city was just Pittsburg, lacking the -h.) A recent playful take on the final -h of Pittsburgh appears in the name of the Pittsburgh Water and Sewer Authority's brand of bottled water: PGH2O, which is a portmanteau of the abbreviation PGH and the chemical name for water, H2O.[13]