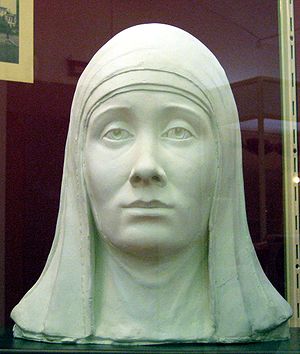 Eudoxia was a daughter of Dmitry Konstantinovich, Grand Prince of Nizhny Novgorod and Vasilisa of Rostov.

Her maternal grandparents were Konstantin Vasilievich, Prince of Rostov and Maria of Moscow.

Maria was a daughter of Ivan I of Moscow and his first wife Yelena.

On 18 January 1367, Eudoxia married Grand Prince Dmitry Donskoy. In 1382, she stayed in Moscow in the absence of her husband, while the army of khan Tokhtamysh was approaching the capital. After the birth of her son Andrey Dmitriyevich, she attempted to leave Moscow, but was detained by the Muscovites, who agreed to let her go only after long negotiations. 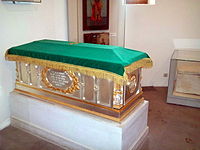 Shrine (Raka) of Eudoxia of Moscow

After her husband's death, Eudoxia became known for her piety; legend has it that she possessed the gift of healing. In 1393, she founded the Church of the Nativity of the Theotokos (Церковь Рождества Богородицы), the oldest surviving building in Moscow. The church was dedicated to the Virgin's Nativity, because on this feast her husband defeated the Tatars in the Battle of Kulikovo.

Eudoxia and Dmitri Donskoi had at least 12 children:

On 15 August 2007, the Holy Synod of the Russian Orthodox Church instituted the Order of St. Euphrosyne, named after Eudoxia, who was the first noblewoman of Moscow to enter monasticism. The award was established to commemorate the 600th anniversary of Euphrosyne's death. According to the synod's ukase (decree), the new decoration will be given to women for special contributions towards the strengthening of spiritual and moral traditions in society, development of the church's social activities, maintaining relations between church and state or church and society, and other fields of work for the betterment of the Orthodox faith. The Order of St. Euphrosyne will be the second women's decoration of the Russian Orthodox Church after the Order of Saint Catherine.[1]