Eugene Andrew "Gene" Cernan (/ˈsər.nən/; born March 14, 1934), (CAPT, USN, Ret.), is a retired American naval officer and Naval Aviator, electrical engineer, aeronautical engineer, fighter pilot, and NASA astronaut. He launched into space three times: as Pilot of Gemini 9A in June 1966, as Lunar Module Pilot of Apollo 10 in May 1969, and as Commander of Apollo 17 in December 1972, the final Apollo lunar landing.

On Apollo 17, Cernan became the eleventh person to walk on the Moon and the last man on the Moon since he was the last to re-enter the Lunar Module Challenger after the mission's third and final extravehicular activity (EVA). (Crewmate Harrison Schmitt was the last man to arrive on the Moon, as Cernan left the module first.) Cernan was also a backup crew member for the Gemini 12, Apollo 7 and Apollo 14 space missions.

Born on March 14, 1934, in Chicago, Illinois, son of a Slovak father and a Czech mother, Cernan grew up in the suburban towns of Bellwood and Maywood. Graduating from Proviso East High School in Maywood, class of 1952, he entered Purdue University, where he became a member of Phi Gamma Delta fraternity. He received a Bachelor of Science degree in Electrical Engineering in 1956, and was commissioned as a U.S. Navy Ensign through the Naval Reserve Officers Training Corps at Purdue. He became a Naval Aviator flying FJ-4 Fury then A-4 Skyhawk jets in the attack role.[1] He received a Master of Science degree in Aeronautical Engineering from the U.S. Naval Postgraduate School in 1963.

Cernan was a Boy Scout and earned the rank of Second Class.[2] His hobbies include love for horses, sports, hunting, fishing, and flying.

He has logged more than 5,000 hours flying time, with more than 4,800 hours in jet aircraft, and over 200 jet aircraft carrier landings.

Cernan was selected among the third group of NASA astronauts in October 1963 by NASA to participate in projects Gemini and Apollo.

Cernan was originally selected as backup pilot for Gemini 9 with Thomas Stafford. When the prime crew was killed in the crash of NASA T-38A "901" (USAF serial 63-8181) at Lambert Field on February 28, 1966, the backup crew became the prime crew. Gemini 9A encountered a number of problems; the original target vehicle exploded during launch, and the planned docking with a substitute target vehicle was made impossible by a protective shroud failing to separate after launch. However, the crew performed a rendezvous that simulated procedures that would be used in Apollo 10: the first optical rendezvous; and a lunar orbit abort rendezvous. Cernan performed the second American EVA (the third ever), but overexertion due to lack of limb restraints prevented testing of the AMU and forced the early termination of the spacewalk. 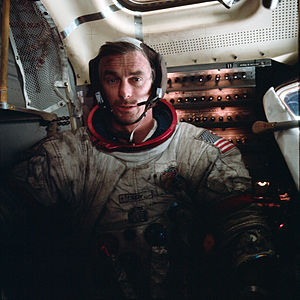 Cernan in the LM after EVA 3 on Apollo 17 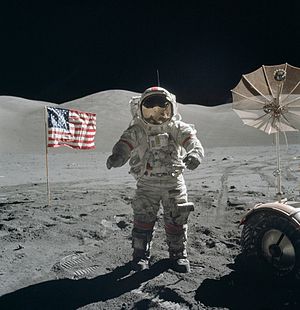 Cernan at the beginning of EVA 3

Cernan is one of only three humans to travel to the Moon on two different occasions (the others being Jim Lovell and John Young), one of only twelve people to walk on the Moon and the only person to have descended toward the Moon in the lunar lander twice (the first was Apollo 10's non-landing mission). Apollo 10 holds the world/moon record for the highest speed attained by any manned vehicle at 39,897 km/h (11.083 km/s or 24,791 mph) during its return from the Moon on May 26, 1969.

Cernan turned down the opportunity to walk on the Moon as Lunar Module Pilot of Apollo 16, preferring to risk missing a flight altogether for the opportunity to command his own mission.[3] He was publicly critical[when?] of the decision by NASA to send a scientist—Schmitt—to the Moon, a decision that meant that original Lunar Module Pilot, Joe Engle, never got to walk on the Moon. However, in Cernan's words, Schmitt proved a capable LM pilot.[citation needed]

Eight months later Cernan was selected as Commander of Apollo 17, the final lunar landing. While on the Moon in December 1972 during Apollo 17, he and his crewmate Harrison Schmitt performed three EVAs for a total of about 22 hours of exploration of Taurus–Littrow valley. Their first EVA alone was more than three times the length Neil Armstrong and Buzz Aldrin spent outside the LM on Apollo 11. During this time they covered more than 35 km (22 mi) using the Lunar Rover and spent a great deal of time collecting geologic samples that would shed light on the Moon's early history. Cernan piloted the rover on its final sortie, recording a maximum speed of 11.2 mph (18.0 km/h), giving him the (unofficial) lunar land speed record.[4]

As Cernan prepared to climb the ladder for the final time, he spoke these words, currently the last spoken by a human standing on the Moon's surface: "Bob, this is Gene, and I'm on the surface; and, as I take man's last step from the surface, back home for some time to come – but we believe not too long into the future – I'd like to just (say) what I believe history will record. That America's challenge of today has forged man's destiny of tomorrow. And, as we leave the Moon at Taurus–Littrow, we leave as we came and, God willing, as we shall return, with peace and hope for all mankind. Godspeed the crew of Apollo 17."[5]

On July 2, 1974 Cernan was a roaster of Don Rickles on The Dean Martin Celebrity Roast. At the end of the roast, Rickles (who attended the Apollo 17 launch) paid tribute to Cernan as a "delightful, wonderful, great hero."

In 1976, Cernan retired from both the Navy (with the rank of captain) and from NASA, and went into private business.

In 1999 he published his memoir The Last Man on the Moon with coauthor Donald A. Davis, covering his naval and NASA career. He has been featured in space exploration documentaries, such as In the Shadow of the Moon, in which he stated: "Truth needs no defense" and "Nobody can take those footsteps I made on the surface of the moon away from me."[6] Cernan also contributed to the book of the same name.

Cernan was a contributor to ABC News and its Good Morning America morning show.[when?]

On May 13, 2010, Cernan and Neil Armstrong testified before U.S. Congress in opposition to President Barack Obama's cancellation of the Constellation program, initiated during the Bush administration as part of the Vision for Space Exploration to return humans to the Moon and later to Mars, but later deemed underfunded and unsustainable by the Augustine Commission in 2009.

Cernan was featured in the Discovery Channel's documentary miniseries When We Left Earth: The NASA Missions, providing narrative on his involvement and missions as an astronaut. In the 1998 Primetime Emmy Award-winning HBO miniseries From the Earth to the Moon, he was portrayed by Daniel Hugh Kelly.

His recollections were the basis of the song "Moon Rider", written by Paul and Ralph Colwell and Herbert Allen, performed by Up With People.

In December 2011 Cernan appeared on the BBC's astronomy program The Sky at Night in the episode entitled "Last Man on the Moon". He appeared on another BBC program in 2012, answering questions on Stargazing Live by video link from Houston.

Cernan's story of leaving the initials of his daughter, Tracy, written on a rock on the Moon, was prominently mentioned in the 20th episode of the third season of Modern Family. The story, and Cernan's relationship with his daughter in general, was later adapted into "Tracy's Song" by pop-rock band No More Kings.

A number of fictional characters have been described as being the "last man to walk on the moon." These have included Steve Austin of the novel Cyborg by Martin Caidin (later adapted as the TV series The Six Million Dollar Man with Lee Majors portraying the character) and Captain Spurgeon Tanner, a character in the film Deep Impact portrayed by Robert Duvall.

In Magnificent Desolation: Walking on the Moon 3D, Cernan is voiced by Gary Sinise.

Cernan's voice from the Apollo 17 mission was sampled by Daft Punk for the duo's 2013 album Random Access Memories, in the last track named "Contact".[8]

Cernan's last words on the lunar surface, along with Lunar Module Pilot Harrison Schmidt's recollections, were used by the band Public Service Broadcasting for the song Tomorrow, the final track of their 2015 album The Race for Space. [9]

Cernan's name is used as the name of a Twain Ship (air ship capable of traversing parallel worlds) in "The Long Mars" (2014), a Science-Fiction/Fantasy novel by Sir Terry Pratchett and Stephen Baxter.