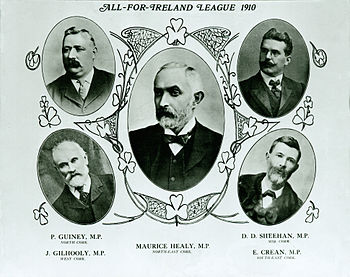 Eugene Crean (1854–1939) was an Irish nationalist politician and MP in the House of Commons of the United Kingdom of Great Britain and Ireland and member of the Irish Parliamentary Party 1892–1910, for the All-for Ireland Party 1910–1918.

He was born at No:3 Douglas Street, Cork (the house is still standing) son of Daniel Crean, brothers Patrick and Daniel, sisters Hanora, Margaret and Anne.Married to Hannah FitzGerald, they had six children: Daniel, Nell, Norah. May, Kay and Tom. A carpenter by trade, he was involved in the trade union movement in Cork city and as a representative of the Carpenters’ Society, was elected president of the Cork United Trades Workers Association. He was elected in 1886 to the Cork City Council, and was President of the Cork Trade Council in 1886 until deposed in 1890 for his opposition to Parnell in the split. He was President of the Cork County Board 1890/91.

In the 1892 general election he was chosen on the recommendation of Michael Davitt, who continued to advocate for a place for labour within the nationalist movement, as candidate for the anti-Parnellite Irish National Federation and was elected "Labour Nationalist" MP for Queen's County (Ossory Division).[1] He retained his seat 1895–1900. Then at the suggestion of Davitt sat for south-east Cork from 1900 as a member of the re-united Irish Parliamentary Party, after defeating the Healyite candidate, and was again returned in 1906. He was the last bearer of the title "Mayor of Cork" when elected in 1899, which was changed to Lord Mayor of Cork in 1900.

One of William O'Brien's closest allies, he joined with him from 1910 and was elected as an All-for-Ireland Party (AFIL) MP in both elections that year, retaining his seat until the December 1918 election when he stood down together with the other members of the AFIL party. In the previous June, when Arthur Griffith asked O’Brien to have the writ moved for his candidacy in the Cavan-east by-election, O'Brien sent two AFIL MPs to Westminster where Crean moved the writ. Griffith was subsequently elected with a sizable majority.[2]

Crean was a patron of the Gaelic Athletic Association in its early years and although a Member of Parliament for 26 years, he died in relative obscurity at his Douglas Street, Cork residence on 12 January 1939.