Born in Turner, Maine, he was educated in local schools and at Maine's Hebron Academy. He was admitted to the bar in 1857 and served for nine years as prosecuting attorney for Hancock County, Maine. He was elected to the Maine Legislature 1867–68, to the U.S. House of Representatives 1869–79, serving in the 41st and four succeeding Congresses. He was an unsuccessful candidate for reelection in 1878 to the 46th Congress. 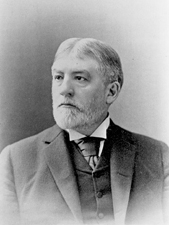 Although he declined the post of United States Secretary of the Navy in the Rutherford B. Hayes administration (and had previously declined a Cabinet appointment under Ulysses S. Grant), Senator Hale performed constructive work of the greatest importance in the area of naval appropriations, especially during the early fights for the "new Navy." "I hope", he said in 1884, "that I shall not live many years before I shall see the American Navy what it ought to be, the pet of the American people." Much later in his career, he opposed the building of large numbers of capital ships, which he regarded as less effective in proportion to cost and subject to rapid obsolescence.

He was served as a member of the National Monetary Commission. Hale received an LL.D. from Bates College in 1882.

During the late 1890s, Hale and Senator George F. Hoar of Massachusetts were the most vocal opponents of American intervention into the ongoing insurrection in Cuba. Hale disdained expansionism and jingoism and often challenged claims made by senators on Cuban military victories and Spanish atrocities. He so frequently engaged in verbal jousts with Cuban sympathizers in the Senate that they unfairly accused him of parroting Spanish propaganda and called him "The Senator from Spain."

Senator Hale retired from politics in 1911 and spent the remainder of his life in Ellsworth, Maine, and in Washington, D.C., where he died. He is buried at in Woodbine Cemetery, Ellsworth, Maine.

Two ships were named USS Hale for him. He was the father of Frederick Hale, also a U.S. Senator from Maine, and of diplomat Chandler Hale.

Gertrude Atherton's novel Senator North (1900) was based on Eugene Hale.[1]