Eugene Morrison Stoner (November 22, 1922 — April 24, 1997) was an American firearms designer who is most associated with the development of the AR-15 rifle that was adopted by the US military as the M16. He is regarded by some historians as one of the most successful firearms designers of the 20th century.

Stoner attended high school in Long Beach and upon graduating worked for the Vega Aircraft Company installing armament. During World War II, he enlisted for Aviation Ordnance in the U.S. Marine Corps and served in the South Pacific and northern China.[1]

In late 1945 Stoner began working in the machine shop for Whittaker, an aircraft equipment company, and ultimately became a Design Engineer. In 1954 he came to work as chief engineer for ArmaLite, a division of Fairchild Engine & Airplane Corporation. While at ArmaLite, he designed a series of prototype small arms, including the AR-3, AR-9, AR-11, AR-12, none of which saw significant production. Their only real success during this period was the AR-5 survival rifle, which was adopted by the United States Air Force.[1]

In 1955, Stoner completed initial design work on the revolutionary AR-10, a lightweight (7.25 lbs.) selective-fire infantry rifle in 7.62×51mm NATO caliber. The AR-10 was submitted for rifle evaluation trials to the US Army’s Aberdeen Proving Ground late in 1956. In comparison with competing rifle designs previously submitted for evaluation, the AR-10 was smaller, easier to fire in automatic, and much lighter. However it arrived very late in the testing cycle, and the army rejected the AR-10 in favor of the more conventional T44, which would become the M14. The AR-10's design was later licensed to the Dutch firm of Artillerie Inrichtingen, who produced the AR-10 until 1960 for sale to various foreign military forces.[2] 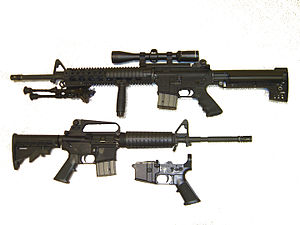 At the request of the U.S. military, Stoner's chief assistant, Robert Fremont and Jim Sullivan designed the AR-15 from the basic AR-10 model, scaling it down to fire the small-caliber .223 Remington cartridge, slightly enlarged to meet the minimum Army penetration requirements. The AR-15 was later adopted by United States military forces as the M16 rifle.[2][3]

After ArmaLite sold the rights to the AR-15 to Colt, Stoner turned his attention to the AR-16 design. This was another advanced 7.62 mm rifle but used a more conventional piston and a number of stamped parts to reduce cost. This weapon saw only prototype development but adaptation to .223 resulted in the somewhat successful and often imitated Armalite AR-18.[2]

Stoner left ArmaLite in 1961 to serve as a consultant for Colt. He eventually accepted a position with Cadillac Gage where he designed the Stoner 63 Weapons System.[2] This was a modular weapons system that could be reconfigured to be a standard automatic rifle, a light machine gun, a medium machine gun, or a solenoid-fired fixed machine gun. The Stoner Weapons System used a piston-operated gas impingement system, though Stoner himself believed direct gas operation was the ideal method for firearms. Once again, Robert Fremont and Jim Sullivan would take a Stoner rifle and redesign it for the .223 Remington cartridge, to create the Stoner 63 Weapons System.[4]

Stoner worked for TRW by designing the TRW 6425 25 mm Bushmaster auto cannon, which was later manufactured by Oerlikon as the KBA.[1]

He co-founded ARES Incorporated of Port Clinton, Ohio, in 1972, but left the company in 1989, after designing the Ares Light Machine Gun, sometimes known as the Stoner 86. It was an evolved version of the Stoner 63. At Ares, he also designed the Future Assault Rifle Concept (FARC).[1]

In 1990, he joined Knight's Armament Company (KAC) to create the Stoner Rifle-25 (SR-25), which currently sees military service as the United States Navy Mark 11 Mod 0 Sniper Weapon System. While at KAC, he also worked on yet another version of the Stoner Weapons System, called the Stoner 96. Among his last designs were the SR-50 rifle and the Colt 2000.[5]