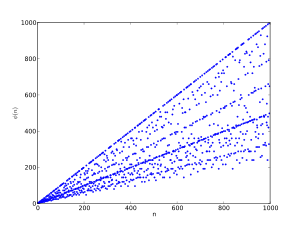 The first thousand values of φ(n)

In number theory, Euler's totient function (or Euler's phi function), denoted as φ(n) or ϕ(n), is an arithmetic function that counts the positive integers less than or equal to n that are relatively prime to n. (These integers are sometimes referred to as totatives of n.) Thus, if n is a positive integer, then φ(n) is the number of integers k in the range 1 ≤ k ≤ n for which the greatest common divisor gcd(n, k) = 1.[1][2]

Euler's totient function is a multiplicative function, meaning that if two numbers m and n are coprime, then φ(mn) = φ(m) φ(n).[3][4]

Euler's phi function is important mainly because it gives the order of the multiplicative group of integers modulo n (the group of units of the ring ℤ/nℤ).[5] It also plays a key role in the definition of the RSA encryption system.

Leonhard Euler introduced the function in 1763.[6][7][8] However, he did not at that time choose any specific symbol to denote it. In a 1784 publication, Euler studied the function further, choosing the Greek letter π to denote it: he wrote πD for "the multitude of numbers less than D, and which have no common divisor with it".[9] The standard notation[7][10] φ(A) comes from Gauss's 1801 treatise Disquisitiones Arithmeticae.[11] However, Gauss didn't use parentheses around the argument and wrote φA. Thus, it is often called Euler's phi function or simply the phi function.

The cototient of n is defined as n – φ(n), i.e. the number of positive integers less than or equal to n that are divisible by at least one prime that also divides n.

There are several formulas for computing φ(n).

where the product is over the distinct prime numbers dividing n. (The notation is described in the article Arithmetical function.)

1) The function φ(n) is multiplicative

The fundamental theorem of arithmetic states that if n > 1 there is a unique expression for n,

This is Euler's product formula.

The totient is the discrete Fourier transform of the gcd, evaluated at 1:[14] Let

The real part of this formula is

Note that unlike the other two formulae (the Euler product and the divisor sum) this one does not require knowing the factors of n. However, it does involve the calculation of the greatest common divisor of n and every positive integer less than n, which suffices to provide the factorization anyway.

The property established by Gauss,[15] that

where the sum is over all positive divisors d of n, can be proven in several ways. (see Arithmetical function for notational conventions.)

One way is to note that φ(d) is also equal to the number of possible generators of the cyclic group Cd; specifically, if Cd = <g>, then gk is a generator for every k coprime to d. Since every element of Cn generates a cyclic subgroup, and all subgroups of Cd ≤ Cn are generated by some element of Cn, the formula follows.[16] In the article Root of unity Euler's formula is derived by using this argument in the special case of the multiplicative group of the nth roots of unity.

This formula can also be derived in a more concrete manner.[17] Let n = 20 and consider the fractions between 0 and 1 with denominator 20:

First note that all the divisors of 20 are denominators. And second, note that there are 20 fractions. Which fractions have 20 as denominator? The ones whose numerators are relatively prime to 20

By definition this is φ(20) fractions. Similarly, there are φ(10) = 4 fractions with denominator 10

In detail, we're considering the fractions of the form k/n where k is an integer from 1 to n inclusive. Upon reducing these to lowest terms, each fraction will have as its denominator some divisor of n. We can group the fractions together by denominator, and we must show that for a given divisor d of n, the number of such fractions with denominator d is φ(d).

Note that to reduce k/n to lowest terms, we divide the numerator and denominator by gcd(k, n). The reduced fractions with denominator d are therefore precisely the ones originally of the form k/n in which gcd(k, n)=n/d. The question therefore becomes: how many k are there less than or equal to n which verify gcd(k, n)=n/d? Any such k must clearly be a multiple of n/d, but it must also be coprime to d (if it had any common divisor s with d, then sn/d would be a larger common divisor of n and k). Conversely, any multiple k of n/d which is coprime to d will satisfy gcd(n, k)=n/d. We can generate φ(d) such numbers by taking the numbers less than d coprime to d and multiplying each one by n/d (these products will of course each by smaller than n, as required). This in fact generates all such numbers, as if k is a multiple of n/d coprime to d (and less than n), then k/(n/d) will still be coprime to d, and must also be smaller than d, else k would be larger than n. Thus there are precisely φ(d) values of k less than or equal to n such that gcd(k, n)=n/d, which was to be demonstrated.

where μ is the Möbius function.

the Euler totient function can be calculated as a limit involving the Riemann zeta function:[citation needed]

is the Riemann zeta function,

is the Möbius function,

is e (mathematical constant), and

Some values of the function 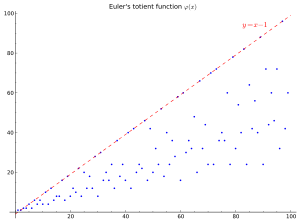 Graph of the first 100 values

The top line in the graph, y = n − 1, is a true upper bound. It is attained whenever n is prime. There is no lower bound that is a straight line of positive slope; no matter how gentle the slope of a line is, there will eventually be points of the plot below the line. More precisely, the lower limit of the graph is proportional to n/log log n rather than being linear.[19]

This states that if a and n are relatively prime then

The special case where n is prime is known as Fermat's little theorem.

This follows from Lagrange's theorem and the fact that φ(n) is the order of the multiplicative group of integers modulo n.

The RSA cryptosystem is based on this theorem: it implies that the inverse of the function

is the (public) encryption exponent, is the function

, the (private) decryption exponent, is the multiplicative inverse of

. The difficulty of computing

without knowing the factorization of

is thus the difficulty of computing

: this is known as the RSA problem which can be solved by factoring

. The owner of the private key knows the factorization, since an RSA private key is constructed by choosing

as the product of two (randomly chosen) large primes

is publicly disclosed, and given the difficulty to factor large numbers we have the guarantee that no-one else knows the factorization.

Compare this to the formula

(here γ is the Euler constant).

Schneider[26] found a pair of identities connecting the totient function, the golden ratio and the Möbius function

is the totient function, and

is the golden ratio.

The proof is based on the formulae

The Dirichlet series for φ(n) may be written in terms of the Riemann zeta function as:[27]

The Lambert series generating function is[28]

Both of these are proved by elementary series manipulations and the formulae for φ(n).

Growth of the function

These two formulae can be proved by using little more than the formulae for φ(n) and the divisor sum function σ(n).

In fact, during the proof of the second formula, the inequality

Proving this doesn't quite require the prime number theorem.[32][33] Since log log (n) goes to infinity, this formula shows that

for infinitely many n.

The second inequality was shown by Jean-Louis Nicolas. Ribenboim says "The method of proof is interesting, in that the inequality is shown first under the assumption that the Riemann hypothesis is true, secondly under the contrary assumption."[35]

due to Arnold Walfisz, its proof exploiting estimates on exponential sums due to I. M. Vinogradov and N.M. Korobov (this is currently the best known estimate of this type). The "Big O" stands for a quantity that is bounded by a constant times the function of "n" inside the parentheses (which is small compared to n2).

In 1954 Schinzel and Sierpiński strengthened this, proving[38][39] that the set

is dense in the positive real numbers. They also proved[38] that the set

A totient number is a value of Euler's totient function: that is, an m for which there is at least one n for which φ(n) = m. The valency or multiplicity of a totient number m is the number of solutions to this equation.[40] A nontotient is a natural number which is not a totient number: there are infinitely many nontotients,[41] and indeed every odd number has an even multiple which is a nontotient.[42][clarification needed]

If counted accordingly to multiplicity, the number of totient numbers up to a given limit x is

where the error term R is of order at most

Ford (1999) proved that for every integer k ≥ 2 there is a totient number m of multiplicity k: that is, for which the equation φ(n) = m has exactly k solutions; this result had previously been conjectured by Wacław Sierpiński,[47] and it had been obtained as a consequence of Schinzel's hypothesis H.[43] Indeed, each multiplicity that occurs, does so infinitely often.[43][46]

However, no number m is known with multiplicity k = 1. Carmichael's totient function conjecture is the statement that there is no such m.[48]

In the last section of the Disquisitiones[49][50] Gauss proves[51] that a regular n-gon can be constructed with straightedge and compass if φ(n) is a power of 2. If n is a power of an odd prime number the formula for the totient says its totient can be a power of two only if a) n is a first power and b) n − 1 is a power of 2. The primes that are one more than a power of 2 are called Fermat primes, and only five are known: 3, 5, 17, 257, and 65537. Fermat and Gauss knew of these. Nobody has been able to prove whether there are any more.

Setting up an RSA system involves choosing large prime numbers p and q, computing n = pq and k = φ(n), and finding two numbers e and d such that ed ≡ 1 (mod k). The numbers n and e (the "encryption key") are released to the public, and d (the "decryption key") is kept private.

The security of an RSA system would be compromised if the number n could be factored or if φ(n) could be computed without factoring n.

This states that there is no number n with the property that for all other numbers m, m ≠ n, φ(m) ≠ φ(n). See Ford's theorem above.

As stated in the main article, if there is a single counterexample to this conjecture, there must be infinitely many counterexamples, and the smallest one has at least ten billion digits in base 10.[40]

The Disquisitiones Arithmeticae has been translated from Latin into English and German. The German edition includes all of Gauss' papers on number theory: all the proofs of quadratic reciprocity, the determination of the sign of the Gauss sum, the investigations into biquadratic reciprocity, and unpublished notes.

References to the Disquisitiones are of the form Gauss, DA, art. nnn.