The Tunnel of Eupalinos or Eupalinian aqueduct (Modern Greek: Efpalinio orygma, Ευπαλίνειο όρυγμα) is a tunnel of 1,036 m (3,399 ft) length in Samos, Greece, built in the 6th century BC to serve as an aqueduct. The tunnel is the second known tunnel in history which was excavated from both ends (Ancient Greek: αμφίστομον, amphistomon, "having two openings"), and the first with a geometry-based approach in doing so.[1] Today it is a popular tourist attraction. 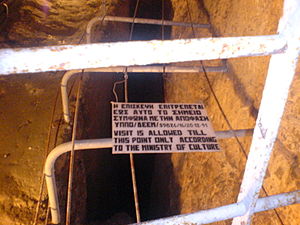 In the sixth century BCE, Samos was ruled by the famous tyrant Polycrates. During his reign, two groups working under the direction of the engineer Eupalinos from Megara dug a tunnel through Mount Kastro to build an aqueduct to supply the ancient capital of Samos (today called Pythagoreion) with fresh water. This was of utmost defensive importance, as the aqueduct ran underground it was not easily found by an enemy who could otherwise cut off the water supply. The Eupalinian aqueduct was used for a thousand years, as proved from archaeological findings. It was rediscovered in 1882-1884 and today is open to visitors.

The text of Herodotus

The Eupalinian aqueduct or ditch, is cited by Herodotus (Histories 3.60), without whom it would not have been discovered:

And about the Samians I have spoken at greater length, because they have three works which are greater than any others that have been made by Hellenes: first a passage beginning from below and open at both ends, dug through a mountain not less than a hundred and fifty orguia in height; the length of the passage is seven stadia and the height and breadth each eight feet, and throughout the whole of it another passage has been dug twenty cubits in depth and three feet in breadth, through which the water is conducted and comes by the pipes to the city, brought from an abundant spring: and the designer of this work was a Megarian, Eupalinos the son of Naustrophos. This is one of the three; … 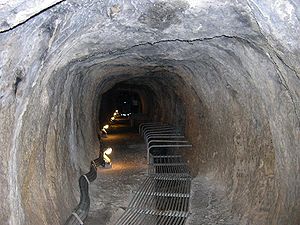 The tunnel took water from an inland spring, which was roofed over and thus concealed from enemies. A buried channel, with periodic inspection shafts, winds along the hillside to the northern tunnel mouth. A similar hidden channel, buried just below the surface of the ground, leads from the southern exit eastwards to the town of Pythagoreion.

In the mountain itself, the water used to flow in pipes in a separate channel several metres below the human access channel, connected to it by shafts or by a trench.

The southern half of the tunnel was dug to a larger dimensions than the northern half, which in places is only just wide enough for one person to squeeze through, and has a pointed roof of stone slabs to prevent rockfalls. The southern half, by contrast, benefits from being dug through a stabler rock stratum.

The two headings meet at a dogs-leg, a technique which was used to avoid the two tunnels missing each other, as explained in the paragraph "Surveying techniques".

Surveying techniques of the tunnel

The method Eupalinos employed to make the two groups meet in the middle of the mountain, is documented by Hermann J. Kienast and other researchers. In planning the digging, Eupalinos used what are now well-known principles of geometry, which were codified by Euclid several centuries later. With a length of 1,036 metres (3,399 ft), the Eupalinian subterranean aqueduct is famous today as one of the masterpieces of ancient engineering.

Eupalinos was aware that error in measurement and staking could make him miss the meeting point of the two teams, either horizontally or vertically. He therefore employed the following techniques:

In the horizontal plane

Since two parallel lines never meet, Eupalinos recognized that an error of more than two metres (6.6 ft) horizontally (approximate cross section was 1.8 by 1.8 metres or 5.9 by 5.9 feet), would make him miss the meeting point. Having calculated the expected position of the meeting point, he changed the direction of both tunnels, as shown in the picture (one to the left and the other to the right), so that a crossing point would be guaranteed, even if the tunnels were previously parallel and far away.

In the vertical plane

Similarly, there was a possibility of deviations in the vertical sense, even though his measurements were quite accurate; Kienast reports a vertical difference in the opening of the tunnels of only four centimetres (1.6 in). However, Eupalinos could not take a chance. He increased the possibility of the two tunnels meeting each other, by increasing the height of both tunnels. In the north tunnel he kept the floor horizontal and increased the height of the roof, while in the south tunnel, he kept the roof horizontal and increased the height by changing the level of the floor. His precautions in the vertical sense proved unnecessary, since measurements show that there was very little error.

However recent research has shown that Eupalinos used three straight lines for his navigation. First he constructed a “mountain” line, over the mountain at the easiest part of the summit which gave a non-optimal position both for feeding water into the tunnel and for water delivery to the city. He connected a “south line” to the mountain line at the south side going straight into the mountain around which Eupalinos undulated the south tunnel. At the north side a “north line” is connected to the mountain line. This line guided the cut into the mountain from the north side. After 273 meters Eupalinos directed the tunnel to the west obviously because of a combination of water, weak rock and mud. When leaving the north line Eupalinos used for navigating an equal legged triangle with angles 22.5, 45 and 22.5 degrees in theory. Measuring errors occurred and were handled by Eupalinos within the accuracy he could obtain. The cutting of the south tunnel was stopped after 390 meter for the north tunnel to catch up. For the rendezvous of the two tunnels a tentacle was applied at the head of the south tunnel giving 17 meters wider catching width. When the two tunnels reach within earshot which can be estimated for this rock to approximate 12 meters, the tunnels are directed towards each other and met at a nearly right angle. This took place almost under the summit but this was coincidental. Eupalinos leveled around the mountain probably following a contour line but not necessary at the same level as the tunnel. He underestimated his measuring accuracy because before the rendezvous Eupalinos raised the ceiling of the north tunnel by 2.5 m and lowered the floor of the south tunnel by 0.6 m, giving him a catching height of almost 5 meters. At the rendezvous the closing error in altitude for the two tunnels was a few decimeters. Eupalinos used a unit of 20.59 meters for distance measurements and 7.5 degrees (1/12 of a right angle) for setting out directions.[2]