EuroBrun Racing was an Italo-Swiss Formula One constructor based in Senago, Milan, Italy. They participated in 46 grands prix, entering a total of 76 cars.

The team was a combination of two outfits - the mechanical manpower and skill of Giampaolo Pavanello's Euroracing team, who had also run the factory-backed Alfa Romeo Formula One team from 1982–85, and the financial muscle and organisational skill of Swiss slot machine magnate Walter Brun, who ran the Brun Motorsport sports car team. 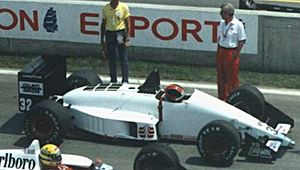 Oscar Larrauri driving for EuroBrun at the 1988 Canadian Grand Prix.

For the team's debut season in 1988, Mario Tolentino designed the ER188 chassis, to be powered by a normally-aspirated 3.5-litre Cosworth DFZ engine. Formula 3000 champion Stefano Modena and long-time Brun stalwart Oscar Larrauri were signed to drive. Despite a solid if unspectacular start to the season, EuroBrun were soon struggling as money ran low. There was internal trouble when Brun unsuccessfully tried to replace Larrauri with Christian Danner, and Euroracing were showing disinterest in Formula One. Both drivers failed to qualify at certain events (Modena missing out four times, and being excluded from another two races for technical infringements, and Larrauri failing seven times), and Modena's 11th place at the Hungarian Grand Prix was their best result.

Before the 1989 season, Euroracing slimmed down to a nominal level of involvement, in the shape of a handful of engineers and mechanics. EuroBrun scaled back to a single car, to be driven by Gregor Foitek, while the ER188 was modified slightly to take a Judd V8 engine and Pirelli tyres. The team would only make it through pre-qualifying once, in the opening race of the season in Brazil, and then Foitek failed to qualify. Even the introduction of George Ryton's new ER189 for the German Grand Prix did not help. Foitek quit after the Belgian Grand Prix, to be replaced by the returning Larrauri, who was no more successful.

Despite failing to start a single race in 1989, the team returned in 1990 with two cars once again. Euroracing had now left the partnership altogether, and the team started the season with the ER189. Roberto Moreno led the team, with Claudio Langes in the second car. Langes would not make it through pre-qualifying once. A freak qualifying session at the opening race of the season in the United States saw Moreno start 16th on the grid, and he eventually finished 13th. The capable Brazilian qualified again in San Marino, and came close on other occasions, but as Brun lost enthusiasm, the EuroBruns fell further and further away from the grid. After 14 rounds, the team withdrew from the Formula One Championship, having made only 21 starts from 76 entries.