From Infogalactic: the planetary knowledge core
Jump to: navigation, search
For other uses, see Euro league.

The Turkish Airlines Euroleague, commonly known as the Euroleague, is the highest level tier and most important professional club basketball competition in Europe, with teams from up to 18 different countries, members of FIBA Europe. For sponsorship reasons, for five seasons starting with 2010–11, it is named the Turkish Airlines Euroleague.[1] The competition is controlled by the privately held Euroleague Basketball Company, and features clubs that come from a Europe-wide consortium of leading professional basketball leagues, called ULEB. During the season, the Euroleague is broadcast on television in 199 countries and territories.[2] It can be seen by up to 245 million (800 million via satellite) households weekly in China.[3] It is also televised in the United States and Canada on NBA TV and available online through ESPN3. The Euroleague Final Four is broadcast on television in 201 countries.[4]

The Euroleague (or historically called, the European Champions' Cup) was originally established by FIBA and it operated under its umbrella from 1958 until the summer of 2000, concluding with the 1999–00 season. That was when Euroleague Basketball Company was created.

FIBA had never trademarked the "Euroleague" name, even though it had used that name for the competition since 1996. Euroleague Basketball simply appropriated the name, and since FIBA had no legal recourse to do anything about it, it was forced to find a new name for its championship series. Thus, the following 2000–2001 season started with 2 separate top European professional club basketball competitions: the FIBA SuproLeague (previously known as the FIBA Euroleague) and the brand new Euroleague 2000–01 season.

In essence, the authority in European professional basketball was divided over club-country lines. FIBA stayed in charge of national team competitions (like the FIBA EuroBasket, the FIBA World Cup, and the Summer Olympics), while Euroleague Basketball took over the European professional club competitions. From that point on, FIBA's Korać Cup and Saporta Cup competitions lasted only one more season before folding, which was when Euroleague Basketball launched the ULEB Cup, now known as the Eurocup.

Names of the competition

The next phase is the Regular Season, in which 24 teams participate; from 2009–10, the participants will include 23 clubs automatically entered into the Regular Season plus the Qualifying Round winner. Each team plays two games (home-and-away) against every other team in its group. At the end of the Regular Season, the field is cut from 24 to 16. Before 2008–09, the teams were divided into three groups of eight teams each, with the top five teams in each group plus the top sixth-place finisher advancing. Now, the Regular Season involves four groups with six teams each, with the first four teams in each group advancing. Since the 2013–14 season, the eight eliminated teams in this stage are dropped to the Eurocup. 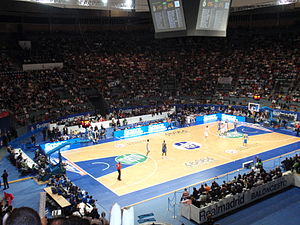 Euroleague game in Madrid in 2009.

The third phase, the Quarterfinal round, has been played since the 2004–05 season. Before, only the group winners advanced to the Euroleague Final Four (see below). Now, the first- and second-place teams from each group advance. In the quarterfinal round, the first-place team from each group is matched against a second-place team from another group in a playoff series. Through the 2007–08 season, the series was best-of-three, and expanded to best-of-five for 2008–09. Home advantage in the series goes to the first-place team.

The Final Four, held at a predetermined site, features the winners of the four quarterfinal series in one-off knockout matches. The semifinal losers play for third place; the winners play for the championship.

For the 2012–13 Euroleague season the Top 16 was changed from four groups of four teams to two groups of eight teams. The four best teams in each group will go on the quarterfinals.

The league usually, but not always, includes domestic champions from the leading countries. Depending on the country, places in the Euroleague may be awarded on the basis of:

For example, two 2007–08 domestic champions from ULEB member countries did not compete in the 2008–09 Euroleague—Zadar (Croatia) and Hapoel Holon (Israel). Zadar played in the second-level Eurocup in 2008–09. Hapoel Holon, however, did not compete in any of the three European continental club competitions—not even the third-tier EuroChallenge (which is run by FIBA Europe instead of Euroleague Basketball Company)—because of financial difficulties.

Starting with the 2009–10 season, the entrance criteria changed:

Teams with A licence

Teams that lost the A licence

Effective as of the 2012–13 season, Euroleague clubs with an "A License" must host their home matches in arenas that have a seating capacity of at least 10,000 people. In 2008, Euroleague Basketball Company decided to increase the arena seating requirement to 10,000 within four years time in order to force clubs to move into and/or build bigger arenas. This was done in hopes of increasing revenues through more ticket sales. Non "A License" Euroleague clubs must play in arenas that seat at least 5,000 people.

These are the teams that participate in the 2015–16 season:

Since the beginning of the 2000–01 season (Euroleague Basketball Company era):