From Infogalactic: the planetary knowledge core
Jump to: navigation, search
This article is about the trophy. For the competition formerly known by the same name, see UEFA Champions League.

Several different physical trophies have had the name, as a club was entitled to keep the cup after five wins or three consecutive wins, with a new cup having to be forged for the following season.[1][2][3] 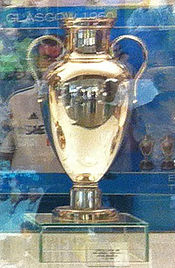 Since 2009, Champions League winners have not kept the real trophy, which remains in UEFA's keeping at all times. A full-size replica trophy, the Champions League winners trophy, is awarded to the winning club with their name engraved on it.[4] Winning clubs are also permitted to make replicas of their own; however, they must be clearly marked as such and can be a maximum of eighty percent the size of the actual trophy.[5]

The original European Cup trophy was donated by L'Équipe, a French sports newspaper.[6] This trophy was awarded permanently to Real Madrid in March 1967.[6] At the time, they were the reigning champions, and had won six titles altogether, including the first five competitions from 1956 to 1960. Celtic thus became the first club to win the cup in its current design in 1967.

The replacement trophy, with a somewhat different design from the original, was commissioned by UEFA from Jörg Stadelmann, a jeweller from Bern in Switzerland.[6] At a cost of 10,000 Swiss francs, it was silver, 74 cm high, weighing 11 kg. The trophy bears the title "COUPE DES CLUBS CHAMPIONS EUROPÉENS'". Subsequent replacement trophies have replicated this design.[6] The shape of the handles have earned it the nickname of "big ears" in multiple languages, including French ("la Coupe aux grandes oreilles") and Spanish ("La Orejona").

The trophy that was awarded at the 2012 UEFA Champions League Final is the sixth, and has been in use since 2006, after Liverpool won their fifth European Cup in 2005.[7] 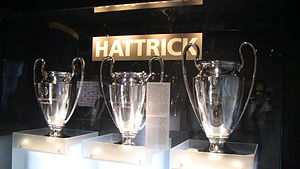 The three consecutive European Cup trophies won by Bayern Munich, 1974–76. The one on the far right is the real CL trophy, given to Bayern permanently in 1976. The ones on the left are slightly smaller replicas.

The previous rule, introduced before the 1968–69 season, allowed a club to keep the trophy after five wins or three consecutive wins.[6] At that point, Real Madrid were the only club meeting either qualification, and indeed met both. Once a club had been awarded the trophy, the count was reset to zero.[1] For example, a club with no prior titles which won six titles in a row would have been permanently awarded trophies after the third and sixth wins (each for three-in-a-row) but not after their fifth win. A club whose Champions League title win was not a fifth overall or third consecutive previously kept the real trophy for ten months after their victory and received a scaled-down replica to keep permanently. Since 2009, the real trophy remains with UEFA at all times, but the winning club now receives a full-sized replica with their name engraved on it.[4]

Since 2009, a club that gets three consecutive or five overall wins will get a special mark of recognition, the multiple-winner badge[8]

The multiple-winner badge,[2] was introduced for the start of the 2000–01 competition[9] for clubs that kept the trophy permanently. The badge itself adorns the left sleeve of the team's shirt during Champions League games. It is a navy blue oval on which is an outline of the current trophy in white, overlaid with part of the Champions League starball logo. Above the trophy is the total number of titles held by the club. The badge will still be awarded to clubs winning five overall, or three consecutive titles. From 2012, the badge became grey with a new design.[10] Since then, one team has reached five overall, or three consecutive titles: 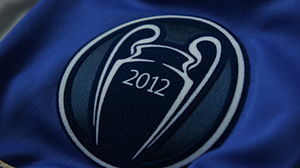 The title-holder logo worn by Chelsea in the 2012-13 season, the same design has been used since.

A separate "title-holder logo" is worn by the reigning Champions League champions in the following season's competition in place of the regular patch worn by the other competing teams.[3] The logo is predominantly dark blue and was introduced in 2004–05, with Porto as the defending champions.[11][12] The distinction between the title-holder logo and the badge of honour can be compared to the distinction between the scudetto (shield) worn by the reigning Serie A champions in Italy, and the stella (star) worn by teams with over 10 Serie A titles in total. However, whereas Juventus sport 3 stars as they have won over 30 titles, there is no provision for multiple UEFA badges of honour, as the count within the badge can be incremented indefinitely. Until 2010–11, the title holders also played with the match ball used in their triumphant final in their home games. From 2011–12, the title holders use the same match ball as the 31 other teams.

The original design for the title-holder badge featured two of the interconnecting stars of the competition's star ball logo at the top, with the caption 'champions' and the season of triumph in the centre of the badge. It was slightly modified in 2008–09, to feature the entirety of the star ball logo, albeit with the other stars faded out, and it was drastically changed for the 2009–10 competition. Without the star ball background, it instead featured a design of the trophy which was used to promote the previous season's final.[13] It was revamped again in 2010–11, to feature part of the star ball on show below the 'champions' caption. The current design was first worn by Chelsea in 2012–13, it features an outline design of the trophy along with the year of triumph.[14]