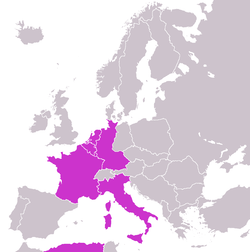 The European Defence Community (EDC) was a plan proposed in 1950 by René Pleven, then the French Prime Minister, in response to the American call for the rearmament of West Germany. The intention was to form a pan-European defence force as an alternative to Germany's proposed accession to NATO, meant to harness its military potential in case of conflict with the Soviet bloc. The EDC was to include West Germany, France, Italy, and the Benelux countries. A treaty was signed on 27 May 1952, but the plan never went into effect.

The EDC would have established a pan-European military, divided into national components. In this military, the French, Italian, Belgian, Dutch and Luxembourgish components would report to their national governments, whereas the German component would report to the EDC. This was due to the fear of a return of German militarism, so it was desired that the German government would not have control over the German military. However, in the event of its rejection, it was agreed to let the German government control its own military in any case (something which the treaty would not have provided). The EDC also provided for centralized military procurement. The EDC would have had a common budget, arms and institutions.

The plan collapsed when it failed to obtain ratification in the French Parliament. There were Gaullist fears that the EDC threatened France's national sovereignty, constitutional concerns about the indivisibility of the French Republic, and fears about Germany's remilitarization. French Communists opposed a plan tying France to the capitalist USA and setting it in opposition to the Communist bloc. Other legislators worried about the absence of the United Kingdom. The EDC went for ratification in the French National Assembly on 30 August 1954, and failed by a vote of 319 against 264. By this time, concerns about a future conflict faded with the death of Joseph Stalin and the end of the Korean War. Concomitant to these fears were a severe disjuncture between the original Pleven Plan of 1950 and the one defeated in 1954. Divergences included military integration at the division rather than battalion level and a change in the command structure putting the NATO Supreme Commander in charge of EDC operational capabilities. Then Prime-Minister, Pierre Mendès-France attempted to placate the treaty's detractors by attempting to ratify additional protocols with the other signatory states. These included the sole integration of covering forces, or in other words, those deployed within Germany, as well as the implementation of greater national autonomy in regard to budgetary and other administrative questions. Great Britain approved of the plan in principle, but agreed to join only if the supranational element was decreased.

After the failed ratification in the French National Assembly, the EC member states tried to create foreign policy cooperation in the De Gaulle-sponsored Fouchet Plan (1959-1962). European foreign policy was finally established during the third attempt with European Political Cooperation (EPC) (1970). This became the predecessor of the Common Foreign and Security Policy (CFSP).

Today the European Union and NATO and formerly the Western European Union, all carry out some of the functions which was envisaged for the EDC, although none approach the degree of supranational military control that the EDC would have provided for.