From Infogalactic: the planetary knowledge core
Jump to: navigation, search
This article is about the Formula One race. For other uses, see European Grand Prix (disambiguation).

The European Grand Prix (sometimes referred to as the Grand Prix of Europe) is a Formula One event that was introduced during the mid-1980s and was held regularly from 1999 until 2012. The most recent host venue for this event was the Valencia Street Circuit in Valencia, Spain, hosting the race from 2008 until 2012. The race was removed from the calendar in 2013. In 2016 the race will return, being run on a street circuit in Baku, Azerbaijan

Since its reintroduction, the European Grand Prix has usually been held in a country in Europe that also holds a national Grand Prix in that same year.

The European Grand Prix was created as an honorific title by the AIACR, the FIA's predecessor in the organisation of motor racing events. The first race to receive the title was the Italian Grand Prix, in 1923, and it was followed by the French Grand Prix and Belgian Grand Prix. After a hiatus in 1929, Spa received the last honorific title of the pre-WWII years, in 1930.

The title was revived by the FIA after World War II, and was first given to the Belgian Grand Prix in 1947, and was distributed across several countries until the 1977 British Grand Prix, the last race to receive the honorific title. All post-war honorific European Grands Prix were Formula One races except for the 1952 event, which was run to Formula Two regulations.

The Italian Grand Prix was named the European Grand Prix seven times, which was more than any other race. It received the title three times in the 1920s.

The event was initially created as a stop-gap. In 1983, the Formula One schedule originally featured a race near Flushing Meadows Park in New York. When the race was cancelled three months before the event, track organizers at Brands Hatch were able to create a European Grand Prix at the track in its place. The success of the event, buoyed by a spirited battle for the World Championship, led to the event returning on the schedule the following year.

Brands Hatch returned to host the European Grand Prix in 1985, but the race was replaced in 1986 by the Hungarian Grand Prix.

In 1990, a wealthy Japanese businessman, Tomonori Tsurumaki, built the Nippon Autopolis with the idea of hosting a Formula One race. In 1992, plans were made to have an Asian Grand Prix in 1993 to replace the Mexican Grand Prix on the schedule. However, these plans failed to materialize. Instead, Bernie Ecclestone added a race at Donington Park to the schedule, which brought back the European Grand Prix moniker. The race was the brainchild of Tom Wheatcroft, who had been trying to bring F1 to the track since an abortive attempt to host the British Grand Prix in 1988. The first and so far only race at Donington Park resulted in Ayrton Senna's victory in mixed wet and dry conditions.

The European race would go the following season to Jerez in Spain. Jerez hosted round 14 of 16 in 1994 and the season finale in 1997, and it was the site of the famous collision between Michael Schumacher and Jacques Villeneuve which saw Schumacher get disqualified from the championship and it was also the scene of Mika Häkkinen's first Formula One victory.

Brands Hatch was unable to host the European Grand Prix in 1984, so the European GP went to a redesigned and shorter Nürburgring circuit in 1984. It was a far cry from the 14 mile Nürburgring that most were used to seeing, and was initially unpopular during Formula One's return.

The race returned to Nürburgring in 1995, which was now popular again with drivers. but after complaints that no other countries were to get the race, the Nürburgring race was renamed the Luxembourg Grand Prix. Jerez got the race back in 1997 as a replacement for the Portuguese Grand Prix.

The 1999 race saw torrential rain conditions which caused numerous retirements, presenting Johnny Herbert with the opportunity to take Stewart Grand Prix's first and only victory in its final season before being sold to Ford.

The race continued to be held at the Nürburgring until 2007. On August 29, 2006 it was announced that it had been removed from the F1 calendar for the 2007 season. From then there would only be one GP hosted in Germany each year, alternating between Hockenheimring and Nürburgring. However, what the name of this Grand Prix would be was uncertain for a time; while originally intended to be the German Grand Prix from 2007,[1] the Nürburgring race of 2007 was renamed "Großer Preis von Europa" (European Grand Prix)[2] due to a dispute over the ownership of the title "German Grand Prix".[3]

From 2008 to 2012 the European Grand Prix took place in Valencia, Spain. During the 2009 event, Valencia signed a deal for a further 5 races, which put Valencia on the calendar until 2014.

Despite this, in March 2012, it was announced that the European Grand Prix was to be discontinued in 2013, with the Spanish Grand Prix planned to alternate between Barcelona and Valencia.[4] However, Barcelona has retained the race since 2013, and the Valencia circuit was removed from the calendar.

The European Grand Prix will return to the Formula One World Championship in 2016, being held on the Baku City Circuit in Azerbaijan.

Winners of the European Grand Prix

Only includes standalone events. Bold indicates a driver active in the current season.

Only includes standalone events. Bold indicates a constructor active in the current season.

By year: The European Grand Prix as a standalone event 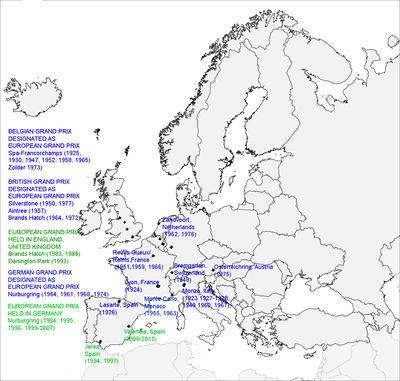 By year: The European Grand Prix as an honorary designation