The United Kingdom's component of the 2014 European Parliament election was held on Thursday 22 May 2014,[2][3] coinciding with the 2014 local elections in England[4] and Northern Ireland.

Most of the results of the election were announced on Sunday 25 May, after voting closed throughout the 28 member states of the European Union. In total, 73 Members of the European Parliament were elected from the United Kingdom using proportional representation. England, Scotland and Wales use a closed-list party list system of PR (with the D'Hondt method), while Northern Ireland used the single transferable vote (STV).

The UK Independence Party (UKIP) came top of the poll – the first time a political party other than the Labour Party or Conservative Party has won the popular vote in a British election since the 1906 general election.[5][6] It is also the first time a party other than the Labour and Conservatives won the largest number of seats in a national election since the December 1910 general election.[7][8][9]

Figures released in December 2014 showed that the Conservatives and UKIP each spent £2.96m on the campaign, the Liberal Democrats £1.5 million and the Labour party approximately £1m.[11] 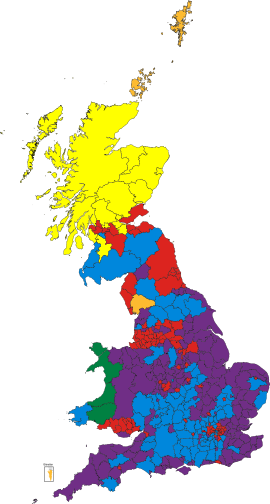 An Independence from Europe

We Demand a Referendum

MEPs before the 2014 election, by European Parliament group

Between the 2009 and 2014 elections, there were various changes to the breakdown of UK members. In December 2011 a 73rd member from the UK (Anthea McIntyre, Conservative) was allocated to England because of the implementation of the Treaty of Lisbon. There were also various defections:

Thus, before the 2014 election, the following parties had MEPs representing UK constituencies: 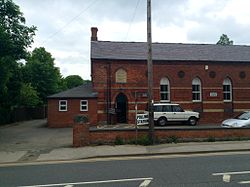 As has been the case since 1999, the election is conducted in a total of 12 electoral constituencies: using the regional Party-list proportional representation system, in each of the government's nine English regions, and in Scotland and in Wales, but the Single transferable vote system in Northern Ireland. As a result of the Treaty of Lisbon coming into force, the UK became entitled to a 73rd MEP as from November 2011. The Electoral Commission performed a reallocation in keeping with the same procedures they used to allocate 72 MEPs and an extra Conservative MEP was allocated to the West Midlands constituency based on the 2009 vote.[19]

1 Includes Gibraltar, the only British overseas territory which is part of the European Union.

The European Parliamentary Elections (Returning Officers) Order 2013 provides for the designated Returning Officer for each electoral region to be the council official responsible for elections in each of the following Westminster constituencies: Kettering for the East Midlands, Chelmsford for the Eastern region, Lewisham, Deptford for the London region, Sunderland Central for the North East region, Manchester Central for the North West region, Falkirk for Scotland, Southampton, Test for the South East region, Poole for the South West region, Preseli Pembrokeshire for Wales, Birmingham Ladywood for the West Midlands region, Leeds Central for the Yorkshire and Humber region, and Belfast South for the Northern Ireland Region[20]

(Elected in 2009 as British National Party)

On 20 February, the Deputy Prime Minister Nick Clegg used his weekly phone-in show on LBC 97.3 to challenge the leader of the UK Independence Party, Nigel Farage, to a live public debate on the UK's membership of the European Union.[33] Clegg said, "he is the leader of the party of 'out'; I am the leader of the party of 'in'. I think it's time we now have a proper, public debate so that the public can listen to the two sides of the argument and judge from themselves."[34][35] Farage accepted, but said he would also like to see Ed Miliband and David Cameron participate.[36]

The first hour-long debate between the two men was held on 26 March 2014 and was broadcast live on television by Sky News and on the BBC News Channel. The debate was hosted by LBC and moderated by Nick Ferrari.[37] After the first debate, a YouGov poll asked "Who performed better?", with 57% saying Farage did better compared to 36% for Clegg.

The second debate was held on BBC Two on 2 April in a special programme called The European Union: In or Out, moderated by David Dimbleby. Farage was again seen as outperforming his rival, with a snap poll by YouGov showing 68% of people thought he did better in the debate compared to 27% for Clegg. A snap Guardian poll also showed that 69% thought Farage won the debate.[38]

Despite David Cameron and Ed Miliband declining to participate in the leaders' debates, the Conservative and Labour parties were represented in a lower-profile debate on the BBC. On 13 February Andrew Neil hosted a four-way debate on the BBC's Sunday Politics programme. The Conservatives were represented by Syed Kamall MEP, Labour by Richard Howitt MEP, the Liberal Democrats by Baroness Sarah Ludford MEP and the UK Independence Party by Patrick O'Flynn, the party's Director of communications and an MEP candidate.[39][40]

These opinion polls are for Great Britain and generally exclude Northern Ireland. The methodology used for these polls broadly corresponds to that used for opinion polling for the next United Kingdom general election; see that article for the methodology used by each polling company. YouGov have experimented with different methods of polling for these elections, using their own method for their 8–9 January 2013 poll and another corresponding to that used by Survation and ComRes for their 10–11 January 2013 poll (both below) and argue that their method gives more accurate answers.[41] Data for these polls are generally gathered at the same time as the data for General Election polling.