The European Rally Championship is the European continental championship series in rallying. It is organised by the Fédération Internationale de l'Automobile (FIA). 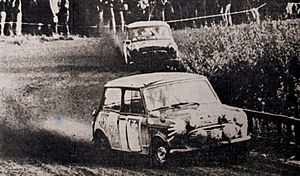 Timo Mäkinen and Rauno Aaltonen at the 1965 1000 Lakes Rally

The European Rally Championship was first contested in 1953 and in the following year was one of the most prestigious rallying series. However, with the introduction of the World Rally Championship for manufacturers in 1973, and in particular with the drivers' World Championship being contested from 1979 on, the importance of the ERC began to decline.[1]

Over many years, a typical ERC season featured around 40 rallies, and from 1974 on, the rallies were assigned different coefficients (1, 2, 3 or 4) that were multiplied with the championship points. This made it very tedious to follow the championship and keep an overview. Changing the coefficients to 2, 5, 10 and 20 did also not improve the situation. Thus, the ERC was more a series for event organizers than an interesting championship for drivers.[1]

A first improvement was implemented for the 2004 season, where the number of events counting for the European Rally Championship were reduced to those with coefficient 20, while the other rallies became part of regional "European Rally Cups". A ERC season now featured around 10 to 12 events and thus had a clearer structure.[1]

Since 2013, French broadcaster Eurosport is the promoter of ERC, and the Intercontinental Rally Challenge (IRC), previously organized and promoted by Eurosport, was discontinued.

The 2011 ERC season featured 11 rallies. Luca Rossetti was the winner of 4 events and won the championship.

The 2011 ERC season started on 14 April 2011 and featured 11 rallies. It ended on 29 October with the Rallye International du Valais. Italian driver Luca Rossetti claimed his third European championship title after winning 5 of the events. In total, 28 registered drivers from 7 different countries competed in the championship.

The 2012 season started in January with a new event, the "Jänner Rallye" in Austria. As an important change, drivers no longer had to register for the championship. Finnish driver Juho Hänninen won the championship.

The season started with the Jänner Rallye in Austria on 4 January 2015, and will end with the Rallye International du Valais on 7 November. For this year the drivers have to register for the championship, and the categories have been renamed into ERC 1 (for S2000, R5 and RRC (last year) cars), ERC 2 (category for R4 production cars (previously titled N4)) and ERC 3 (for R1, R2 and R3 cars). 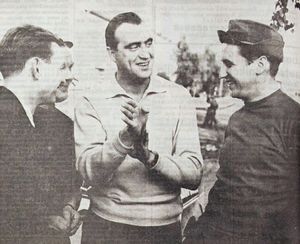