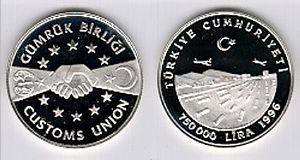 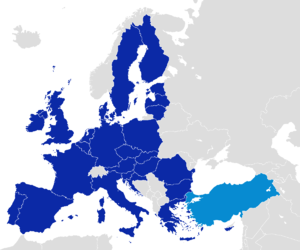 On 31 December 1995, a 6 March 1995 Decision of the EC-Turkey Association Council, established by the Ankara Agreement, to implement a customs union (colloquially called Turkish: Gümrük Birliği) between Turkey and the European Union came into effect.[1] Goods can travel between the two entities without any customs restrictions. The Customs Union does not cover essential economic areas, such as agriculture, to which bilateral trade concessions apply, services or public procurement.

In 1996 a free trade area was established between Turkey and the European Union for products covered by the European Coal and Steel Community. Decision 1/98 of the Association Council covers trade in agricultural products.

In addition to providing for a common external tariff for the products covered, the Customs Union foresees that Turkey is to align to the acquis communautaire in several essential internal market areas, notably with regard to industrial standards.

Turkey's main exports to EU and imports from EU are dominantly industrial (95% of all its imports and exports).[2] Since 1996, Turkey's gross domestic product has increased 4-fold, making it one of the fastest growing economies in the world. At the same time, however, the foreign trade deficit of Turkey (between EU) has increased 2 fold and 6 fold with non-EU countries (the rest of the world), between 1995–2008. The Customs Union is a large factor in both of these developments. Some commentators have pointed to a vicious circle that the profits generated from imports are being used to buy raw materials and assembly parts again from Europe. This shows that Turkey is dependent on European raw materials and parts.[2]

Some argue that the customs union treaty is quite like the Capitulations of the Ottoman Empire.[3] It was giving economical and political powers to a union (EU in this case) which the signing party (Turkey) was and still is not a member:

Main article: Accession of Turkey to the European Union

Turkey has been an associate member of the European Community (EC) since 1964, following the signing in 1963 of the Ankara Agreement (EEC-Turkey Association Agreement (1963)) with the EEC. Turkey applied for full membership on 14 April 1987.

The decision to consider Turkey's application was deferred until 1993, because the European Community was in the process of becoming the even (politically and economically) tighter European Union. The fall of the Soviet Union and German reunification delayed the decision on Turkish membership even more. During those years the European Community had also become reluctant to consider Turkey's application.

At the Helsinki summit in December 1999 Turkey was given the status of a candidate country. At the end of 2004, the European Commission has issued a report with positive recommendations to the European Council, indicating the degree of compliance by Turkey of the Copenhagen political criteria. On this basis, the European Council has decided to start accession negotiations with Turkey on 3 October 2005.