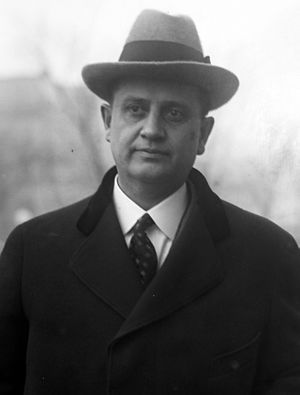 James Everett Sanders (March 8, 1882 – May 12, 1950) was an American political figure. He was Presidential secretary to President Calvin Coolidge and chairman of the Republican National Committee.

Born in Coalmont, Indiana, Sanders attended the Indiana State Normal School, now Indiana State University, and then graduated from Indiana University. He practiced law in Terre Haute, Indiana. From 1917 until 1925 Sanders represented Indiana in the United States Congress. He declined to be re-nominated in 1924, and instead became director of the Speakers' Bureau of the Republican National Committee. Subsequently in 1925, he accepted the job and replaced C. Bascom Slemp as the personal secretary to President Coolidge early in his second term.[1] During his time as presidential secretary (a position equivalent to the current White House Chief of Staff) Sanders amassed a collection of presidential speeches that became known as the 'Everett Sanders Papers',[2] which contain speeches from June 22, 1925 until February 22, 1929. Sanders also became a member of the Alfalfa Club after 1926.

Sanders was so highly regarded that, after leaving the position in 1929 after Coolidge's second term, President Herbert Hoover appointed him to chair the Republican National Committee, a position he held from 1932 until he stepped down in 1934 after Hoover's disastrous re-election campaign.[3]

Sanders died in Washington, D.C. in 1950, and is buried in Indiana, in the Highland Lawn Cemetery in Terre Haute.