From Infogalactic: the planetary knowledge core
Jump to: navigation, search
For other uses, see Eversley (disambiguation).

Eversley is a village and civil parish in the Hart district of northeast Hampshire, England. The village is located around 11 miles (18 km) northeast of Basingstoke and around 2.5 miles (4 km) west of Yateley. The River Blackwater, and the border with Berkshire, form the northern boundary of the parish.

Eversley is regarded as a wealthy community and is situated in the least deprived local council area in England.

Eversley means 'Wild Boar Clearing' and the boar is the symbol of the village, as shown on the village sign.

The parish contains a number of hamlets: Eversley Village (sometimes called Eversley Street), Eversley Centre, Eversley Cross, Lower Common and Up Green. The historical parish also included Bramshill, a modern civil parish largely covered by plantation forest, but also including the early 17th century Bramshill House. Eversley Centre and Eversley Cross (to the north of Yateley) are contiguous and constitute the main part of the village, whilst Eversley 'village' lies around 1 mile to the north on the A327 road towards Arborfield.

There are a number of other large country houses in Eversley: Firgrove Manor (now apartments), Glaston Hill House (private residence) and Warbrook House (now a Conference Centre). Monuments to their residents can be seen in St Mary's Church, a medieval building mostly rebuilt in the 18th century. The churchyard is the burial-place of Charles Kingsley, who for 35 years was rector of the parish. As you enter the churchyard, Kinglsey's grave is to be found to the left of the path some 10 metres beyond the entrance gate. Kingsley was a significant author and commentator in the 19th century. Among other novels he wrote The Water Babies and Westward Ho!. Kingsley was also a social critic and an early founder of 'Christian Socialism'. One of his poems, "The Bad Squire", may very well be a comment on local social conditions in the mid-nineteenth century, and an attack on the attitudes of local landlords. A copy of the poem can be found in the church. The present incumbent is the Reverend Mike Saunders, who is also Vicar of St. Barnabas, Darby Green. 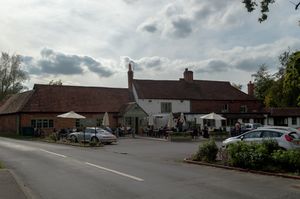 The Chequers is a Grade II listed building and was built in the 17th century with 19th- and 20th-century additions.[1]

There are four public houses in Eversley: The Frog and Wicket (formerly called The Cross, before that Le Toad and Stumps, and originally The Lamb), The Golden Pot, The White Hart and The Chequers. The Tally Ho is just over the river in Finchampstead, Berkshire.

In Eversley there is a primary school called Charles Kingsley's Primary School, founded by Charles Kingsley in 1853. It is a Christian school which offers mostly Christian Ethos. In 2011, it was inspected by OFSTED, and it received an outstanding on everything possible report. The school was named as one of 253 in the list of Her Majesty's Chief Inspector of Skills Annual Report. Charles Kingsley's is one of only 67 schools to be named on that list twice. Its recent exam results show the school to be in the top 1% of the country.

The is also an independent preparatory school in the village. The school was founded in Sunningdale in 1888 as a proprietorial boys’ preparatory boarding school, but since it has seen much evolution. It moved to the current site in Eversley in 1894, acquired charitable trust status under a governing board in 1955, opened a co-educational pre-prep in 1988 and attained full co-education in 1990. Since 1997 the school has worked a five-day week, with weekly and flexi-boarding from Year 3. The boar was taken as a symbol of the school, replacing the deer, to link it with the meaning of the name of the village Eversley.

The school currently accommodates around 350 pupils ranging in age from 3 months to 13 years. Children receive an outstanding education in a family environment, where happiness is seen as the key to success. Extensive use is made of the stunning 70 acre grounds where independent learning is encouraged. In 2013, the school celebrated its 125th anniversary. More information can be found at the St. Neot's School website.

On 1 April 1992, Jacqueline Palmer-Radford, a 40-year-old mother of two, was murdered. She had been raped and strangled and was found suffocated at her home Riversdale House (a former Post Office until 1981 which was demolished in 1996/7 and replaced by two executive houses). Her killer has never been found.

The case remains unsolved despite being featured on BBC TV's Crimewatch programme.[1][2][3][4]

Cricket has been played on the picturesque ground at Cross Green, Eversley for 220 summers. Eversley Cricket Club is one of the oldest in Hampshire. There is a big colts section and the men's teams are very successful.

Eversley F.C. was founded in 1910. They became the first winners of the Surrey Elite Intermediate League in 2009 and gained promotion to Division One of the Combined Counties League for the 2009-10 season.