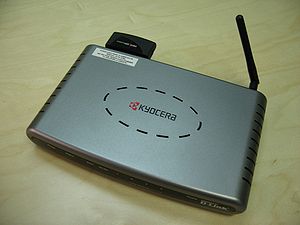 Evolution-Data Optimized (EV-DO, EVDO, etc.) is a telecommunications standard for the wireless transmission of data through radio signals, typically for broadband Internet access. EV-DO is an evolution of the CDMA2000 (IS-2000) standard that supports high data rates and can be deployed alongside a wireless carrier's voice services. It uses advanced multiplexing techniques including code division multiple access (CDMA) as well as time division multiplexing (TDM) to maximize throughput. It is a part of the CDMA2000 family of standards and has been adopted by many mobile phone service providers around the world particularly those previously employing CDMA networks. It is also used on the Globalstar satellite phone network.[1]

EV-DO service has been or will be discontinued in much of Canada in 2015.[2]

An EV-DO channel has a bandwidth of 1.25 MHz, the same bandwidth size that IS-95A (IS-95) and IS-2000 (1xRTT) use.[3] The channel structure, on the other hand, is very different. Additionally, the back-end network is entirely packet-based, and thus is not constrained by the restrictions typically present on a circuit switched network.

The EV-DO feature of CDMA2000 networks provides access to mobile devices with forward link air interface speeds of up to 2.4 Mbit/s with Rel. 0 and up to 3.1 Mbit/s with Rev. A. The reverse link rate for Rel. 0 can operate up to 153 kbit/s, while Rev. A can operate at up to 1.8 Mbit/s. It was designed to be operated end-to-end as an IP based network, and so it can support any application which can operate on such a network and bit rate constraints. 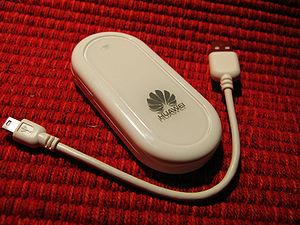 There have been several revisions of the standard, starting with Release 0 (Rel. 0). This was later expanded upon with Revision A (Rev. A) to support Quality of Service (to improve latency) and higher rates on the forward link and reverse link. Later in 2006 Revision B (Rev. B) was published, that among other features includes the ability to bundle multiple carriers to achieve even higher rates and lower latencies (see TIA-856 Rev. B below). The upgrade from EV-DO Rev. A to EV-DO Rev. B involves a software update to the cell site modem, and additional equipment for the new EV-DO carriers. Existing cdma2000 operators may also have to retune some of their existing 1xRTT channels to other frequencies, since Rev. B requires all DO carriers be within 5 MHz.

The initial design of EV-DO was developed by Qualcomm in 1999 to meet IMT-2000 requirements for a greater-than-2-Mbit/s down link for stationary communications, as opposed to mobile communication such as a moving cellular phone. Initially, the standard was called High Data Rate (HDR), but was renamed to 1xEV-DO after it was ratified by the International Telecommunication Union (ITU) under the designation TIA-856. Originally, 1xEV-DO stood for "1x Evolution-Data Only", referring to its being a direct evolution of the 1x (1xRTT) air interface standard, with its channels carrying only data traffic. The title of the 1xEV-DO standard document is "cdma2000 High Rate Packet Data Air Interface Specification", as cdma2000 (lowercase) is another name for the 1x standard, numerically designated as TIA-2000.

Later, likely due to the possible negative connotations of the word "only", the "DO" part of the standard's name 1xEV-DO was changed to stand for "Data Optimized". So EV-DO now stands for "Evolution-Data Optimized." The 1x prefix has been dropped by many of the major carriers, and is marketed simply as EV-DO.[4] This provides a more marketing-friendly emphasis that the technology was optimized for data.

The primary characteristic that differentiates an EV-DO channel from a 1xRTT channel is that it is time multiplexed on the forward link (from the tower to the mobile). This means that a single mobile has full use of the forward traffic channel within a particular geographic area (a sector) during a given slot of time. Using this technique, EV-DO is able to modulate each user’s time slot independently. This allows the service of users that are in favorable RF conditions with very complex modulation techniques while also serving users in poor RF conditions with simpler and more redundant signals.[5]

The forward channel is divided into slots, each being 1.667 ms long. In addition to user traffic, overhead channels are interlaced into the stream. These include the Pilot which helps the mobile find and identify the channel, the Media Access Channel (MAC) which tells the mobiles when their data is scheduled, and the Control Channel, which contains other information that the network needs the mobiles to know.

The modulation to be used to communicate with a given mobile is determined by the mobile itself. It listens to the traffic on the channel, and depending on the receive signal strength along with the perceived multi-path and fading conditions, makes its best guess as to what data-rate it can sustain while maintaining a reasonable frame error rate of 1-2%. It then communicates this information back to the serving sector in the form of an integer between 1 and 12 on the "Digital Rate Control" (DRC) channel. Alternatively, the mobile can select a "null" rate (DRC 0), indicating that the mobile either cannot decode data at any rate, or that it is attempting to hand off to another serving sector.[5]

The DRC values are as follows:[6]

Another important aspect of the EV-DO forward link channel is the scheduler. The scheduler most commonly used is called "proportional fair". It's designed to maximize sector throughput while also guaranteeing each user a certain minimum level of service. The idea is to schedule mobiles reporting higher DRC indices more often, with the hope that those reporting worse conditions will improve in time.

The system also incorporates Incremental Redundancy Hybrid ARQ. Each sub-packet of a multi-slot transmission is a turbo-coded replica of the original data bits. This allows mobiles to acknowledge a packet before all of its sub-sections have been transmitted. For example, if a mobile transmits a DRC index of 3 and is scheduled to receive data, it will expect to get data during four time slots. If after decoding the first slot the mobile is able to determine the entire data packet, it can send an early acknowledgement back at that time; the remaining three sub-packets will be cancelled. If however the packet is not acknowledged, the network will proceed with the transmission of the remaining parts until all have been transmitted or the packet is acknowledged.[5]

The reverse link (from the mobile back to the Base Transceiver Station) on EV-DO Rel. 0 operates very similar to that of 3G1X CDMA. The channel includes a reverse link pilot (helps with decoding the signal) along with the user data channels. Some additional channels that do not exist in 3G1X include the DRC channel (described above) and the ACK channel (used for HARQ). Only the reverse link has any sort of power control, because the forward link is always transmitted at full power for use by all the mobiles.[6] The reverse link has both open loop and closed loop power control. In the open loop, the reverse link transmission power is set based upon the received power on the forward link. In the closed loop, the reverse link power is adjusted up or down 800 times a second, as indicated by the serving sector (similar to 3G1X).[7]

All of the reverse link channels are combined using code division and transmitted back to the base station using BPSK[8] where they are decoded. The maximum speed available for user data is 153.2 kbit/s, but in real-life conditions this is rarely achieved. Typical speeds achieved are between 20-50 kbit/s.

Revision A of EV-DO makes several additions to the protocol while keeping it completely backwards compatible with Release 0.

These changes included the introduction of several new forward link data rates that increase the maximum burst rate from 2.45 Mbit/s to 3.1 Mbit/s. Also included were protocols that would decrease connection establishment time (called enhanced access channel MAC), the ability for more than one mobile to share the same timeslot (multi-user packets) and the introduction of QoS flags. All of these were put in place to allow for low latency, low bit rate communications such as VoIP.[9]

The additional forward rates for EV-DO Rev. A are:[10]

In addition to the changes on the forward link, the reverse link was enhanced to support higher complexity modulation (and thus higher bit rates). An optional secondary pilot was added, which is activated by the mobile when it tries to achieve enhanced data rates. To combat reverse link congestion and noise rise, the protocol calls for each mobile to be given an interference allowance which is replenished by the network when the reverse link conditions allow it.[10] The reverse link has a maximum rate of 1.8 Mbit/s, but under normal conditions users experience a rate of approximately 500-1000 kbit/s but with more latency than cable and dsl.

EV-DO Rev. B is a multi-carrier evolution of the Rev. A specification. It maintains the capabilities of EV-DO Rev. A, and provides the following enhancements:

In 2006 Ultra Mobile Broadband was announced as the brand name for the EV-DO Rev. C standard.[11] These ended up being two separate standards.

Ultra Mobile Broadband (UMB) was proposed by Qualcomm as the natural evolution path for CDMA2000.

In November 2008, Qualcomm, UMB's lead sponsor, announced it was ending development of the technology. This followed the announcement that most CDMA carriers chose to adopt the competing 3GPP Long Term Evolution (LTE) standard.[14]