From Infogalactic: the planetary knowledge core
Jump to: navigation, search
Not to be confused with XL Center or Xcel Energy Center.

ExCeL London (Exhibition Centre London) (often referred to as the ExCeL Exhibition Centre) is an exhibitions and international convention centre in the London Borough of Newham.[3] It is located on a 100-acre (0.40 km2) site on the northern quay of the Royal Victoria Dock in London Docklands, between Canary Wharf and London City Airport. The ICC Auditorium also hosted Miss World 2014 on December 14, 2014. 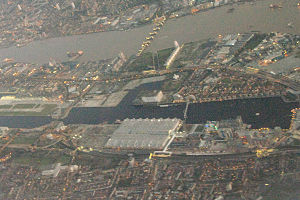 The centre was built by Sir Robert McAlpine and first opened in November 2000. In May 2008, it was acquired by Abu Dhabi National Exhibitions Company. Phase II was completed on 1 May 2010. This expansion created The International Convention Centre London (ICC London) adding to ExCeL's event space, as well as further meeting space and banqueting facilities.

The Royal Victoria Dock closed to commercial traffic in 1981, but it is still accessible to shipping. The centre's waterfront location allows visiting vessels to moor alongside the centre (for example, the 2005 London Boat Show was visited by HMS Sutherland).

The exhibition building itself consists of two column-free, rectangular, subdividable halls of approximately 479,493 square feet (approximately 44,546 m²) each, on either side of a central boulevard containing catering facilities and information points. There are also three sets of function rooms, one overlooking the water, another above the western end of the central boulevard, and the third on the north side of the building. These are used for smaller meetings, seminars, presentations, and corporate hospitality. There are six hotels, more than 30 bars and restaurants, plus 3,700 parking spaces on the campus. 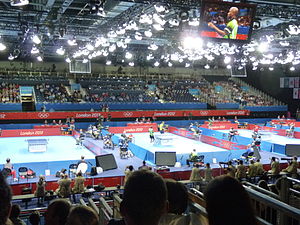 For the 2012 Summer Olympics,[6] ExCeL London was divided into five sports halls with capacities ranging from 4,000 to 6,000 that were used for boxing, fencing, judo, taekwondo, table tennis, weightlifting, and wrestling. Previous sporting events which have taken place at ExCeL London include: 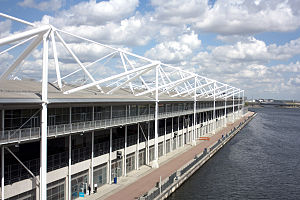 ExCeL London is due to be the hosting venue for IPEX 2018, the largest English-speaking global technology event for print publishing and media.[8]

ExCeL London is served by two Docklands Light Railway (DLR) stations. The main western entrance is directly linked to Custom House for ExCeL station and the eastern entrance is connected to Prince Regent station. During major shows with large visitor attendances, extra shuttle trains are run between the venue and Canning Town station, with interchange at Canning Town station to London Underground's Jubilee line. ExCeL London is located near London City Airport station. The DLR and a number of dual-carriageway roads connect the centre to the airport and the important nearby office-and-commercial district of Canary Wharf. Since June 2012, the Emirates Air Line cable car now links ExCeL to The O2 on the Greenwich Peninsula.