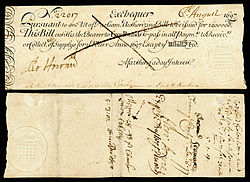 The Exchequer is a government department of the United Kingdom probably originating in the Anglo-Saxon period lasting until 1834, responsible for the management and collection of taxation and other government revenues. The historical Exchequer developed judicial roles. A similar office existed in Ireland during British rule from 1299 to 1877.

The Exchequer was named after a table used to perform calculations for taxes and goods in the medieval period. According to the Dialogue concerning the Exchequer,[1] an early medieval work describing the practice of the Exchequer. The table was large, 10 feet by 5 feet with a raised edge or "lip" on all sides of about the height of four fingers to ensure that nothing fell off it, upon which counters were placed representing various values. The name Exchequer referred to the resemblance of the table to a chess board (French: échiquier) as it was covered by a black cloth bearing green stripes of about the breadth of a human hand, in a chequer-pattern. The spaces represented pounds, shillings and pence.[1]

The term "Exchequer" then came to refer to the twice yearly meetings held at Easter and Michaelmas, at which government financial business was transacted and an audit held of sheriffs' returns.[citation needed]

History of the Exchequer in England and Wales

It is unknown when the Exchequer was established. The earliest surviving records known as the Pipe Rolls, the results of the exchequer's audit, are from 1129–30 under Henry I and show continuity from previous years. Some historians date the beginning of Royal financial record keeping in the Anglo-Saxon period.[2]:149

Under Henry I, the procedure adopted for the audit involved the Treasurer drawing up a summons to be sent to each Sheriff, which he was required to answer. The Treasurer called on each Sheriff to give an account of the income in his shire due from royal demesne lands and from the county farm. The Chancellor of the Exchequer then questioned him concerning debts owed by private individuals.[3]:73–74

At an early stage in England certainly by 1176, the 23rd year of the Reign of Henry II which is the date of the Dialogue concerning the Exchequer,[1] the Exchequer was split into two components: the purely administrative Exchequer of Receipt, which collected revenue, and the judicial Exchequer of Pleas, a court concerned with the King's revenue. Following the proclamation of the Magna Charta, legislation was enacted whereby the Exchequer was charged with maintaining the realm's prototypes for the yard and pound. These nominal standards were, however, only infrequently enforced on the localities around the kingdom.

In the 1600s the goldsmiths used to deposit their reserve of treasure in the Exchequer, sanctioned by the government. Charles II "shut up" the Exchequer in what Walter Bagehot described as "one of those monstrous frauds... this monstrous robbery". This ruined the goldsmiths and the credit of the Stuart Government, which never recovered of it. In 1694, the credit of William III of England's government was so low in London, that it was impossible for it to borrow, which led to the foundation of the Governor and Company of the Bank of England.[4]

The records of the Exchequer were kept in the "Pell Office", adjacent to Westminster Hall, until the 19th century, . The office was so named after the skins (then "pells" or pelts) from which the rolls were made.[5]

The Exchequer became unnecessary as a revenue collecting department because of the reforms of England's first Prime Minister, William Pitt, who served as Chancellor of the Exchequer. It was abolished in 1834.[citation needed] The government departments collecting revenue paid it directly to the Bank of England. Its metrological responsibilities were devolved to the Standards Department of the Board of Trade in 1866.[citation needed]

By extension, "exchequer" has come to mean the Treasury and, colloquially, pecuniary possessions in general; as in "the company's exchequer is low".[citation needed]

History of the Exchequer in Scotland

The Scottish Exchequer dates back to around 1200 and had a similar role of auditing and deciding on royal revenues as in England. The Scottish Exchequer was slower to develop a separate judicial role; and it was not until 1584 that it became a Court of Law, separate from the King's council. Even then, the judicial and the administrative roles never became completely separated into two bodies, as with the English Exchequer.

The term Court of Exchequer (Scotland) was used of the Exchequer department only during the Scottish administration of Oliver Cromwell, between 1655 and 1659.

In 1707, the Exchequer Court (Scotland) Act 1707 (6 Ann. c. 53) reconstituted the Exchequer into a court on the English model with a Lord Chief Baron and four Barons. The court adopted English forms of procedure and had further powers added to it.

Exchequer of Ireland developed in 1210 with John of England imposing English law. It consisted of the Superior Exchequer, a court of equity and revenue akin to the Exchequer of Pleas, and the Inferior Exchequer. The latter were the treasurers who handled all logistics from collecting the money (Teller or Cashier), logging it (Clerk of the Pells) and signing money orders accepting or paying money.