The Exclusion Crisis ran from 1679 through 1681 in the reign of King Charles II of England, Scotland and Ireland. The Exclusion Bill sought to exclude the King's brother and heir presumptive, James, Duke of York, from the thrones of England, Scotland and Ireland because he was Roman Catholic. The Tories were opposed to this exclusion while the "Country Party", who were soon to be called the Whigs, supported it. 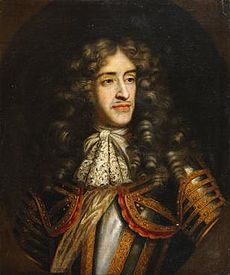 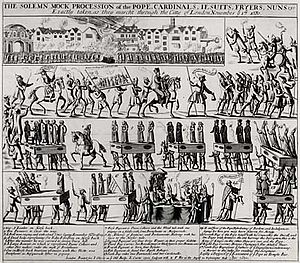 Engraving showing "A Solemn Mock Procession of the Pope" held in London on 17 November 1680. The Whigs arranged to have effigies of the Pope, cardinals, friars, and nuns paraded through the streets of London and then burned in a large bonfire.

In 1673, when he refused to take the oath prescribed by the new Test Act, it became publicly known that the Duke of York was a Roman Catholic. His secretary, Edward Colman, had been named by Titus Oates during the Popish Plot (1678) as a conspirator to subvert the kingdom. Members of the Anglican English establishment could see that in France a Catholic king was ruling in an absolutist way, and a movement gathered strength to avoid such a form of monarchy from developing in England, as many feared it would if James were to succeed his brother Charles, who had no legitimate children. Sir Henry Capel summarised the general feeling of the country when he said in a parliamentary debate in the House of Commons of England on 27 April 1679:

From popery came the notion of a standing army and arbitrary power... Formerly the crown of Spain, and now France, supports this root of popery amongst us; but lay popery flat, and there's an end of arbitrary government and power. It is a mere chimera, or notion, without popery.[1]

The occasion which brought these sentiments to a head was the impeachment of Thomas Osborne, Earl of Danby, as a scapegoat for a scandal by which Louis XIV bought the neutrality of Charles's government with an outright bribe. Charles dissolved the Cavalier Parliament, but the new Parliament which assembled on 6 March 1679 was even more hostile to the king and to his unfortunate minister, thus Danby was committed to the Tower of London. 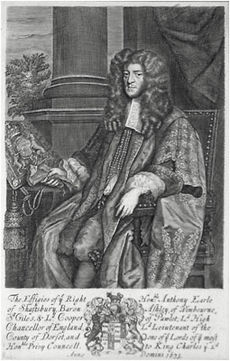 The Earl of Shaftesbury, the leader of the Whigs who introduced the Exclusion Bill in the House of Commons on 15 May 1679.

On 15 May 1679, the supporters of Anthony Ashley Cooper, 1st Earl of Shaftesbury, introduced the Exclusion bill in the Commons with the intention of excluding James from the succession to the throne. A fringe group there began to support the claim to the throne of Charles's illegitimate – but Protestant – son, the Duke of Monmouth. As it seemed likely that the bill would pass in the House of Commons, Charles exercised his royal prerogative to dissolve Parliament. Successive Parliaments attempted to pass such a bill, and were likewise dissolved. The "Petitioners", those who backed a series of petitions to Charles to call Parliament together to complete the passage of the Exclusion Bill, became known as the Whigs, while the Court party, or the "Abhorrers" in the political cant of the hour, meaning those who found the Exclusion Bill abhorrent, would develop into the Tories.

Shaftesbury's party, beginning to be known as the Whigs, involved the whole country in a mass movement, primarily by keeping alive the fears raised by the Popish Plot. Every November, on the anniversary of Elizabeth I's accession, they organised huge processions in London in which the Pope was burnt in effigy. The King's supporters (the Tories) were able to muster their own propaganda in the form of memories of the tyrannical regime of the Commonwealth government of Oliver Cromwell and its many austerities. Despite two failed attempts to reestablish Parliament and pass the bill, the King succeeded in labelling the Whigs as subversives and as closet nonconformists. By 1681, in the course of the Exclusion Bill Parliament, the mass movement had died down, and the bill was defeated when it was sent to the House of Lords.