Exeter Cathedral, formally known as the Cathedral Church of Saint Peter at Exeter, is an Anglican cathedral, and the seat of the Bishop of Exeter, in the city of Exeter, Devon, in South West England.

The present building was complete by about 1400, and has several notable features, including an early set of misericords, an astronomical clock and the longest uninterrupted vaulted ceiling in England.

The founding of the cathedral at Exeter, dedicated to Saint Peter, dates from 1050, when the seat of the bishop of Devon and Cornwall was transferred from Crediton because of a fear of sea-raids. A Saxon minster already existing within the town (and dedicated to Saint Mary and Saint Peter) was used by Leofric as his seat, but services were often held out of doors, close to the site of the present cathedral building.

In 1107 William Warelwast, a nephew of William the Conqueror, was appointed to the see, and this was the catalyst for the building of a new cathedral in the Norman style. Its official foundation was in 1133, during Warelwast's time, but it took many more years to complete.[1] Following the appointment of Walter Bronescombe as bishop in 1258, the building was already recognized as outmoded, and it was rebuilt in the Decorated Gothic style, following the example of nearby Salisbury. However, much of the Norman building was kept, including the two massive square towers and part of the walls. It was constructed entirely of local stone, including Purbeck Marble. The new cathedral was complete by about 1400, apart from the addition of the chapter house and chantry chapels.

Like most English cathedrals, Exeter suffered during the Dissolution of the Monasteries, but not as much as it would have done had it been a monastic foundation. Further damage was done during the English Civil War, when the cloisters were destroyed. Following the restoration of Charles II, a new pipe organ was built in the cathedral by John Loosemore. Charles II's sister Henrietta Anne of England was baptised here in 1644. During the Victorian era, some refurbishment was carried out by George Gilbert Scott.

As a boy, The composer Matthew Locke was trained in the choir of Exeter Cathedral, under Edward Gibbons, the brother of Orlando Gibbons. His name can be found scribed into the stone organ 'screen'.

On 4 May 1942 an early-morning air raid took place over Exeter. The cathedral sustained a direct hit by a large high-explosive bomb on the chapel of St James, completely demolishing it. The muniment room above, three bays of the aisle and two flying buttresses were also destroyed in the blast. The medieval wooden screen opposite the chapel was smashed into many pieces by the blast, but it has been reconstructed and restored.[2] Many of the cathedral's most important artifacts, such as the ancient glass (including the great east window), the misericords, the bishop's throne, the Exeter Book, the ancient charters (of King Athelstan and Edward the Confessor) and other precious documents from the library had been removed in anticipation of such an attack. The precious effigy of Walter Branscombe had been protected by sand bags.[3] Subsequent repairs and the clearance of the area around the western end of the building uncovered portions of earlier structures, including remains of the Roman city and of the original Norman cathedral. 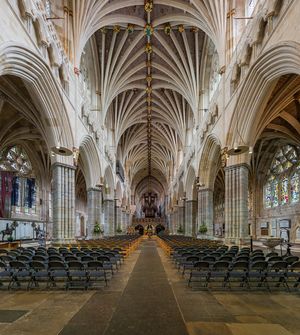 The interior of Exeter Cathedral looking east toward the organ 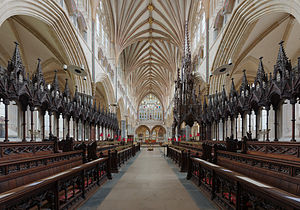 The quire looking east toward the Lady Chapel

The 18 m (59 ft) high bishop's throne in the quire was made from Devon oak between 1312 and 1316; the nearby choir stalls were made by George Gilbert Scott in the 1870s. The east window contains much 14th-century glass, and there are over 400 ceiling bosses, one of which depicts the murder of Thomas Becket. The bosses can be seen at the peak of the vaulted ceiling, joining the ribs together.[5] Because there is no centre tower, Exeter Cathedral has the longest uninterrupted medieval vaulted ceiling in the world, at about 96 m (315 ft).[2] 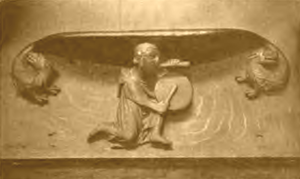 One of the misericords, depicting a pipe and tabor player

The fifty misericords are the earliest complete set in the United Kingdom.[6] They date from two periods: 1220–1230 and 1250–1260. Amongst other things, they depict the earliest known wooden representation of an elephant in the UK. Also, unusually for misericords of this period,[citation needed] they have supporters.

The minstrels' gallery in the nave dates to around 1360 and is unique in English cathedrals. Its front is decorated with 12 carved and painted angels playing medieval musical instruments, including the cittern, bagpipe, hautboy, crwth, harp, trumpet, organ, guitar, tambourine and cymbals, with two others which are uncertain.[7] 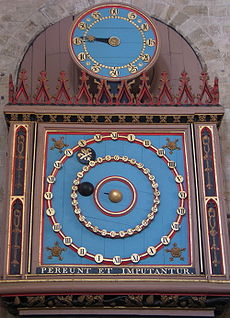 The Exeter Cathedral Astronomical Clock is one of the group of famous 14th- to 16th-century astronomical clocks to be found in the West of England. Others are at Wells, Ottery St Mary, and Wimborne Minster.

The main, lower, dial is the oldest part of the clock, dating from 1484.[2] The fleur-de-lys 'hand' indicates the time (and the position of the sun in the sky) on a 24-hour analogue dial. The numbering consists of two sets of I-XII Roman numerals. The silver ball and inner dial shows both the age of the moon and its phase (using a rotating black shield to indicate the moon's phase). The upper dial, added in 1760, shows the minutes.[2]

The Latin phrase Pereunt et Imputantur, a favourite motto for clocks and sundials, was written by the Latin poet Martial. It is usually translated as "they perish and are reckoned to our account", referring to the hours that we spend, wisely or not. The original clockwork mechanism, much modified, repaired, and neglected until it was replaced in the early 20th century, can be seen on the floor below. The door below the clock has a round hole near its base. This was cut in the early 17th century to allow entry for the bishop's cat to deter vermin that were attracted to the animal fat used to lubricate the clock mechanism.[2]

Si quis illum inde abstulerit eterne subiaceat maledictioni. Fiat. Fiat.
(If any one removes this he shall be eternally cursed. So be it! So be it!)

The library began during the episcopate of Leofric (1050–72) who presented the cathedral with 66 books, only one of which remains in the library: this is the Exeter Book (Exeter Cathedral Library MS 3501) of Anglo-Saxon poetry.[9] 16 others have survived and are in the British Library, the Bodleian Library or Cambridge University Library. A 10th-century manuscript of Hrabanus Maurus's De Computo and Isidore of Seville's De Natura Rerum may have belonged to Leofric also but the earliest record of it is in an inventory of 1327. The inventory was compiled by the Sub-Dean, William de Braileghe, and 230 titles were listed. Service books were not included and a note at the end mentions many other books in French, English and Latin which were then considered worthless. In 1412-13 a new lectrinum was fitted out for the books by two carpenters working for 40 weeks. Those books in need of repair were repaired and some were fitted with chains. The catalogue compiled in 1506 shows that the library furnished some 90 years earlier had 11 desks for books. The most beautiful manuscript in the library is a Psalter (MS. 3508) probably written for the Church of St Helen at Worcester in the early 13th century).[10]

The earliest printed book in the library is represented by only a single leaf: this is Cicero's De officiis (Mainz: Fust and Schoeffer, 1465–66).[10] There is a good collection of early medical books, part of which came in 1948 from the Exeter Medical Library (founded 1814), and part on permanent loan from the Royal Devon and Exeter Hospital (1300 volumes, 1965). A catalogue of the cathedral's books made in 1506 records over 530 titles, of which more than a third are service books.[10] In 1566 the Dean and Chapter presented to Archbishop Matthew Parker a manuscript of the Anglo-Saxon Gospels which had been given by Leofric;[11] in 1602 81 manuscripts from the library were presented to Sir Thomas Bodley for the Bodleian Library at Oxford. In 1657 under the Commonwealth the Cathedral was deprived of several of its ancillary buildings, including the reading room of 1412-13. Some books were lost but a large part of them were saved due to the efforts of Dr Robert Vilvaine, who had them transferred to St John's Hospital. At a later date he provided funds to convert the Lady chapel into a library, and the books were brought back. By 1752 it is thought the collection had grown considerably to some 5,000 volumes, to a large extent by benefactions. In 1761 Charles Lyttelton, Dean of Exeter, describes it as having over 6,000 books and some good manuscripts. He describes the work which has been done to repair and list the contents of the manuscripts. At the same time the muniments and records had been cleaned and moved to a suitable muniment room.[10]

In 1820 the library was moved from the Lady Chapel to the Chapter House. In the later 19th century two large collections were received by the Cathedral, and it was necessary to construct a new building to accommodate the whole library. The collections of Edward Charles Harington and Frederic Charles Cook were together more than twice the size of the existing library, and John Loughborough Pearson was the architect of the new building on the site of the old cloister. During the 20th century the greater part of the library was transferred to rooms in the Bishop's Palace, while the remainder was kept in Pearson's cloister library.[10] 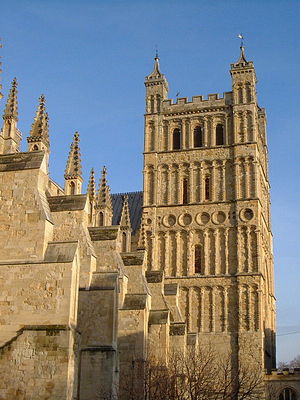 The South Tower - This is where the 12 bells hang.

Both of the Cathedral's towers contain bells. The North Tower contains an 80cwt Bourdon Bell, called Peter. Peter used to swing but it is now only chimed.[12] The South Tower contains the second heaviest peal of 12 bells hung for change ringing in the world, with a tenor weighing 72-2-2 (3684 kg).[13] There is also two semitone bells in addition to the peal of 12.[14]

It is recorded in an 11th-century missal that King Athelstan had brought together a great collection of holy relics at Exeter Cathedral; sending out emissaries at great expense to the continent to acquire them. Amongst these items were a little of the bush in which the Lord spoke to Moses, and a bit of the candle which the angel of the Lord lit in Christ's tomb.[19]

According to the semi-legendary tale, Agnes Prest, during her brief time of liberty in Exeter before her execution in 1557, met a stonemason repairing the statues at the Cathedral. She stated that there was no use repairing their noses, since "within a few days shall all lose their heads".[20] There is a memorial to her and another Protestant martyr, Thomas Benet, in the Livery Dole area of Exeter. The memorial was designed by Harry Hems and raised by public subscription in 1909.[21]

The tube web spider Segestria florentina, notable for its iridescent shiny green fangs, can be found within the outer walls. The walls are made of calcareous stone, which decays from acidic pollution, to form cracks and crevices which the spider and other invertebrates inhabit.[22] 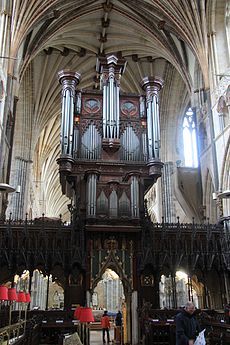 The Cathedral organ stands on the ornate medieval screen, preserving the old classical distinction between quire and nave. The first organ was built by John Loosemore in 1665. There was a radical rebuild by Henry Willis in 1891, and again by Harrison & Harrison in 1931.[24] The largest pipes, the lower octave of the 32 ft Contra Violone, stand just inside the south transept. The organ has one of only three trompette militaire stops in the country (the others are in Liverpool Cathedral and London's St Paul's Cathedral), housed in the minstrels' gallery, along with a chorus of diapason pipes.[23]

In January 2013 an extensive refurbishment began on the organ, undertaken by Harrison and Harrison. The work consisted of an overhaul and a re-design of the internal layout of the soundboards and ranks of the organ pipes.[25] In October 2014 the work was completed and the organ was re-assembled, save for the final voicing and tuning of the new instrument.[26]