The college is located on Turl Street, where it was originally founded in 1314 by Devon-born Walter de Stapledon, Bishop of Exeter, as a school to educate clergymen. From its foundation Exeter was popular with the sons of the Devonshire gentry and has been associated with a number of notable people, including the writer J. R. R. Tolkien. 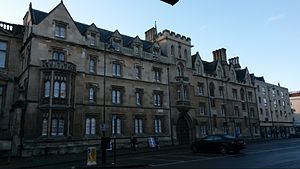 Still situated in its original location in Turl Street, Exeter College was founded in 1314 by Walter de Stapledon of Devon, Bishop of Exeter and later treasurer to Edward II, as a school to educate clergy. During its first century, it was known as Stapeldon Hall and was significantly smaller, with just twelve to fourteen students. The college grew significantly from the 15th century onward, and began offering rooms to its students. The College motto is "Floreat Exon.", meaning "Let Exeter Flourish".

In the 16th century, donations from Sir William Petre (whose daughter Dorothy Wadham (1534–1618) co-founded Wadham College, Oxford), assumed to be an Exeter graduate, helped to expand and transform the college. Sir John Acland (d.1620), a Devonshire gentleman, donated £800 which largely financed the building of a new dining hall, and also established two scholarships for poor students, the first to be created at the college.[3] In a clever move by the bursar to fill the new buildings as they were completed, a significant number of noble Roman Catholic students were invited to enrol and take classes at the enlarged college; however, they were not allowed to matriculate. As a result, over time, Exeter College became one of the leading colleges in the University.

In the 18th century the college experienced declining popularity, as did all of Oxford's other colleges. University reforms in the 1850s helped to end this period of stagnation.

Until 1979 the college did not allow women students, but in 1993 Exeter College became the first of the former all-male colleges to elect a woman, Marilyn Butler, as its Rector. When Butler's tenure expired in October 2004, the college elected another woman – Frances Cairncross, former Senior Editor of The Economist – as Rector. 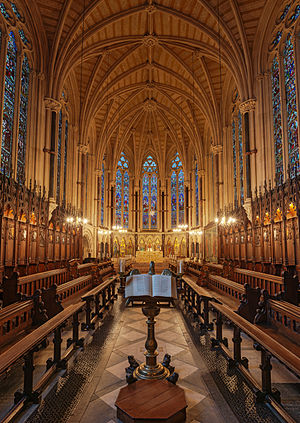 Exeter College is the real-life basis for the fictional Jordan College in Philip Pullman's novel trilogy His Dark Materials. The 2007 film version of the first novel, The Golden Compass (originally Northern Lights), used the college for location filming.[5]

The Front Quadrangle sits on roughly the site of the medieval college, although of the earliest buildings, only Palmer's Tower in the north-eastern corner remains. Constructed in 1492, the tower, which was once the primary entrance to the College, now houses various offices and lodgings for Fellows, and at its base is a memorial to Members who were killed in the Second World War. The Quadrangle is dominated by the chapel, designed by Sir George Gilbert Scott and constructed in 1854–60, which was heavily inspired by the Sainte-Chapelle in Paris. On the opposite side stands the Hall, constructed in 1618, notable for its vaulted ceilings and numerous fine portraits, underneath which is the College bar. Building work over the following century resulted in the Quadrangle taking on its current appearance in 1710.

The Front Quadrangle also houses the Junior, Middle and Senior Common Rooms, as well as lodgings for Fellows and undergraduates.

The Margary Quadrangle was completed in 1964 with the construction of the Thomas Wood building to commemorate the 650th anniversary of the College, although the Quadrangle also incorporates a number of buildings that were constructed prior to this date. The Rector's Lodgings were designed by Gilbert Scott and constructed in 1864, with staircases nine, ten and eleven also being erected during the 19th century.

A passageway from the Front Quadrangle leads through to the College's Fellows' Garden, in which stands the library, designed by Gilbert Scott in the 13th century style. The area is also bounded on the left hand side by Convocation House, the Divinity School and the Bodleian Library, and on the right by Brasenose Lane. The Mound, situated at the end of the Garden, offers views over Radcliffe Square, including All Souls College and the Radcliffe Camera.

In 2007–08, the College purchased the main site of Ruskin College on nearby Walton Street for £7 million. It will be refurbished as a third city centre quadrangle.[6] 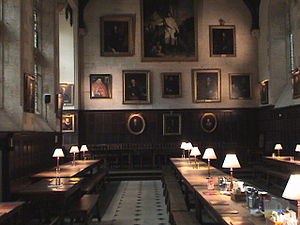 As one of the smaller Oxford Colleges, Exeter has a reputation for having a close-knit student body. First year undergraduates are housed on-site in the College’s Turl St. site, and there is dedicated Graduate accommodation for the college on Iffley Road.

As the university’s fourth oldest college, a certain emphasis is placed on tradition, especially during special occasions such as the annual Burns Night, a dinner in honour of the Scottish poet Robert Burns, when a traditional meal of haggis is served. The College’s ties with Williams College in the United States, as well as the generally international composition of the MCR makes the annual Thanksgiving dinner a popular occasion.[7][8]

Exeter has a mixed-voice choir, made up of 24 singers, which is administered, conducted and accompanied solely by the Undergraduate Organ Scholars. It is the only College in either Oxford or Cambridge where a choir, run entirely by the Organ Scholar, sings three services a week, and has been heard recently on a number of broadcasts for BBC Radio 4's The Daily Service. The college offers Choral and Parry–Wood Organ Scholarships, and former Organ Scholars include Robert Sharpe (Director of Music, York Minster), Christopher Herrick (International Concert Organist and former Organist, Westminster Abbey), and David Trendell (Director of Music, King's College London), as well as the current Directors of Music at Rugby, Charterhouse, Sherborne, and Latymer Upper Schools.[citation needed] 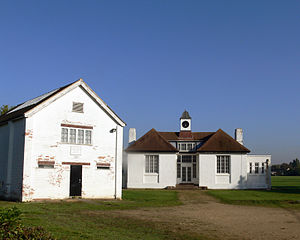 Exeter students compete at a University level on the varsity teams and the college itself fields several teams on an intra-university college level, particularly in rowing, rugby, hockey, netball and cricket.

In March 2014 Exeter College Association Football Club defeated St Catherine's College 2-1 in the final of the Cuppers tournament to lift the trophy for the first time in over 40 years.[9]

Unusually for an Oxford college, Exeter boasts a dedicated Careers Office and internship programme, with links to a wide range of companies around the globe. The college’s Development Office works not only to help fund the college but also to provide networking opportunities for students through its alumni contacts, and through its annual ‘City Drinks.’[citation needed]

Amongst Exeter's alumni are many writers, including J. R. R. Tolkien, Martin Amis and Philip Pullman; Roger Bannister, the first man to run a mile in under four minutes; the actors Richard Burton and Imogen Stubbs; Liaquat Ali Khan, the first prime minister of Pakistan, John Kufuor, the former President of Ghana.