Expedition of the Thousand

The Expedition of the Thousand (Italian Spedizione dei Mille) was an event of the Italian Risorgimento that took place in 1860. A corps of volunteers led by Giuseppe Garibaldi landed in Sicily in order to conquer the Kingdom of the Two Sicilies, ruled by the Bourbons.

The project was an ambitious and risky venture aiming to conquer, with a thousand men, a kingdom with a larger regular army and a more powerful navy. The expedition was a success and concluded with a plebiscite that brought Naples and Sicily into the Kingdom of Sardinia, the last territorial conquest before the creation of the Kingdom of Italy on 17 March 1861.

The sea venture was the only desired action that was jointly decided by the "four fathers of the nation" Giuseppe Mazzini, Giuseppe Garibaldi, Victor Emmanuel II, and Camillo Cavour, pursuing divergent goals. However, the Expedition was instigated by Francesco Crispi, that utilized his political influences to succeeded the Italian unification's project.[1]

The expedition also brings new large collective ambiguity and misunderstanding: for Garibaldi, it is to achieve a united Italy; to the Sicilian bourgeoisie, an independent Sicily as part of the kingdom of Italy, and for the mass farmers, the end of oppression and land distribution.

The events of the Expedition took place within the overall process of the unification of Italy, which was largely orchestrated by Camillo Cavour, Prime Minister of Sardinia-Piedmont, as his life's work. After the annexation of the Grand Duchy of Tuscany, the Duchies of Modena and Parma and the Romagna to Piedmont in March 1860, Italian nationalists set their sights on the Kingdom of the Two Sicilies, which comprised all of southern mainland Italy and Sicily, as the next step toward their dream of unification of all Italian lands.

In 1860 Garibaldi, already the most famous Italian revolutionary leader, was in Genoa planning an expedition against Sicily and Naples, with the covert support of the United Kingdom.[2] Sicilian leaders, among them Francesco Crispi, were discontented with Neapolitan rule over the island..[citation needed] Moreover, Britain was worried by the approaches of the Neapolitans towards the Russian Empire in the latter's attempt to open its way to the Mediterranean Sea; the strategic importance of the Sicilian ports was also to be dramatically increased by the opening of the Suez Canal.[citation needed] It has been also suggested (by Lorenzo del Boca, among the others) that British support for Garibaldi's expedition was spurred by the necessity to obtain more favourable economic conditions for Sicilian sulfur, which was needed in great quantities for the new steamers.[3]

The search for a casus belli

The Kingdom of Sardinia-Piedmont needed a presentable casus belli in order to attack the Kingdom of the Two Sicilies. This was needed for the House of Savoy, which however never gave any declaration of war against the Bourbon kingdom, a necessary condition, since this was among the requirements presented to Cavour. The only occurrence that would have satisfied this requirement was an uprising from within. Such an event would have felt the alienation of the people to the dynasty that ruled in Naples and, particularly, the inability of Francis of Bourbon, to ensure, in forms acceptable public policy in their domains. Sicily, as shown by the history of the past decades, was fertile ground, and the liberal south, especially those returning after an amnesty granted by the young King, who worked in this direction for some time.[4][5] 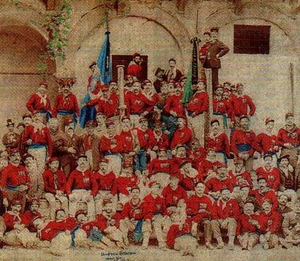 Red Shirt volunteers of the Thousand from Brescia, Lombardy (1860) 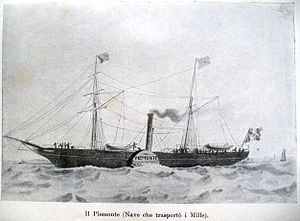 In March 1860, exile Rosolino Pilo exhorted Giuseppe Garibaldi to take charge of an expedition to liberate Southern Italy from Bourbon rule.[6] At first, Garibaldi was against it, but eventually agreed.[6] By May 1860, Garibaldi had collected 1,089 volunteers for his expedition to Sicily.[7]

The 1,089 volunteers were poorly armed with dated muskets[7] and were dressed in a minimalist uniform - consisting of a red shirt and grey trousers.[13]

During the night of 5 May, a small group led by Nino Bixio seized two steamships in Genoa from the Rubattino shipping company in order to transport the volunteers to Sicily. They took the two ships, which they had renamed Il Piemonte and Il Lombardo, to the nearby rocks at Quarto, where the volunteers (including Franceso Crispi's wife, Rosalie) embarked for Sicily.[8] 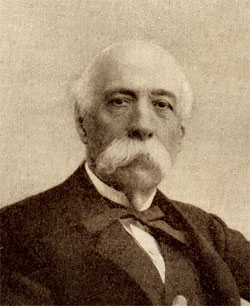 The ships landed at Marsala, on the westernmost point of Sicily, on 11 May, with the help of British ships present in the harbour to deter the Bourbon ships.[14] The Lombardo was attacked and sunk only after the disembarkation had been completed, while the Piemonte was captured. The landing had been preceded by the arrival of Francesco Crispi and others, who had the task of gaining the support of the locals for the volunteers.

On 14 May, at Salemi, Garibaldi announced that he was assuming dictatorship over Sicily in the name of King Victor Emmanuel II of Sardinia.

The Mille won a first battle at Calatafimi against around 2,000 Neapolitan troops on 15 May. The battle boosted the morale of the Mille and, at the same time, depressed the Neapolitans, who were poorly led by their often corrupted higher officers, and started to feel themselves abandoned. In the meantime the ranks of the Mille enlarged to 1,200 with local men joining. On 27 May, with the help of a popular insurrection, the Mille laid siege to Palermo, the island's capital. The city was defended by some 16,000 men, but these were under the confused and timid direction of general Ferdinando Lanza, aged 75 (probably one of the Neapolitan officers bribed with English money[citation needed], see Evaluation section).

While two columns of Garibaldines attacked the perimeter, part of the population, strengthened by 2,000 prisoners liberated from the local jails, rose against the garrison. When his troops were driven back from most of their positions, Lanza ordered them to bombard the city for three days, causing the deaths of 600 civilians. By 28 May Garibaldi controlled much of the city and declared the Bourbon authority deposed. The following day a desperate Neapolitan counteroffensive was driven back, and Lanza asked for a truce. However, when a reinforcement party of well equipped and well trained troops arrived in the city, the situation became very serious for Garibaldi, who was saved only by Lanza's decision to surrender. Through the mediation of a British admiral, an armistice was signed and the Neapolitan fleet abandoned the port.

Neapolitan retreat and Battle of Milazzo 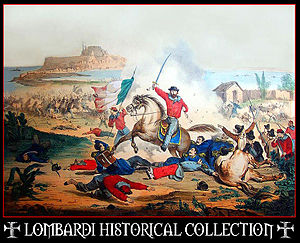 Lithograph of Garibaldi and his Red Shirts at the Battle of Milazzo.

The Bourbon troops were ordered to push eastwards and evacuate the island. An insurrection that had broken out in Catania on 31 May, led by Nicola Fabrizi, was crushed by the local garrison, but the order to leave for Messina meant that this Neapolitan tactical success would have no practical results.

At the time only Syracuse, Augusta, Milazzo and Messina remained in royal hands in Sicily. In the meantime Garibaldi issued his first law. A levy failed to muster more than 20,000 troops, while the peasants, who hoped to an immediate relief from the grievous conditions to which they were forced by the landowners, revolted in several localities. At Bronte, on 4 August 1860, Garibaldi's friend Nino Bixio bloodily repressed one of these revolts with two battalions of Redshirts.

The pace of Garibaldi's victories had worried Cavour, who in early July sent him a proposal of immediate annexation of Sicily to Piedmont. Garibaldi, however, refused vehemently to allow such a move until the end of the war. Cavour's envoy, La Farina, was arrested and expelled from the island. He was replaced by the more malleable Agostino Depretis, who gained Garibaldi's trust and was appointed as pro-dictator.

On 25 June 1860, King Francis II of the Two Sicilies had issued a constitution. However, this late attempt to conciliate his moderate subjects failed to rouse them to defend the regime, while liberals and revolutionaries were eager to welcome Garibaldi.

At the time, Garibaldi had created the Esercito Meridionale ("Southern Army"), reinforced by other volunteers from Italy and some regular Piedmontese soldiers disguised as "deserters". The Neapolitans had mustered some 24,000 men for the defence of Messina and the other fortresses.

On 20 July Garibaldi attacked Milazzo with 5,000 men. The Neapolitan defence was gallant, but again the absence of coordination and the refusal of Marshal Clary, commander-in-chief of the army in the island, to send reinforcements from Messina granted the Mille another victory. Six days later Clary surrendered the city of Messina to Garibaldi, leaving only 4,000 in the citadel and other forts. The other strongholds surrendered by the end of September.

Landing and conquest in Calabria

On 19 August Garibaldi's men disembarked in Calabria, a move opposed by Cavour, who had written the Dictator a letter urging him to not cross the strait. Garibaldi, however, disobeyed, an act which had the silent approval of King Victor Emmanuel.

The Bourbons had some 20,000 men in Calabria, but, apart from some episodes like that of Reggio Calabria, which was conquered at high cost by Bixio on 21 August, they offered insignificant resistance, as numerous units of the Bourbon army disbanded spontaneously or even joined Garibaldi's ranks. On 30 August a conspicuous Sicilian army, led by general Ghio, was officially disbanded at Soveria Mannelli, while only minor and dispersed units continued the fight. The Neapolitan fleet behaved in a similar way.

King Francis II was thus forced to abandon Naples and entrench himself in the formidable fortress of Gaeta, while a last stand was set up on the Volturno river, north of Naples. On 7 September Garibaldi took possession of Naples with little harm (he entered the city by train), hailed as a liberator by the population.

In the meantime the Kingdom of Sardinia invaded the Papal States conquering Central Italy (Lazio excluded) through few battles such as the Battle of Castelfidardo, and entered the Kingdom of Two Sicilies joining Giuseppe Garibaldi.

In the decisive Battle of the Volturnus (1 and 2 October[15]), Garibaldi, with a force of 24,000 men, was not able to conclusively defeat the Neapolitan Army (about 25,000 men). Only the arrival of the Sardinian army obliged the last organized Bourbon force to entrench in Gaeta.

A few days later (21 October) a plebiscite confirmed the annexation of the Kingdom of the Two Sicilies to the Kingdom of Sardinia by an overwhelming majority.

The end of the expedition is traditionally set with the famous meeting in Teano[16] (northern Campania) between Victor Emmanuel and Garibaldi (26 October 1860). Others assign instead the end of the campaign to the King's entrance into Naples on 7 November.

However, the military campaign was not yet fully completed, as Francis II held out in Gaeta until February of the next year, when he finally surrendered to the Sardinian army led by Enrico Cialdini, and left for exile in the Papal States. Shortly thereafter, in March 1861, the new Kingdom of Italy (Regno d'Italia) was formally established.

Garibaldi asked the King to remain in the former Two Sicilies for a year as dictator. He also asked that his officers be integrated in the new Italian Army. When Victor Emmanuel refused to accept his requests, he returned to Caprera. 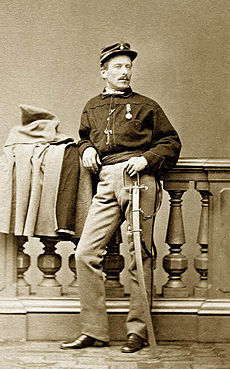 The Expedition of the Thousand has traditionally been one of the most celebrated events of the Italian Risorgimento, the process of the unification of Italy.

In the following years, the rise of local resistance (the so-called brigantaggio or brigandage), required at one point the presence of some 140,000 Piedmontese troops to maintain control of the former Kingdom of the Two Sicilies. Traditionally, the handling of the brigantaggio has received a negative judgement by Italian historians, in strict contrast with the heroism attributed to Garibaldi and his followers; the English historian Denis Mack Smith,[17] for example, points out the deficiencies and reticence of the sources available for the period.

The expedition, moreover, obtained the support of the powerful great landowners of southern Italy in exchange for the promise that their properties be left intact in the upcoming political settlement. Numerous Sicilian peasants, however, had joined the Mille hoping instead for a redistribution of the land to the people working it. The consequences of this misunderstanding became evident at Bronte.