Experimental Breeder Reactor I (EBR-I) is a decommissioned research reactor and U.S. National Historic Landmark located in the desert about 18 miles (29 km) southeast of Arco, Idaho. At 1:50 pm on December 20, 1951, it became the world's first electricity-generating nuclear power plant when it produced sufficient electricity to illuminate four 200-watt light bulbs.[3][4] It subsequently generated sufficient electricity to power its building, and continued to be used for experimental purposes until it was decommissioned in 1964.

As part of the National Reactor Testing Station (now known as the Idaho National Laboratory), EBR-I's construction started in late 1949. The reactor itself was designed by a team led by Walter Zinn at the Argonne National Laboratory. In its early stages, the reactor plant was referred to as Chicago Pile 4 (CP-4) and Zinn's Infernal Pile.[5] Installation of the reactor at EBR-I took place in early 1951 (the first reactor in Idaho) and it began power operation on August 24, 1951. On December 20 of that year, atomic energy was successfully harvested for the first time. The following day, the reactor produced enough power to light the whole building. The power plant produced 200 kW of electricity out of 1.4 MW of heat generated by the reactor.[6] 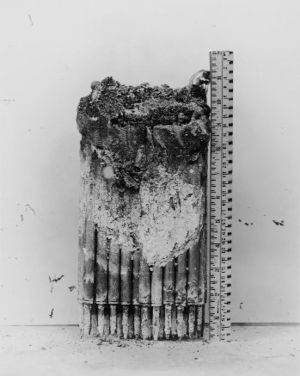 Part of the core after the 1955 partial meltdown

The design purpose of EBR-I was not to produce electricity but instead to validate nuclear physics theory which suggested that a breeder reactor should be possible. In 1953, experiments revealed the reactor was producing additional fuel during fission, thus confirming the hypothesis. However, on November 29, 1955, the reactor at EBR-I suffered a partial meltdown during a coolant flow test. The flow test was trying to determine the cause of unexpected reactor responses to changes in coolant flow. It was subsequently repaired for further experiments, which determined that thermal expansion of the fuel rods and the thick plates supporting the fuel rods was the cause of the unexpected reactor response.[7]

Although EBR-I produced the first electricity available in-house, a nearby reactor plant called BORAX-III was connected to external loads, powering the nearby city of Arco, Idaho in 1955, the first time a city had been powered solely by nuclear power.

Besides generating the world's first electricity from atomic energy, EBR-I was also the world's first breeder reactor and the first to use plutonium fuel to generate electricity (see also the Clementine nuclear reactor). EBR-1's initial purpose was to prove Enrico Fermi's fuel breeding principle, a principle that showed a nuclear reactor producing more fuel atoms than consumed. Along with generating electricity, EBR-1 would also prove this principle.

EBR-I was deactivated in 1964 and replaced with a new reactor, EBR-II. Landmark status for EBR-I was granted by President Lyndon Johnson and Glenn T. Seaborg on August 25, 1966.

The site has been open to the public since 1976, but is only open between Memorial Day and Labor Day. Also on display at the site are two prototype reactors from the Aircraft Nuclear Propulsion Project of the 1950s.