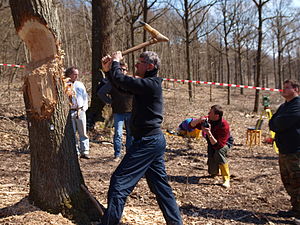 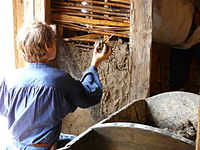 Creating a wall of mud in the Viking style.

Experimental archaeology (also called experiment archaeology and experiential archaeology) is a field of study which attempts to generate and test archaeological hypotheses, usually by replicating or approximating the feasibility of ancient cultures performing various tasks or feats. It employs a number of methods, techniques, analyses, and approaches, based upon archaeological source material such as ancient structures or artifacts.[1]

It is distinct from uses of primitive technology without any concern for archaeological or historical study. Living history and historical reenactment, which are generally undertaken as a hobby, are the non archaeological person's version of this academic discipline.

A good example is Butser Ancient Farm in the English county of Hampshire which is a working replica of an Iron Age farmstead where long-term experiments in prehistoric agriculture, animal husbandry, and manufacturing are held to test ideas posited by archaeologists. In Denmark, the Lejre Experimental Centre carries out even more ambitious work on such diverse topics as artificial Bronze Age and Iron Age burials, prehistoric science and stone tool manufacture in the absence of flint.

Other types of experimental archaeology may involve burying modern replica artifacts and ecofacts for varying lengths of time to analyse the post-depositional effects on them. Other archaeologists have built modern earthworks and measured the effects of silting in the ditches and weathering and subsidence on the banks to understand better how ancient monuments would have looked. One example is Overton Down in England.

The work of flintknappers is also a kind of experimental archaeology as much has been learnt about the many different types of flint tools through the hands-on approach of actually making them. Experimental archaeologists have equipped modern professional butchers, archers and lumberjacks with replica flint tools to judge how effective they would have been for certain tasks. Use wear traces on the modern flint tools are compared to similar traces on archaeological artifacts, making probability hypotheses on the possible kind of use feasible. Hand axes have been shown to be particularly effective at cutting animal meat from the bone and jointing it.

Another field of experimental archaeology is illustrated by the studies of the stone flaking abilities of non- human primates. It has been demonstrated that bonobo ape are able to produce modified cores and flaked stones which are morphologically similar to early lithic industries in East Africa.[6]