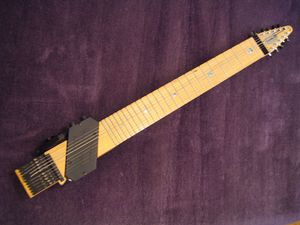 The Gittler guitar is an experimental designed guitar created by Allan Gittler (1928–2003). Gittler realized that sentimental design references to acoustic guitars are unnecessary in an electronically amplified guitar, and designed his instrument with the objective of reducing the electric guitar to the most minimal functional form possible. He made 60 guitars in New York in the mid 1970s to early 1980s.

In the experimental rock and free jazz scenes, many guitar players began modifying their guitars in the tradition of John Cage's prepared piano. Keith Rowe and Fred Frith became known for playing these prepared guitars. The latter also crafted experimental table string instruments. In the early 1980s, Glenn Branca started building his own electric string instruments, called 'mallet guitars', based on the harmonic canons of Harry Partch. Around the same time, Hans Reichel built several 3rd bridge guitars before he invented his daxophone, which he is known for. Bradford Reed developed his Pencilina in the mid 1980s. The Whamola, based on the Washtub bass, was developed in the nineties and became famous largely because it was used by Les Claypool.

In recent years, multi-scale or fanned frets guitars and basses have started to emerge, as manufactured by Novax Guitars, Ormsby Guitars and others. These instruments are supposed to offer an advantage over the classical fixed-scale guitars and basses by providing more freedom in setting the tension of each string at the design and manufacturing phases. This may result in a more uniform tension of the strings, as well as timbre and tonal characteristics differing from the usual fixed-scale instruments.

In the 2000s, Canadian luthier Linda Manzer created the Pikasso guitar, a 42-string guitar with three necks. It was popularized by jazz guitarist Pat Metheny, who used it on the song "Into the Dream" and on several albums. Its name is ostensibly derived from its likeness in appearance to the cubist works of Pablo Picasso. In 2003, the Tritare was created by Samuel Gaudet and Claude Gauthier in Canada. In 2006 Yuri Landman built his Moodswinger for the band Liars and afterwards made a large series of alternate string instruments, such as the Moonlander for Sonic Youth's Lee Ranaldo, the Springtime for Blood Red Shoes and the Tafelberg drum guitar for The Dodos and others. Micachu made a few string instruments of which one is called the 'Chu'. One of the strings of the Chu carries a large series of small rings and sounds like a snare drum when plucked.

Mountain dulcimers have been subject to much experimentation. The instrument was most likely developed in the Appalachian mountains by 19th century Scots-Irish immigrants.[1] In early settlements, the time and materials were not yet available to recreate more familiar instruments such as the fiddle. As the mountain dulcimer has no known precedents, there has been a lot of room for experimentation; many have attempted either hybrids that emulate other instruments common in folk music, or create new designs with an altogether different sound.

Hybrids include the banjo dulcimer, guitar dulcimer and resonator dulcimer. More unique designs are the aquavina (a dulcimer that has an attached water-filled resonator to create a phasing effect[2]) and the dulcitar (a lute like instrument held in a way resembling a guitar, but with the diatonic fretting of a dulcimer)

The bazantar is a five-string double bass with 29 sympathetic and 4 drone strings and has a melodic range of five octaves invented by musician Mark Deutsch.

The Japanese multi-instrumentalist and experimental musical instrument builder Yuichi Onoue developed a hurdy-gurdy, similar to a fretless violin but with only two strings, called the kaisatsuko as well as a deeply scalloped electric guitar for microtonal playing techniques.[3]

As far as multi-stringed tapped instruments are concerned, the most well-known example is probably the Chapman Stick, developed in the early 1970s by Emmett Chapman. The Warr Guitar and the Kelstone (from Belgium) are alternate instruments that also function on the same playing technique, that is tapping on the strings with both hands. The Chapman Stick is tuned in Perfect Fourths and Perfect Fifths. Another example of an original stringed instrument is the creation of composer Ellen Fullman: the long string instrument. The long string instrument is a series of strands stretched over 90 feet that are played by being rubbed with rosin covered hands while the player walks the length of the instrument.[4] Fullman began development of the instrument in 1981.[5] Fullman is not the only person who has built long string instruments. Since 1983, in addition to his work on and about the violin, Jon Rose has been bowing and recording the music of fences worldwide.[6] Paul Panhuysen made large sound installations with groups of long strings.[7]