When the meaning is clear from context, the symbol +∞ is often written simply as ∞.

We often wish to describe the behavior of a function

, as either the argument

or the function value

gets "very big" in some sense. For example, consider the function

The graph of this function has a horizontal asymptote at y = 0. Geometrically, as we move farther and farther to the right along the

-axis, the value of

approaches 0. This limiting behavior is similar to the limit of a function at a real number, except that there is no real number to which

By adjoining the elements

, we allow a formulation of a "limit at infinity" with topological properties similar to those for

To make things completely formal, the Cauchy sequences definition of

allows us to define

as the set of all sequences of rationals which, for any

, from some point on exceed

In measure theory, it is often useful to allow sets which have infinite measure and integrals whose value may be infinite.

Such measures arise naturally out of calculus. For example, in assigning a measure to

that agrees with the usual length of intervals, this measure must be larger than any finite real number. Also, when considering infinite integrals, such as

the value "infinity" arises. Finally, it is often useful to consider the limit of a sequence of functions, such as

. This order has the desirable property that every subset has a supremum and an infimum: it is a complete lattice.

This induces the order topology on

. In this topology, a set

is a neighborhood of

if and only if it contains a set

for some real number

, and analogously for the neighborhoods of

is a compact Hausdorff space homeomorphic to the unit interval

With this topology the specially defined limits for

, and the specially defined concepts of limits equal to

, reduce to the general topological definitions of limits.

The arithmetic operations of

can be partially extended to 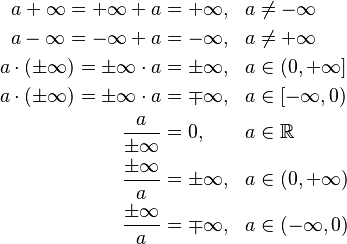 (called indeterminate forms) are usually left undefined. These rules are modeled on the laws for infinite limits. However, in the context of probability or measure theory,

is often defined as

is not defined either as

, because although it is true that whenever

for a continuous function

it must be the case that

is eventually contained in every neighborhood of the set

, it is not true that

must tend to one of these points. An example is

goes to infinity). (The modulus

is not a field, nor a ring, and not even a group or semigroup. However, it still has several convenient properties:

In general, all laws of arithmetic are valid in

as long as all occurring expressions are defined.

Several functions can be continuously extended to

by taking limits. For instance, one defines

Some discontinuities may additionally be removed. For example, the function

can not be made continuous because the function approaches

approaches 0 from below, and

Compare the real projective line, which does not distinguish between

. As a result, on one hand a function may have limit

. On the other hand

correspond on the real projective line to only a limit from the right and one from the left, respectively, with the full limit only existing when the two are equal. Thus

cannot be made continuous at

on the real projective line.