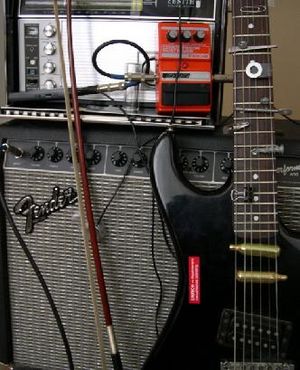 In music, extended technique is unconventional, unorthodox, or non-traditional methods of singing or of playing musical instruments employed to obtain unusual sounds or timbres.[1]

Examples of extended techniques include bowing under the bridge of a string instrument or with two different bows, using key clicks on a wind instrument, blowing and overblowing into a wind instrument without a mouthpiece, or inserting objects on top of the strings of a piano.

Twentieth-century exponents of extended techniques include Henry Cowell (use of fists and arms on the keyboard, playing inside the piano), John Cage (prepared piano), and George Crumb. The Kronos Quartet, which has been among the most active ensembles in promoting contemporary American works for string quartet, frequently plays music which stretches the manner in which sound can be drawn out of instruments.