Extraterritoriality is the state of being exempted from the jurisdiction of local law, usually as the result of diplomatic negotiations. Historically, this applied to individuals. Extraterritoriality can also be applied to physical places, such as foreign embassies, military bases of foreign countries, or offices of the United Nations. The three most common cases recognized today internationally relate to the persons and belongings of foreign heads of state, the persons and belongings of ambassadors and other diplomats, and ships in foreign waters.

Extraterritoriality is often extended to friendly or allied militaries, particularly for the purposes of allowing that military to simply pass through one's territory.

It is distinguished from personal jurisdiction in the sense that extraterritoriality operates to the prejudice of local jurisdiction.

During the thirteenth and fourteenth centuries, the Italian sea republics of Genoa and Venice managed to wrestle extraterritoriality for their quarters (Pera and Galata) in the Byzantine capital, Constantinople. They even battled among themselves for further control of the weakened empire.[1]

The most well-known cases of historical extraterritoriality concerned European nationals in 19th century China, Japan and Siam under the unequal treaties. 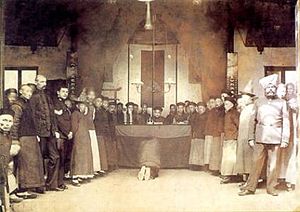 A hearing of the International Mixed Court at Shanghai, c. 1905

Extraterritoriality (without reciprocity) was first imposed upon China by the British in the Treaty of Nanking, resulting from the First Opium War. It was subsequently imposed upon China by the Americans under the Treaty of Wanghia and the Treaty of Tientsin. Shanghai in particular became a major center of foreign activity, as it contained two extraterritorial zones, the Shanghai International Settlement and the Shanghai French Concession. Chinese and non-treaty state nationals in these settlements were subject to Chinese law but were tried by the International Mixed Court[4] which had a Chinese judge and foreign assessor sitting on it.[5] After the collapse of the Chinese government in 1911, its members were subsequently appointed by the Western powers until 1927,[6] when it was replaced by the Shanghai Provisional Court,[7][8] which continued until 1929.[9] Foreign Nationals of treaty powers were tried by consular courts. The United Kingdom established the British Supreme Court for China in Shanghai in 1865 and the United States the United States Court for China[10] in the early 20th Century.

In 1921, an international resolution was signed expressing the willingness of the parties to end extraterritoriality in China once a satisfactory legal system was established by China.[11] As a result of the resolution, a commission was established in 1926 that published a detailed report containing its findings and recommendations for the Chinese legal system.[12]

Extraterritoriality in China for non-diplomatic personnel ended at various times in the twentieth century. In 1937, the status with respect to the various foreign powers China had diplomatic relations with was thus:[13]

Japan recognized extraterritoriality in the "treaties" concluded with the United States, the United Kingdom, France, Netherlands, and Russia in 1858, in connection with the concept of the "most favoured nation".[14] Most countries exercised extraterritorial jurisdiction through consular courts. Britain established the British Court for Japan in 1879.

Japan succeeded in reforming its unequal status with Britain through the Anglo-Japanese Treaty of Commerce and Navigation signed on 16 July 1894 in London. Similar treaties were signed with other extraterritorial powers at the same time. These treaties all came into effect in 1899.[15]

King Mongkut (Rama IV) of Siam signed the Bowring Treaty granting extraterritorial rights to Britain in 1855.[16] Sir Robert Hermann Schomburgk, British Consul-General from 1859 to 1864, gives an account of his judicial training and responsibilities in a letter to his cousin dated 6 September 1860.[17] Unequal treaties were later signed with 13 other European powers, as well as Japan.

In 1925–1926, the treaties were revised to provide for consular jurisdiction to be terminated, and nationals of the parties to the treaty were to come under the jurisdiction of Thai courts after the introduction of all Thai legal codes and a period of 5 years thereafter.[18] By 1930, extraterritoriality was in effect no longer in force.[19] After absolute monarchy was replaced by constitutional monarchy in the bloodless Siamese revolution of 1932, the constitutional government promulgated a set of legal codes, setting the stage for new treaties signed in 1937–1938 which canceled extraterritorial rights completely.[20]