From Infogalactic: the planetary knowledge core
(Redirected from Extreme points of Armenia)
Jump to: navigation, search 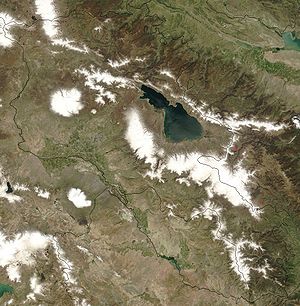 Armenia is a landlocked country in the Transcaucasia region, between the Black and Caspian Seas, bordered on the north and east by Georgia and Azerbaijan and on the south and west by Iran and Turkey.

The terrain is mostly mountainous and flat, with fast flowing rivers and few forests but with many trees. The climate is highland continental: hot summers and cold winters. The land rises to 4,095 m above sea-level at Mount Aragats.

Pollution from toxic chemicals such as DDT is not helping the already poor soil quality in many parts of the country.

Armenia is trying to address its environmental problems. It has established a Ministry of Nature Protection and introduced taxes for air and water pollution and solid waste disposal, whose revenues are used for environmental protection activities. Armenia is interested in cooperating with other members of the Commonwealth of Independent States (CIS, a group of 12 former Soviet republics) and with members of the international community on environmental issues. The Armenian Government is working toward closing the Armenian Nuclear Power Plant as soon as alternative energy sources are identified. 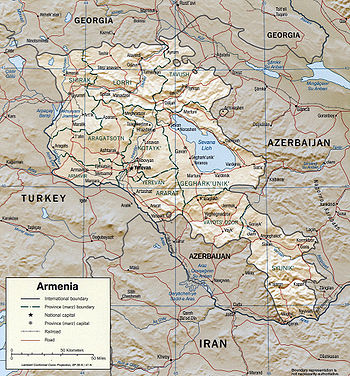 Armenia is located in southern Transcaucasia, the region southwest of Russia between the Black Sea and the Caspian Sea. Modern Armenia term means Republic of Armenia which occupies part of historical Armenia, whose ancient centres were in the valley of the Araks River and the region around Lake Van in Turkey. Armenia is bordered on the north by Georgia, on the east by Azerbaijan, on the southwest by the Nagorno-Karabagh, on the south by Iran, and on the west by Turkey. 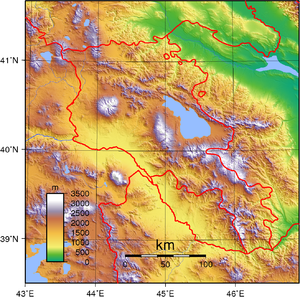 Twenty-five million years ago, a geological upheaval pushed up the Earth's crust to form the Armenian Plateau, creating the complex topography of modern Armenia. The Lesser Caucasus range extends through northern Armenia, runs southeast between Lake Sevan and Azerbaijan, then passes roughly along the Armenian-Azerbaijani border to Iran. Thus situated, the mountains make travel from north to south difficult. Geological turmoil continues in the form of devastating earthquakes, which have plagued Armenia. In December 1988, the second largest city in the republic, Leninakan (now Gyumri), was heavily damaged by a massive quake that killed more than 25,000 people.

About half of Armenia's area of approximately 29,800 km2 (11,505.8 sq mi) has an elevation of at least 2,000 m (6,562 ft), and only 3% of the country lies below 650 m (2,133 ft). The lowest points are in the valleys of the Araks River and the Debet River in the far north, which have elevations of 380 and 430 m (1,247 and 1,411 ft), respectively. Elevations in the Lesser Caucasus vary between 2,640 and 3,280 m (8,661 and 10,761 ft). To the southwest of the range is the Armenian Plateau, which slopes southwestward toward the Araks River on the Turkish border. The plateau is masked by intermediate mountain ranges and extinct volcanoes. The largest of these, Mount Aragats, 4,095 meters (13,435 ft) high, is also the highest point in Armenia. Most of the population lives in the western and northwestern parts of the country, where the two major cities, Yerevan and Gyumri (which was called Aleksandropol' during the tsarist period), are located.

The valleys of the Debet and Akstafa rivers form the chief routes into Armenia from the north as they pass through the mountains. Lake Sevan, 72.5 km (45 mi) across at its widest point and 376 km (233.6 mi) long, is by far the largest lake. It lies 2,070 m (6,791 ft) above sea level on the plateau. Terrain is most rugged in the extreme southeast, which is drained by the Bargushat River, and most moderate in the Araks River valley to the extreme southwest. Most of Armenia is drained by the Araks or its tributary, the Hrazdan, which flows from Lake Sevan. The Araks forms most of Armenia's border with Turkey and Iran while the Zangezur Mountains form the border between Armenia's southern province of Syunik and Azerbaijan's adjacent Nakhchivan Autonomous Republic. 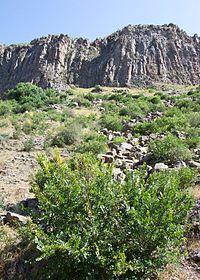 Temperatures in Armenia generally depend upon elevation. Mountain formations block the moderating climatic influences of the Mediterranean Sea and the Black Sea, creating wide seasonal variations. On the Armenian Plateau, the mean midwinter temperature is 0 °C (32 °F), and the mean midsummer temperature exceeds 25 °C (77 °F). Average precipitation ranges from 250 millimeters (9.8 in) per year in the lower Araks River valley to 800 millimeters (31.5 in) at the highest altitudes. Despite the harshness of winter in most parts, the fertility of the plateau's volcanic soil made Armenia one of the world's earliest sites of agricultural activity.

A broad public discussion of environmental problems began in the mid-1980s, when the first "green" groups formed in opposition to Yerevan's intense industrial air pollution and to nuclear power generation in the wake of the 1986 reactor explosion at Chernobyl'. Environmental issues helped form the basis of the nationalist independence movement when environmental demonstrations subsequently merged with those for other political causes in the late 1980s.

In the postcommunist era, Armenia faces the same massive environmental cleanup that confronts the other former Soviet republics as they emerge from the centralized planning system's disastrous approach to resource management. By 1980 the infrequency of sightings of Mount Ararat, which looms about sixty kilometers across the Turkish border, became a symbol of worsening air pollution in Yerevan.

In independent Armenia, environmental issues divide society (and scientists) sharply into those who fear "environmental time bombs" and those who view resumption of pollution-prone industrial operations as the only means of improving the country's economy. In the early 1990s, the latter group blamed Armenia's economic woes on the role played by the former in closing major industries.

Environmental conditions in Armenia have been worsened as a result of war with Azerbaijan over the historic Armenian region of Nagorno-Karabakh historically known as Artsakh. Hostilities along Armenian-Azerbaijan border disrupted crucial supply routes which Armenia was greatly dependent on. The winters of 1991-92, 1992–93, and 1993–94 brought enormous hardship to a population lacking heat and electric power. (The large-scale felling of trees for fuel during the winters has created another environmental crisis.) During these years, Azerbaijan closed its border with Armenia, rendering possibility of supplies from Azerbaijan an impossibility. This led the government to propose reconstruction of the Armenian Atomic Power Station at Metsamor, which was closed after the 1988 earthquake because of its location in an earthquake-prone area and which had the same safety problems as reactors listed as dangerous in Bulgaria, Russia, and Slovakia. After heated debates over startup continued through 1993, French and Russian nuclear consultants declared operating conditions basically safe. Continuation of the blockade into 1994 gave added urgency to the decision.

Another environmental concern is a significant drop in Lake Sevan's water level because of drawdowns for irrigation and the diversion of water to hydroelectric plants to compensate for the electric power lost through the inactivity of the nuclear plant at Metsamor. This crisis was addressed in 1992-93 by construction of a tunnel to divert water into the lake from the Arpa River. Engineers estimated that once the project is finished, the tunnel will allow 500 million cubic meters of water to be drawn from the lake annually, while maintaining a constant water level. The Ministry of the Environment reported that the lake's water level had dropped by fifty centimeters in 1993. Experts said that this drop brought the level to within twenty-seven centimeters of the critical point where flora and fauna would be endangered.

Among major industrial centers closed to curtail pollution were the Nairit Chemical Plant, the Alaverdy Metallurgical Plant, and the Vanadzor Chemical Combine. Economic requirements triumphed over environmental considerations when the Soviet-era Nairit plant was reopened in January 1992 after being closed in 1989 because of the massive air pollution it caused. Newly independent Armenia needed the income from foreign sales of Nairit rubber and chemical products, many of which had been assigned exclusively to that plant under the Soviet system and were still unavailable elsewhere to the former Soviet republics in the early 1990s. Up-to-date environmental safety technology and adherence to international standards were promised at Nairit when the decision to resume production was announced.

Environment - current issues: soil pollution from toxic chemicals such as DDT; energy blockade, the result of conflict with Azerbaijan, has led to deforestation when citizens scavenged for firewood; pollution of Hrazdan (Razdan) and Araks Rivers; the draining of Sevana Lich (Lake Sevan), a result of its use as a source for hydropower, threatens drinking water supplies; restart of Metsamor nuclear power plant without adequate (IAEA-recommended) safety and backup systems

country comparison to the world: 149

Resources and land use

Total renewable water resources: 7.77 m³ (2011) Armenia is considered to be a big water “supplier” in the Caspian basin; as a result, the country lacks water, especially in summer when the rate of evaporation exceeds the amount of precipitation. That is the main reason why people here since ancient times have built water reservoirs and irrigation canal. Lake Sevan contains the largest amount of water in the country.

landlocked in the Lesser Caucasus Mountains; Sevana Lich (Lake Sevan) is the largest lake in this mountain range