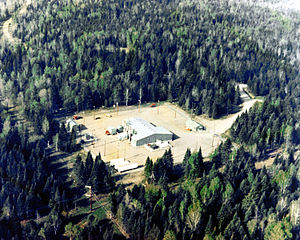 Extremely low frequency (ELF) is the ITU designation[1] for electromagnetic radiation (radio waves) with frequencies from 3 to 30 Hz, and corresponding wavelengths from 100,000 to 10,000 kilometers.[2][3] In atmospheric science, an alternative definition is usually given, from 3 Hz to 3 kHz.[4][5] In the related magnetosphere science, the lower frequency electromagnetic oscillations (pulsations occurring below ~3 Hz) are considered to lie in the ULF range, which is thus also defined differently from the ITU radio bands.

ELF radio waves are generated by lightning and natural disturbances in Earth's magnetic field, so they are a subject of research by atmospheric scientists. Because of the difficulty of building antennas that can radiate such long waves, ELF frequencies have been used in only a very few human-made communication systems. ELF waves can penetrate seawater, which makes them useful in communication with submarines. The US, Russia, and India are the only nations known to have constructed ELF communication facilities.[6][7][8][9][9][10][11][12][13] The U.S. facilities were used between 1985 and 2004 but are now decommissioned.[9] ELF waves can also penetrate significant distances into earth or rock, and "through-the-earth" underground mine communication systems use frequencies of 300 to 3000 Hz. The frequency of alternating current flowing in electric power grids, 50 or 60 Hz, also falls within the ELF band, making power grids an unintentional source of ELF radiation.

Because of its electrical conductivity, seawater shields submarines from most higher frequency radio waves, making radio communication with submerged submarines at ordinary frequencies impossible. Signals in the ELF frequency range, however, can penetrate much deeper. Two factors limit the usefulness of ELF communications channels: the low data transmission rate of a few characters per minute and, to a lesser extent, the one-way nature due to the impracticality of installing an antenna of the required size on a submarine (the antenna needs to be of an exceptional size in order to achieve successful communication). Generally, ELF signals were used to order a submarine to rise to a shallow depth where it could receive some other form of communication.

One of the difficulties posed when broadcasting in the ELF frequency range is antenna size, because the length of the antenna must be at least a substantial fraction of the length of the waves. Simply put, a 3 Hz (cycle per second) signal would have a wavelength equal to the distance EM waves travel through a given medium in one third of a second. Taking account of refractive index, ELF waves propagate slightly slower than the speed of light in a vacuum. As used in military applications, the wavelength is 299,792 km (186,282 mi) per second divided by 50–85 Hz, which equals around 3,500 to 6,000 km (2,200 to 3,700 mi) long. This is comparable to the Earth's diameter of around 12,742 km (7,918 mi). Because of this huge size requirement, to transmit internationally using ELF frequencies, the Earth itself forms a significant part of the antenna, and extremely long leads are necessary into the ground. Various means, such as electrical lengthening, are used to construct practical radio stations with smaller sizes.

The US maintained two sites, in the Chequamegon-Nicolet National Forest, Wisconsin and in the Escanaba River State Forest, Michigan (originally named Project Sanguine, then downsized and rechristened Project ELF prior to construction), until they were dismantled, beginning in late September 2004. Both sites used long power lines, so-called ground dipoles, as leads. These leads were in multiple strands ranging from 22.5 to 45 kilometres (14.0 to 28.0 mi) long. Because of the inefficiency of this method, considerable amounts of electrical power were required to operate the system.

There have been some concerns over the possible ecological impact of ELF signals. In 1984 a federal judge halted construction, requiring more environmental and health studies. This judgment was overruled by a federal appeals court on the basis that the US Navy claimed to have spent over 25 million dollars studying the effects of the electromagnetic fields, with results indicating that they were similar to the effect produced by standard power distribution lines. The judgment was not accepted by everyone and, during the time that ELF was in use, some Wisconsin politicians such as Senators Herb Kohl, Russ Feingold and Congressman Dave Obey called for its closure. Similar concerns have, in the past, been raised about electromagnetic radiation and health.

Transmitters in the 22 Hz range are also found in pipeline inspection gauges, also known as "PIGs". The signal is generated as an alternating magnetic field, the transmitter is mounted to or part of the PIG. The PIG is pushed through a pipeline, mostly made of metal. The ELF signal can be detected through the metal on the outside. It is needed to check if a PIG has passed a certain location and to locate a stuck PIG.

Some radio hams record ELF (or even lower) signals from very large homemade antennas, and play them back at higher speeds to catch natural fluctuations in the Earth's electromagnetic field. Increasing the playback speed increases the pitch, so that it can be brought into the audio frequency range for audibility.

Naturally occurring ELF waves are present on Earth, resonating in the region between ionosphere and surface. They are initiated by lightning strikes that make electrons in the atmosphere oscillate.[23] Though VLF signals were predominantly generated from lightning discharges, it was found that an observable ELF component (slow tail) followed the VLF component in almost all cases.[24] The fundamental mode of the Earth-ionosphere cavity has the wavelength equal to the circumference of the Earth, which gives a resonance frequency of 7.8 Hz. This frequency, and higher resonance modes of 14, 20, 26 and 32 Hz appear as peaks in the ELF spectrum and are called Schumann resonance.

ELF waves have also been tentatively identified on Saturn's moon Titan. Titan's surface is thought to be a poor reflector of ELF waves, so the waves may instead be reflecting off the liquid-ice boundary of a subsurface ocean of water and ammonia, the existence of which is predicted by some theoretical models. Titan's ionosphere is also more complex than Earth's, with the main ionosphere at an altitude of 1,200 km (750 mi) but with an additional layer of charged particles at 63 km (39 mi). This splits Titan's atmosphere into two separate resonating chambers. The source of natural ELF waves on Titan is unclear as there does not appear to be extensive lightning activity.[23]

Huge ELF radiation power outputs of 100,000 times the Sun's output in visible light may be radiated by magnetars. The pulsar in the Crab nebula radiates powers of this order at the frequency 30 hertz.[25] Radiation of this frequency is below the plasma frequency of the interstellar medium, thus this medium is opaque to it, and it cannot be observed from Earth.

In electromagnetic therapy and electromagnetic radiation and health research, electromagnetic spectrum frequencies between 0 and 100 hertz are considered extremely low-frequency fields.[26] Since the late 1970s, questions have been raised whether exposure to ELF electric and magnetic fields (EMF) within this range of frequencies produces adverse health consequences.[18] In October 2005, WHO convened a Task Group of scientific experts to assess any risks to health that might exist from "exposure to ELF electric and magnetic fields in the frequency range >0 to 100,000 Hz (100 kHz) in regards to childhood leukaemia."[18] There are established biological effects from acute exposure at high levels (well above 100 µT) that are explained by recognized biophysical mechanisms[citation needed]. External ELF magnetic fields induce electric fields and currents in the body which, at very high field strengths, cause nerve and muscle stimulation and changes in nerve cell excitability in the central nervous system. Health effects related to short-term, high-level exposure have been established and form the basis of two international exposure limit guidelines (ICNIRP, 1998; IEEE, 2002). At present, these bodies consider the scientific evidence related to possible health effects from long-term, low-level exposure to ELF fields insufficient to justify lowering these quantitative exposure limits. The long-term, low-level exposure is evaluated as average exposure to residential power-frequency magnetic field above 0.3 to 0.4 µT, and it is estimated that only between 1% and 4% of children live in such conditions.[18] A common source of ELF fields in the United States is 60 Hz electric and magnetic fields from high-voltage electric power transmission lines and secondary distribution lines, such as those found in residential neighborhoods.[17][18][26]

In summary, when all of the studies are evaluated together, the evidence suggesting that EMFs may contribute to an increased risk of cancer is very weak.[27][28] Epidemiological studies suggest a possible association between long term occupational exposure to ELF and Alzheimer's disease.[29][30]

A study by Reilly in 1999 showed that the threshold for direct perception of exposure to ELF RF by human volunteer subjects started at around 2 to 5 kV/m at 60 Hz, with 10% of volunteers detecting the ELF exposure at this level. The percentage of detection increased to 50% of volunteers when the ELF level was raised from 7 to 20 kV/m. 5% of all test subjects considered the perception of ELF at these thresholds annoying.[31]

ELF at human perceivable kV/m levels was said to create an annoying tingling sensation in the areas of the body in contact with clothing, particularly the arms, due to the induction of a surface charge by the ELF. 7% of volunteers described the spark discharges as painful where the subject was well-insulated and touched a grounded object within a 5 kV/m field. 50% of volunteers described a similar spark discharge as painful in a 10 kV/m field.[32]