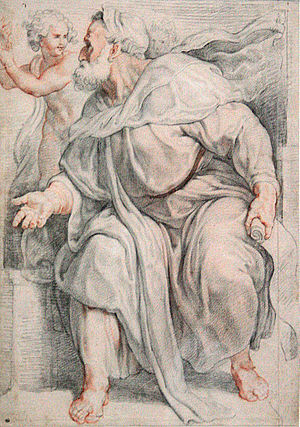 Ezekiel (/ᵻˈziːki.əl/; Hebrew: יְחֶזְקֵאל, Y'ḥez'qel, Hebrew pronunciation: [jəħezˈqel]), meaning "May God strengthen him", "God will strengthen" (from חזק, ḥazaq, [ħaˈzaq], literally "to fasten upon", figuratively "strong", and אל, el, [ʔel], literally "God", and so figuratively "The Almighty") is the central protagonist of the Book of Ezekiel in the Hebrew Bible.

In Judaism, Christianity, Islam and the Bahá'í Faith, Ezekiel is acknowledged as a Hebrew prophet. In Judaism and Christianity, he is also viewed as the author of the Book of Ezekiel that reveals prophecies regarding the destruction of Jerusalem, the restoration to the land of Israel and the Millennial Temple visions, or the Third Temple.

The author of the Book of Ezekiel presents himself as Ezekiel, the son of Buzzi,[Ezekiel 1:3] born into a priesthood (Kohen) lineage[1] of the patrilineal line of Ithamar, and resident of Anathoth. Apart from identifying himself, the author gives a chronology for the first divine encounter which he will present. He states that it happened "in the thirtieth year",[Ezekiel 1:1, 2] which may be a reference to his age at the time. In such a case, the approximate year of birth is 622 BC. He also dates the event 5 years after the exile of King of Judah Jehoiachin by the Babylonians, a recurring dating pattern throughout the book. Josephus claims that under at the request of Nebuchadnezzar II, Babylonian armies exiled three thousand Jews[2] from Judah, after deposing King Jehoiachin in 598 BC.

According to the Bible, Ezekiel and his wife lived on the bank of the Chebar River, in Tel Abib[3] (Mound of the Deluge) where exiles from Judah came to seek his prophetic insights.[Ezekiel 1:1,3:15] There is no mention of him having any offspring. Only that his wife died rather young, in the ninth year of exile, when Ezekiel was 34 years of age.[Ezekiel 24:1, 18]

Ezekiel describes his calling to be a prophet by going into great detail about his encounter with God and four living creatures or Cherubim with four wheels that stayed beside the creatures.[Ezekiel 1] For the next five years he incessantly prophesied and acted out the destruction of Jerusalem and its temple, which was met with some opposition. However, Ezekiel and his contemporaries like Jeremiah, another prophet who was living in Jerusalem at that time, witnessed the fulfillment of their prophecies when Jerusalem was finally sacked by the Babylonians. The date of the sacking, 587 BC,[citation needed] is confirmed by Babylonian cuneiform records discovered by archeologists. Ezekiel was 50 years old when he began to have visions of a new Temple. He served as a prophet for at least 22 years until, according to[citation needed], Ezekiel last experienced an encounter with God in April 570 BC.[Ezekiel 29:16] His time of death has not been recorded. 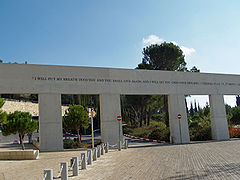 Monument to Holocaust survivors at Yad Vashem in Jerusalem. The quote is Ezekiel 37:14.

Ezekiel, like Jeremiah, is said by Talmud[4] and Midrash[5] to have been a descendant of Joshua by his marriage with the proselyte Rahab. Some statements found in rabbinic literaturez[6] posits that Ezekiel was the son of Jeremiah, who was (also) called "Buzi" because he was despised by the Jews.

Ezekiel was said to be already active as a prophet while in the Land of Israel, and he retained this gift when he was exiled with Jehoiachin and the nobles of the country to Babylon.[7]

Rava states in the Babylonian Talmud that although Ezekiel describes the appearance of the throne of God (Merkabah), this is not because he had seen more than the prophet Isaiah, but rather because the latter was more accustomed to such visions; for the relation of the two prophets is that of a courtier to a peasant, the latter of whom would always describe a royal court more floridly than the former, to whom such things would be familiar.[8] Ezekiel, like all the other prophets, has beheld only a blurred reflection of the divine majesty, just as a poor mirror reflects objects only imperfectly.[9]

According to the midrash Canticles Rabbah, it was Ezekiel whom the three pious men, Hananiah, Mishael, and Azariah (also called Shadrach, Meshach, and Abednego in the Bible) asked for advice as to whether they should resist Nebuchadnezzar's command and choose death by fire rather than worship his idol. At first God revealed to the prophet that they could not hope for a miraculous rescue; whereupon the prophet was greatly grieved, since these three men constituted the "remnant of Judah". But after they had left the house of the prophet, fully determined to sacrifice their lives to God, Ezekiel received this revelation: "Thou dost believe indeed that I will abandon them. That shall not happen; but do thou let them carry out their intention according to their pious dictates, and tell them nothing".[10]

Russian icon of the Prophet Ezekiel holding a scroll with his prophecy and pointing to the "closed gate" (18th century, Iconostasis of Kizhi monastery, Russia)

Ezekiel is commemorated as a saint in the liturgical calendar of the Eastern Orthodox Church—and those Eastern Catholic Churches which follow the Byzantine Rite—on July 23 (for those churches which use the traditional Julian Calendar, July 23 falls on August 5 of the modern Gregorian Calendar).[11] Ezekiel is commemorated on August 28 on the Calendar of Saints of the Armenian Apostolic Church, and on April 10 in the Roman Martyrology.

The Church Fathers interpret Ezekiel's vision of the human likeness upon the sapphire throne (Ezekiel 1:26) as a prophecy of the Incarnation of the Logos from the Theotokos (Virgin Mary), who in many ancient church hymns is called the "living Throne of God".[citation needed]

Ezekiel's statement about the "closed gate" (Ezekiel 44:2–3) is understood[weasel words] as another prophecy of the Incarnation: the "gate" signifying the Virgin Mary and the "prince" referring to Jesus. This is one of the readings at Vespers on Great Feasts of the Theotokos in the Eastern Orthodox and Byzantine Catholic Churches.[citation needed] This imagery is also found in the traditional Catholic Christmas hymn "Gaudete" and in a saying by Saint Bonaventure, quoted by Alphonsus Maria de' Liguori: "No one can enter Heaven unless by Mary, as though through a door."[12] The imagery provides the basis for the concept that God gave Mary to mankind as the "Gate of Heaven" (thence the dedication of churches and convents to the Porta Coeli), an idea also laid out in the Salve Regina (Hail Holy Queen) prayer.

According to Matthew Henry a Bible commentator who flourished in the 17th century, Ezekiel is also believed to have been known as Nazaratus Assyrius, a teacher to Pythagoras. However, James Ussher, in his writings of the Ussher chronology, republished as "The Annals of the World" claims that this is a mistake, basing his opinion on the writings of Clemens Alexandrinus. However, Sir William Smith, in his "Bible Dictionary," points out that John Selden, among others, consider it a possibility. In the book "Pythagoras: Greek philosopher" it states; "Nazaratus, the Assyrian, one of Pythagoras' masters, was supposed to be the prophet Ezekiel, and Thomas Stanley's Life of Pythagoras says that Ezekiel and Pythagoras flourished together.

Since 1830, The Church of Jesus Christ of Latter-day Saints has identified the Book of Mormon with the "record of the stick of Ephraim"[13] (Ezekiel 37:16) while the stick of Judah is identified with the Bible.

Ezekiel is recognized as a prophet in Islamic tradition. Although not mentioned in the Qur'an by the name, all Muslim scholars, both classical[14] and modern[15] have included Ezekiel in lists of the prophets of Islam.

The Qur'an mentions a prophet called Zul-Kifl. This prophet is sometimes identified with Ezekiel although Zul-Kifl's identity is disputed. Carsten Niebuhr, in his Reisebeschreibung nach Arabian,[16] says he visited Al Kifl in Iraq, midway between Najaf and Hilla and said Kifl was the Arabic form of Ezekiel. He further explained in his book that Ezekiel's Tomb was present in Al Kifl and that the Jews came to it on pilgrimage. The name Zul-Kifl would mean "One of double", as Zul in Arabic means "double". Some Islamic scholars have likened Ezekiel's mission to the description of Dhul-Kifl. When the exile, monarchy, and state were annihilated, a political and national life was no longer possible. In the absence of a worldly foundation it became necessary to build a spiritual one and Ezekiel performed this mission by observing the signs of the time and deducing his doctrines from them. In conformity with the two parts of his book, his personality and his preaching are alike twofold, and the title Zul-Kifl means "the one of double" Aside from the possible identification of Zul-Kifl with Ezekiel, Muslims have viewed Ezekiel as a prophet, regardless of his identification with Zul-Kifl. Ezekiel appears in all Muslim collections of Stories of the Prophets.[17] Muslim exegesis further lists Ezekiel's father as Buzi (Budhi) and Ezekiel is given the title ibn al-adjus, denoting "son of the old", as his parents are supposed to have been very old when he was born. A tradition, which resembles that of Hannah and Samuel in the Hebrew Bible, states that Ezekiel's mother prayed to God in old age for the birth of an offspring and was given Ezekiel as a gift from God.[18]

The tomb of Ezekiel is a structure located in modern day south Iraq near Kefil, believed to be the final resting place of Ezekiel.[19] It has been a place of pilgrimage to both Muslims and Jews alike. After the Jewish exodus from Iraq, Jewish activity in the tomb ceased although a disused synagogue remains in place.[20]