Fécamp is a commune in the Seine-Maritime department in the Haute-Normandie region in northern France.

Fécamp is situated in the valley of the Valmont river, at the heart of the Pays de Caux, on the Albaster Coast. It is around 35 km northeast of Le Havre, and around 60 km northwest of Rouen.

According to its late medieval founding legend, the trunk of a fig tree (ficus) carrying the Precious Blood of Christ collected by Joseph of Arimathea was washed ashore on the riverbank at Fécamp in the 1st century. Immediately, a fountain of holy blood gushed from the site; the relic attracted many medieval pilgrims, enhancing the reputation of the city.

The monks' legend justified the artificial etymology of the name to Fici-campus, the camp of the fig tree. Fécamp, however, is mentioned in 875 as Fiscannum and in 990 as Fiscannus and as late as 1496[1] which stem from the Germanic root fisc (English "fish") with an unknown suffix. It used to be the name of the Valmont River.

The prehistoric site, on the high ground inland from the port of Fécamp, reveals human occupation dating back to Neolithic times. Spreading over 21 hectares, surrounded by walls and ditches for a length of nearly 2000 meters, including a praetorian door. Objects recovered range in date from the Neolithic until Roman times.

Many items of the Gallo-Roman period have been found locally, particularly coins (including two gold Gallic coins found in 1839). A bronze axe, of Celtic design, was unearthed in 1859.

Fécamp was on the ancient road linking Arques-la-Bataille and Lillebonne with the north of Gaul. The archaeological diggings around the Ducal palace (in the grounds of the present abbey) in 1973-1984 revealed some evidence of the La Tène Celtic culture and Gallo-Roman works. Two Gallo-Roman cemeteries have also been discovered.

During Roman times, a road linked Fécamp to Étretat, passing through the present-day village of Fond-Pitron. The current D940 follows the original Roman road. 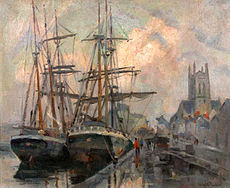 More from the Middle Ages

In the 6th century, Saint Leger was exiled to Fécamp. In 932, William I of Normandy (Long-Sword) founded the castle that was to be the residence of the Dukes of Normandy up until 1204, after which, the Norman Duchy was integrated within the French royal domain. The castle was the birthplace of many Norman dukes, including Richard I of Normandy (born 933) and Richard II of Normandy (who died 22 August 1027).

In 1202, King John of England granted a community system to Fécamp. In 1410 the English razed the town. In 1449, Fécamp was freed from English occupation.

For Fécamp, the Wars of religion finished in July 1593, when Captain de Bois-Rosé rallied the city to Henry IV of France after his conversion to Catholicism.[2] It was at Fécamp that Charles II of England landed, in October 1651, soon after the Battle of Worcester, where he had been finally defeated by Cromwell. 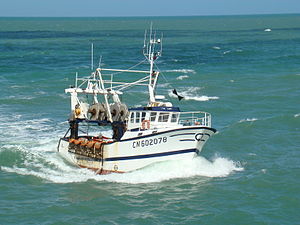 A fishing boat returns to port 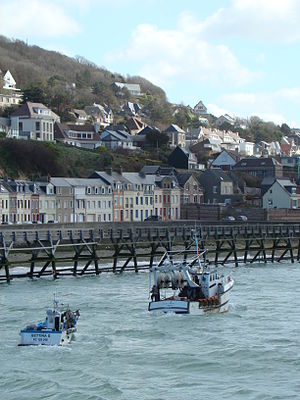 The history of Fécamp has always revolved around the fishing industry and its harbour (first mentioned in the 11th century). The reputation of the salt-herrings of Fécamp was established as early as the 10th century, that of smoked herrings from the 13th century. An association of whale fishermen was created in the 11th century. Fishing for cod started commercially in the 16th century, under the impetus of Nicolas Selles, an early shipping magnate. Throughout the 19th century and the early part of the 20th century, Fécamp had an important role as the chief fishing port in France for cod and cod-related fish. This was the case up until the 1970s, when Canada stopped all access to their fishing grounds. First practiced by three-masted sailing ships, Atlantic fishing trips could last more than six months, the time taken to fill the hold with cod, which were salted to preserve them.

The fishing was actually carried out in small boats, carrying only two or three fishermen. Many of these small boats would be lost in the fog and never returned to the ship. As technology evolved, the three-mast boats disappeared, giving way to steamers, then to diesel-engined vessels. These days, only a small fishing fleet survives, restricted to fishing around coastal waters. In the harbour, pleasure-boats have taken the place of all but a few fishing-boats. 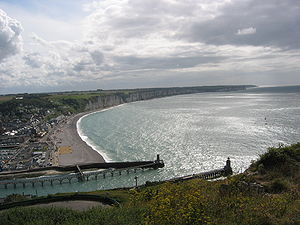 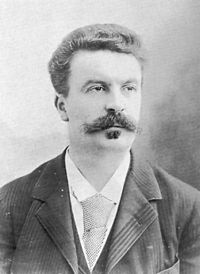